Natera (NTRA -2.46%) has quietly grown its market cap by more than 875% in the past five years, trouncing the 103% gains of the S&P 500 over that time frame. The $10.25 billion med-tech company, which honed its diagnostics craft on non-invasive blood testing to screen for fetal genetic abnormalities such as Down syndrome, is now starting to gain traction in oncology diagnostics -- the turf of Guardant Health (GH -3.11%) and ARK Genomic Revolution ETF holding Adaptive Biotechnologies (ADPT -4.33%).

Natera's testing volume in its non-invasive reproductive health segment has grown every year since 2013 -- from approximately 88,000 tests that year to over 1 million in 2020. Volume has even grown through the pandemic, exceeding pre-COVID-19 growth targets. And the company still enjoys significant tailwinds, with the American College of Obstetricians and Gynecologists reaffirmed its recommendation for chromosomal defect screening as an option for all women regardless of age or risk factors in August 2020.

This has led to a majority of insurers reimbursing for the test, dubbed Panorama. The market-beating biotech estimates that over 90% of all commercially covered (i.e., non-governmentally-insured) patients are eligible to have Panorama testing covered regardless of age or risk. In the most recent conference call, CEO Steve Chapman estimated Natera is getting close to 30% penetration in the approximately 3.4 million "average-risk" births in the U.S., leaving plenty of room for growth. 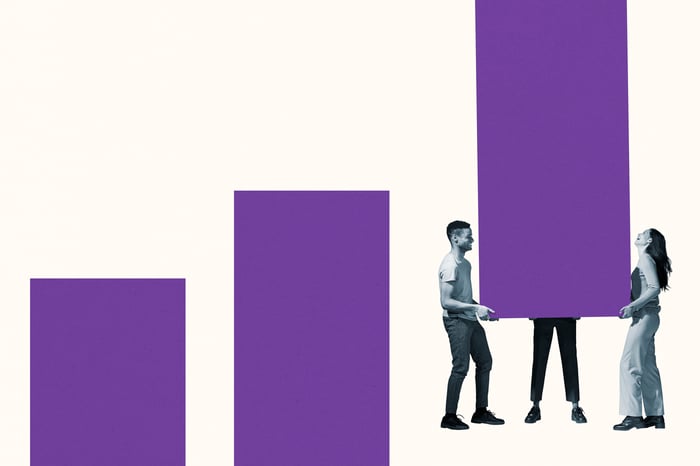 While maintaining a leadership position in the reproductive health diagnostics market, Natera has since added other avenues for expansion. It is now looking toward the $15 billion minimal residual disease (MRD) oncology market. MRD testing screens for a very small number of cancer cells that remain in the body during or after treatment, which can provide guidance on further treatment as well as prognosis. By entering the MRD ring, Natera is squarely aimed at overtaking ARK Genomic holding Adaptive Biotechnologies as well as Guardant Health, both of which also market MRD tests.

Natera pulled no punches in its most recent earnings release, going so far as to call out Guardant's test by name. Per the company's most recent earnings release, "Signatera had better sensitivity in assessing whether stage III colorectal cancer patients who test MRD-negative could be safely de-escalated from chemotherapy... than a competing MRD test called Reveal, which is not tumor informed."

Given Signatera's 94% sensitivity for recurrence of colorectal cancer (versus Reveal's 47%), and with a sample failure rate in its study of less than 3% (versus a double-digit failure rate in Guardant publications), Natera has a point. With more than 1 million colorectal MRD tests up for grabs annually and Signatera being reimbursed at $3,500 per test, that's a $3.5 billion addressable market. Guardant, meanwhile, is not going down without a fight, pursuing legal action against Nateraand updating its prior press releases to suggest Reveal has industry-leading sensitivity as well.

With an ability to predict relapse with greater than 98% accuracy for breast, lung, and bladder cancer -- which equates to another potential 1.4 million tests annually -- Signatera is already approved for more than just colorectal cancer MRD monitoring. Add in that Natera has over 50 ongoing MRD studies for 14 other cancers including multiple myeloma, liver, pancreatic, and prostate cancer, and it's clear that Natera wants to take over this $15 billion total addressable market.

Adaptive Biotechnologies' clonoSEQ MRD test currently has an Achilles' heel, as it is currently only available to detect MRD in bone marrow from multiple myeloma patients -- meaning that it requires a bone marrow biopsy each and every time it's performed. Natera's General Manager of Oncology & Transplant, Solomon Moshkevich, was quick to remind listeners of that on the most recent conference call.

While clonoSEQ is already up for FDA review as a blood test for a different type of blood cancer called acute lymphoblastic leukemia and already approved as a blood test for chronic lymphocytic leukemia, Moshkevich focused on the multiple myeloma opportunity at hand. He reported that there is an addressable market for MRD testing and monitoring of 35,000 new multiple myeloma patients per year in the U.S., plus 150,000 that have had a prior diagnosis that warrant continued surveillance. Moshkevich also suggested that current multiple myeloma patients may choose to avoid recurrent MRD testing due to the need for a painful bone marrow biopsy.

While the treatment is not currently approved for multiple myeloma MRD, Natera obviously has its eyes on this market and showcased intriguing early results at the June 2021 American Society of Clinical Oncology (ASCO) meeting. That data suggested that Signatera could predict relapse after stem cell transplant 93% of the time, versus 68% for bone marrow biopsy just three months after transplant.

Growing through the pandemic

This growing diagnostics company also has deals with pharmaceutical companies to use Natera's MRD testing as a surrogate endpoint for clinical trials. Since patients with residual disease based on Signatera results are more likely to demonstrate drug efficacy, the drug maker can then utilize repeated Signatera testing to monitor for drug efficacy, resulting in faster study results.

Natera's average pharmaceutical deal size is getting larger, too, and it has multiple partnerships in phase 3 trials under way. With more than $65 million in pharma development revenue in 2020, up from just $9 million in 2018, this is impressive growth considering that Guardant's pharma test volume was down 33% in Q1 2021. Not only that, but any approval will likely require Signatera monitoring, fueling further future sales of the diagnostic.

Between Natera's MRD, reproductive health, and pharma business segments, this diagnostics company is so confident in its prospects that it has even raised revenue guidance by 10% for full-year 2021. And speaking of revenue growth, Natera produced that in Q1 2021 to the tune of 62% year over year, more than triple Guardant Health's 17%.

But can Natera keep up this pace? It certainly seems to be firing on all cylinders compared to its peers. Its total test volume in Q1 was up 48% year over year for the quarter, compared to just a 21% increase for Guardant's clinical customers and a 35% increase for Adaptive's clonoSEQ. Its price-to-sales ratio (P/S) still looks cheap at 20, versus 40 for Guardant and an even higher 46 for Adaptive.

The one knock on Natera is that its gross margins are lagging at 56%, versus 63% for Guardant and 76% for Adaptive -- though I view the room for improvement as a potential positive. With room for margin improvement and a P/S ratio lower than its competition, if Natera can continue to make inroads in its oncology and pharma markets, both healthcare investors and ARK Invest leader Cathie Wood may want to add it to their watch lists.

Should You Buy Natera Stock Despite the Scathing Short-Seller Report From Hindenburg?