The stock market continued to power ahead on Friday, closing another strong week. The Nasdaq Composite (NASDAQINDEX:^IXIC) was on track to set another potential record high, with the index up about a third of a percent as of 11:30 a.m. EDT.

A lot of Nasdaq investors focus on the biggest companies in the index, which includes a number of the most popular tech giants on the planet. Yet often, smaller companies and even those making their debut on the Nasdaq are more worthy of headlines. On Friday, newly listed Eco Wave Power Global (Nasdaq: WAVE) and little-followed biotech company Alector (NASDAQ:ALEC) made the biggest impact on investor sentiment to end the week.

Shares of Eco Wave Power Global were among the most widely followed on the Nasdaq on Friday. The innovative marine power company had some challenges pricing its initial public offering, but retail investors were quick to bid up the stock sharply once trading began. 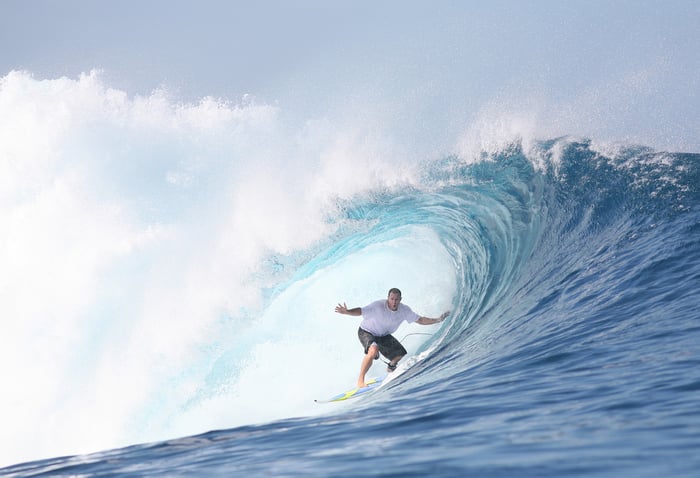 Eco Wave is based in Sweden and uses the power of ocean waves to generate energy. The company initially hoped to price its IPO between $10 and $12 per share, but it ended up offering just 1 million shares at $8 per share.

Yet by the time investors caught wind of the offering, they rushed to buy shares. The stock opened at $23.76 per share, nearly triple the IPO price, and rose above the $27 mark by midday. Volume was heavy at 12 million shares, especially when you consider the limited 1 million share float available, and showed the appetite among short-term traders to try to cash in on the suddenly popular offering.

Renewable energy plays have been popular for a long time, and Eco Wave's approach to harness the power of the sea is one that hasn't gotten a lot of attention from investors previously. If it's successful, then Eco Wave has a huge amount of potential to grow from its modest beginnings.

Elsewhere, shares of Alector jumped more than 60%. The dementia drug specialist made a big deal with a major pharmaceutical giant that should improve its financial position dramatically.

Alector and GlaxoSmithKline (NYSE:GSK) announced that they will collaborate in the immuno-neurology space to promote two clinical-stage monoclonal antibodies to treat neurodegenerative diseases. Co-development and commercialization of Alector's AL001 and AL101 candidate treatments for diseases including Alzheimer's disease, Parkinson's disease, Lou Gehrig's disease, and frontotemporal dementia will combine Alector's expertise in dementia treatment with Glaxo's vast resources. Under the deal, Glaxo will have exclusive commercialization rights globally, with the two companies sharing profits from the U.S. market.

The deal will pay Alector $700 million upfront, which the company will find valuable in building out the rest of its pipeline. Meanwhile, Alector could get milestone payments, royalties, and profit sharing up to another $1.5 billion. Combined, those payments would exceed Alector's market capitalization coming into the trading day.

Alector has faced some challenges, especially in light of competing products for treating Alzheimer's getting the green light from the U.S. Food and Drug Administration before it could. Nevertheless, with big money coming in and other pipeline prospects ahead, Alector looks like it's in a great position to thrive from here.