Biotech is an industry that has deeply enriched investors' pockets and helped numerous patients alike -- most recently in the form of coronavirus vaccine companies working to contain the once-in-a-lifetime pandemic. The sector is not without its risks, however. A few small-cap players using questionable science have sold investors on false dreams of miracle drugs that could become game-changers in their field, and in these cases, that couldn't be further from the truth.

Avoiding bad investments is just as important as making good ones. So let's look at the dark side of investing in biotech and which companies to stay well away from. 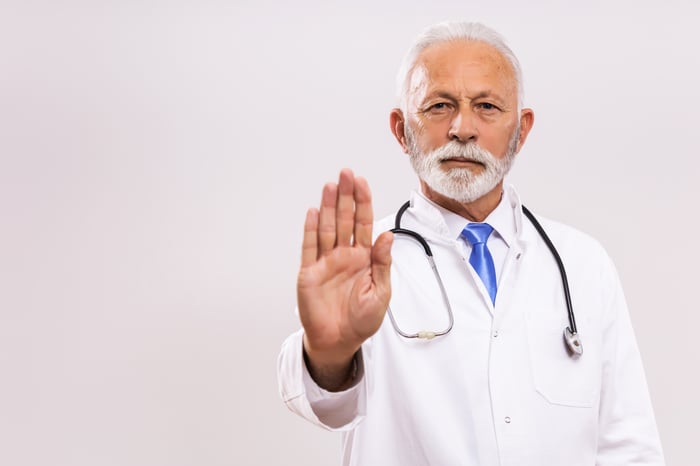 Sometimes, one is dealt a bad hand in life and will need to bluff. However, it's a whole different story to double down on a bluff after one's cover is blown.

Take the case of Cel-Sci (CVM 5.25%), a small-cap biotech with a single late-stage immunotherapy candidate (Multikine) for treating head and neck cancer. On June 28, Cel-Sci announced that Multikine failed to achieve the primary endpoint of boosting patient survival by 10% compared to standard-of-care treatments in a decade-long phase 3 trial. As a result, the stock lost 66% of its value within four days, to $8.65.

It's pretty hard to walk away from a giant bluff when there's just too much in the pot. In a conference call to investors on July 1, CEO Geert Kersten heralded the study as a "success," saying that a cohort of patients who received Multikine plus surgery plus radiotherapy "met the primary endpoint," and that Cel-Sci plans to file for regulatory approval. Later on in the call, chief scientific officer Taylor Eval denied all allegations the company was data-mining the study. On a side note, Kersten said he will "not be releasing the [full] data to shareholders."

The data that management is referring to is from a subgroup of patients in the Multikine cohort who did not receive chemotherapy in the study. This group of patients survived 14.3% longer after five years than the group who received no Multikine at all -- but that does not mean Multikine works on patients without chemotherapy. It has nothing to do with the study's primary endpoint (which includes both patients who did and did not receive chemotherapy). So the data-mining here is, in fact, pretty evident.

It's also very easy to see how the drug could have a placebo effect. In clinical trials, Multikine was injected in or around the tumor. In case one was wondering, injecting just about anything into a tumor causes the cancer cells to die off -- partly due to needle damage. Moreover, patients in the 9.5-year study received Multikine for just three weeks and were not treated with the drug if their cancer relapsed. So anything (such as lifestyle choices, receiving other immunotherapies post-relapse, etc.) could have been behind the survival difference in the subgroups.

Before the results came out (which took over a year), Cel-Sci bagged $31.7 million in cash by selling new stock to retail investors, resulting in heavy losses for shareholders less than three weeks after the deal closed. Overall, given the failure of its flagship candidate, the less than $50 million in assets on its books, and questionable conduct from management, this is definitely a biotech you don't want to be holding anytime soon (if not ever).

CytoDyn (CYDY -7.32%) is a biotech known for developing leronlimab, an antibody that failed two phase 3 clinical studies for treating COVID-19. In May, the U.S. Food and Drug Administration (FDA) even released a rare statement saying that the drug did not meet the primary endpoints in these studies.

In response, CEO Nader Pourhassan has adopted a "catch me if you can" type of strategy. In other words, CytoDyn simply moved outside of the FDA's jurisdiction and began commercializing the drug in countries like the Philippines.

It's perplexing as to why the company would risk its relationship with the FDA like this. Aside from the COVID-19 indication, leronlimab is also under investigation for the treatment of HIV. In one study, leronlimab reduced viral load to negligible levels in 83% of patients with HIV.

I wouldn't be surprised if the rivalry between Pourhassan and the FDA has gone down to the personal level. Last July, the FDA rejected CytoDyn's Biologic License Application (BLA) filing for leronlimab's approval for treating HIV. But the agency did not ask for another clinical trial; it just wanted additional information about the drug and a meeting with company management. CytoDyn has just begun the process to resubmit its BLA on July 1, almost a year later.

At the end of the day, biotechs with sketchy science and management woes shouldn't be trading at a $1 billion market cap. Take note that CytoDyn has less than $150 million in total assets, leaving shareholders with little recourse in case of further blunders.

Northwest Biotherapeutics (NWBO -0.79%) is a company that closely mirrors Cel-Sci in terms of both its science and stock price. Its management is also even more "audacious" than that of the previous companies.

The company's flagship candidate is an immunotherapy known as DCVax-L, which is under investigation for the treatment of glioblastoma multiforme, the most deadly form of brain cancer. The phase 3 study has been going on since December 2006 (almost 15 years now). It was originally a phase 2 study, but the company "phase-shifted" it to 3, citing difficulty in finding patients who are comfortable taking a placebo for the deadly illness.

The study had numerous red flags from the start. Northwest was supposed to conduct two interim analyses of the trial data starting in December 2013. Yes, you read that right, December of 2013. By August 2014, however, the company had released a statement claiming that "no interim analysis of efficacy in the Phase III trial [had] been done." What's more, the FDA halted the DCVax-L clinical trial in August 2015 before lifting it two years later. To this day, Northwest's management has never explained the reasons behind the trial halt.

The company did eventually perform the interim analyses in 2017 and 2018, but released the results unblinded. When it comes to deadly diseases with significant unmet needs, clinical trials can be stopped early if the experimental drug meets the primary endpoint for ethical reasons. That did not happen with DCVax-L on both occasions.

Last October, Northwest finally announced that the trial was coming to its end and that data was to be sent for statistical analysis. It's been more than nine months since the announcement, and no news. But, again, from an ethical endpoint, if DCVax-L was working, it doesn't make sense that Northwest wouldn't release top-line data and rush the drug to approval to save lives.

Shareholders should be expecting a lot of pain ahead, as the company inexplicably has a market cap of $1.27 billion -- with an unpromising candidate and less than $35 million in total assets. All of this makes Northwest's fate look eerily similar to that of Cel-Sci -- and a stock to stay away from for good.

What's Behind This Wild-Card Coronavirus Stock?