Please ensure Javascript is enabled for purposes of website accessibility
Log In Help Join The Motley Fool
Free Article Join Over 1 Million Premium Members And Get More In-Depth Stock Guidance and Research
By Anthony Di Pizio - Jul 8, 2021 at 7:10AM

In an unlikely collaboration, C3ai is bringing artificial intelligence to an industry that is challenged on multiple fronts.

Enterprise artificial intelligence (AI) is an emerging industry. Offering software-as-a-service (SaaS) is now incredibly common among technology companies, but C3.ai (AI 2.30%) has blazed a new trail by providing its customers with foundational AI tools on a subscription basis.

With 4.8 million artificial intelligence models delivering 1.5 billion predictions per day, it's the biggest player in what is still a small game. However, its impressive customer list suggests the company is punching well above its weight. C3.ai serves dozens of industries, but oil and gas is one of the most notable -- and a collaborative effort with Baker Hughes (BKR 1.48%) might be a looking glass into what this company is really capable of. 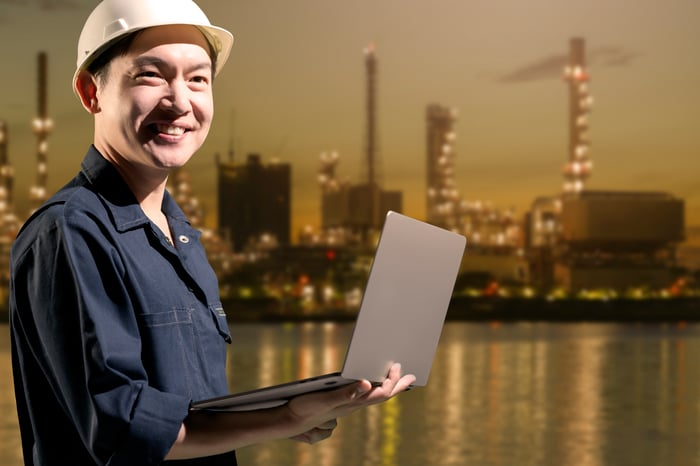 In a world where many investors are shunning industries known to cause social or environmental harm, it's not surprising that oil and gas companies have fallen out of favor. However, C3.ai has made significant inroads into some of the titans of that sector, in a somewhat unusual move for a modern, exciting technology upstart. In fact, oil and gas now represents 35% of the company's customer base.

It began in 2019, when Baker Hughes, an oil services company, took a minority stake in C3.ai and collaborated to deliver BHC3.ai, a full suite of AI applications targeted directly at the oil and gas industry. Fossil fuel exploration and extraction operations are enormous in scale, and produce large amounts of data that can be leveraged to deliver safer, more efficient projects.

One of the key goals of the platform is early failure detection -- analyzing mammoth amounts of data to predict potential equipment faults, letting operators know when they need attention. Not only does this save money, but it could be a revolutionary tool in preventing the environmental catastrophes that have plagued the industry in the past. Right now, the BHC3.ai suite is making 175 million predictions per day, across 24 Fortune 500 oil and gas organizations.

Building sustainable operations isn't easy in the business of fossil fuels, but some BHC3 applications use data to ensure carbon emission reduction targets are being met. Also, they constantly monitor processes and equipment to detect anomalies -- instances where performance might be suboptimal, resulting in more pollution. They might be small victories, but they're made possible by innovations from C3.ai.

C3.ai has continued to deliver stronger financial performance, with growing revenues and narrowing losses. It derives revenue from two main sources: subscriptions and professional services, with the former making up about 79% of the total.

In the most recent quarter (fiscal fourth quarter), the company grew revenues by almost 26% year over year, but more impressively it managed to keep operating expense growth to just 3.4%. The result was a much narrower net loss of $24 million, compared to $30 million in the same quarter last year.

If the company continues to grow revenues at an accelerated pace versus operating expenses, it will gradually move closer to profitability. That's evident in the reduction in full-year net losses.

Operationally, current applications in production for customers is at a record high of 91, and represents 35% growth year over year. This could be a useful indicator when assessing potential future revenues, and company projections suggest up to $247 million in the current fiscal year 2022. If it delivers, the revenue growth rate would climb to 35%, more than double the previous 16.9%.

Royal Dutch Shell is one of the oil giants C3.ai serves, and the pair just announced an expanded partnership for the next five years, aimed at accelerating the deployment of AI solutions across Shell's global assets.

But C3.ai is about more than just energy. It recently expanded its footprint in financial services too, growing its relationship with financial technology leader FIS Global to drive credit intelligence. This is on top of the work it has already done for the compliance part of that business, and is just one example among 89 total customers in dozens of different industries (which, by the way, is up from 49 customers just a year ago).

Ultimately, C3.ai has a leadership position in an early but fast-growing sector. By serving large corporations, it improves its chances of success in the future, as making significant technological changes takes time -- and companies of that size tend to get entrenched. Investors should keep an eye on whether the company delivers on its revenue projections this year, and if it manages to inch even closer to profitability.

Missed Out on Nvidia? 3 Artificial Intelligence Stocks to Buy Now

Should You Buy the Plunge on C3.ai?