Please ensure Javascript is enabled for purposes of website accessibility
Log In Help Join The Motley Fool
Free Article Join Over 1 Million Premium Members And Get More In-Depth Stock Guidance and Research
By Kody Kester - Jul 8, 2021 at 6:31AM

Investors were encouraged by a recent award the company received in the effort to diagnose and treat sepsis more rapidly.

Shares of in vitro diagnostics company Accelerate Diagnostics (AXDX 9.23%) were up 6% in June, outpacing the S&P 500's 2% gain. The jump occurred after the company announced on June 8 that nonprofit global partnership Combating Antibiotic-Resistant Bacteria-X (CARB-X) had awarded it $578,000 to develop new optical imaging technology aimed at diagnosing or evaluating the risk of sepsis. The agreement included the potential for up to $2.1 million in additional funds from CARB-X, if the project meets specific milestones. 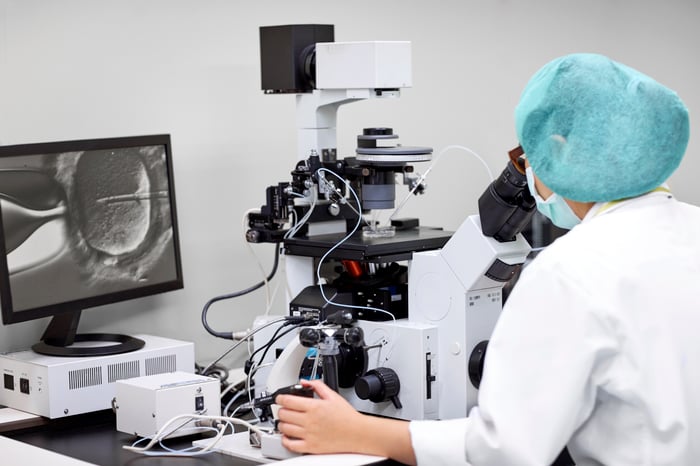 Sepsis is a potentially fatal response from the body to an infection, and 1.7 million Americans develop it each year. Obviously, it's of utmost importance for physicians to be able to rapidly diagnose and properly treat sepsis for the best health outcomes.

Currently, sepsis is responsible for roughly 270,000 American deaths each year, and the burden to the healthcare system is approximately $62 billion annually. For Accelerate Diagnostics, a company with a stated mission to "build new technology and tests that accelerate lab results and drive better clinical outcomes," the announcement from CARB-X is a vote of confidence. The organization clearly sees Accelerate as capable of a potentially major breakthrough in more efficiently diagnosing and treating the serious medical condition that is sepsis.

Whether Accelerate Diagnostics ultimately meets the milestones necessary to collect the additional $2.1 million in funds from CARB-X or revolutionizes the early diagnosis and treatment of sepsis remains to be seen, but this serves as another opportunity for the company to establish itself as a major player in the in vitro diagnostics industry, and that possibility appears to have been the catalyst for its robust stock performance in June.

While CARB-X doesn't disclose in its press release the specific milestones Accelerate Diagnostics needs to reach to receive the additional $2.1 million in funds for the development of its new optical imaging technology, it's worth noting that according to Grand View Research, the sepsis diagnostics industry is forecasted to grow at a robust 9.5% annual rate from net revenues of $628 million in 2020 to $1.2 billion by 2027.

Capturing a manageable slice of the anticipated 2027 market, such as 5% in a fragmented market (versus 2% in 2020), would help Accelerate Diagnostics' net sales surge from $11 million last year to $60 million in 2025.

Although this may seem like a particularly ambitious task, it's worth noting that Accelerate Diagnostics only received approval from the FDA in February 2017 to market its Accelerate Pheno system and Accelerate PhenoTest BC kits. These kits are aimed at providing faster testing to determine whether antibiotics are appropriate to treat an infection, limiting the probability of patients developing sepsis in the process by dramatically reducing unnecessary antibiotic prescriptions.

Accelerate Diagnostics is worth a look at the current price for the more risk-tolerant healthcare investor who believes the company's momentum within the sepsis diagnostics market will continue as more physicians realize the benefits of the Accelerate Pheno system to their patients, cutting unneeded antibiotic prescriptions and combating the major issue of antibiotic resistance, which too often leads to sepsis and unfavorable health outcomes.

Kody Kester has no position in any of the stocks mentioned.