Please ensure Javascript is enabled for purposes of website accessibility
Log In Help Join The Motley Fool
Free Article Join Over 1 Million Premium Members And Get More In-Depth Stock Guidance and Research
By Ryan Henderson - Jul 9, 2021 at 7:33AM

Despite a stock price that is still down from its 2013 IPO price, this mid-cap grocer looks poised for a bright future.

While there are plenty of ways to make money in the stock market, one of the best ways to generate significant returns is to buy undervalued, resilient businesses with long runways for growth and reinvestment. And Sprouts Farmers Market (SFM -1.78%) is a company that appears to check those boxes.

At a roughly $3 billion market cap, Sprouts Farmers Market looks to have a future that's quite bright. Here's why.

Unlike many traditional grocery chains, Sprouts is hyper-focused on delivering fresh groceries and dietary-specific items to what the company calls "health enthusiasts." While that target audience might sound a bit smaller than the more standard grocery shoppers, the health and wellness food market is expected to grow at an 8% compounded annual growth rate over the next three years -- much faster than traditional grocery. 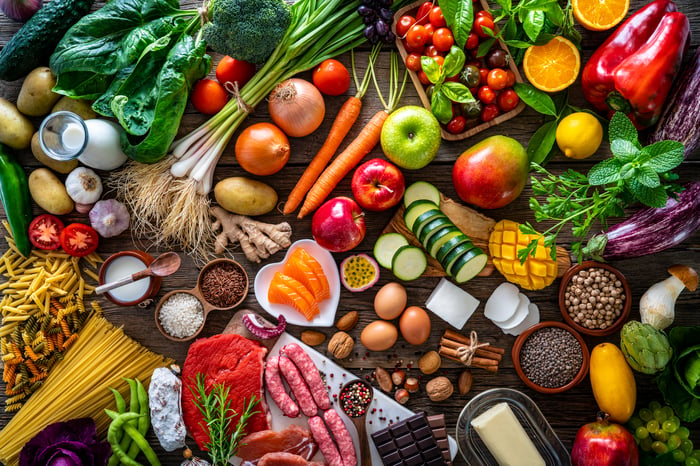 One way Sprouts is able to offer a unique experience to its customers is by differentiating its store layout. Every location follows a similar design, with produce positioned at the center of each store and low displays throughout the building. This makes shopping easier thanks to less meandering among tall aisles, and it even helps invoke the farmers' market experience that the store name implies.

With these low displays and uniform layouts across various locations, customers are able to get in and out of the store faster, which in turn reduces Sprouts' required store capacity. This is why its stores average between 28,000 and 30,000 square feet, with its even newer store formats ranging between 21,000 and 25,000 square feet. Compare that to other retail chains like Walmart (WMT 0.80%), which averages roughly 148,000 square feet in its U.S. stores. Sprouts generates roughly 20%-30% more sales per square foot than Walmart -- a testament to the lean operation that Sprouts is running.

Sprouts has room for reinvestment

According to the company's most recent quarterly report, Sprouts currently has a total store count of 362 across 23 states -- 12% more than the same period two years ago. But while Sprouts has intentionally slowed its expansion recently, it has been preparing its balance sheet to hit the accelerator.

In 2020, Sprouts generated nearly $500 million in operating cash flow, which helped the company reduce its long-term debt by more than 50% while simultaneously doubling its cash balance. With Sprouts now in a more favorable financial position, management has stated that it plans to expand the number of Sprouts stores by more than 10% a year starting in 2022.

By coupling 10% annual store count growth with low to mid-single-digit percentage comp-store sales growth, which Sprouts has been able to generate since the new management team stepped in in 2019, Sprouts should be able to comfortably grow revenue by double-digit percentages for the foreseeable future.

However, the chain can't just simply start adding stores at will. In order to increase its store count in an intelligent manner, management wants to have a distribution center within 250 miles of every Sprouts location to help sustain the company's level of quality and freshness. This is why Sprouts just added its sixth distribution center during the quarter in Aurora, Colorado, and plans to add another in Florida during the coming quarter. Both of these distribution centers should help the company fuel further store expansion in the surrounding areas, while also helping boost operating margins at those respective stores thanks to reduced shipping times.

Sprouts by the numbers

While the opportunity for Sprouts to grow looks appealing in its own right, the stock itself looks even more attractive.

Despite trading at a market cap of just under $3 billion, the company generated $322.4 million in operating cash flow over the last 12 months. And that number was even bogged down due to voluntarily building up inventory and paying out bonuses for the company's great performance in 2020. This puts Sprouts' multiple of price to trailing-12-month operating cash flow at just under 10 times -- well below the market average.

But investors aren't the only group that seems to think the stock is cheap -- management does, too. During the first quarter, the board of directors approved a $300 million share repurchase program, which would reduce the company's share count by 10% if it's executed at the current price. A buyback program of this size should be seen as a huge vote of confidence for shareholders.

As mentioned earlier, by coupling a resilient business with an attractive reinvestment runway and favorable valuation, investors tend to find strong returns. And that's just what Sprouts Farmers Market provides.

This Grocery Store Stock Is Crushing It