Shares of semiconductor manufacturing equipment supplier Lam Research (NASDAQ:LRCX) rose 37.8% in the first half of 2021, according to data from S&P Global Market Intelligence. The semiconductor manufacturing equipment industry has consolidated over the past couple of decades as cyclicality took its toll, leaving only a few strong companies with the ability to make these advanced machines -- Lam being one of them.

Fortunately for those remaining companies, it appears as if we are in for a supercycle in semiconductors, as the growth trends in artificial intelligence, 5G communications, and more intelligent connected devices are all taking off at once. And all of these trends were only accelerated by the pandemic.

Even though Lam Research and peers had already put in strong performances in 2020, especially after the development of effective COVID-19 vaccines, the entire sector received an added boost in 2021. Accelerated digitization trends, which emerged last year after a cautious pullback due to the pandemic, left leading semiconductor foundries and also entire countries looking to write massive checks to build out semiconductor manufacturing capacity.

How big are the checks we're talking about? Well, current foundry leader Taiwan Semiconductor Manufacturing announced plans for a $100 billion, three-year spending binge in order to catch up to surging demand and cement its lead as the world's most advanced foundry. Rivals Samsung and SK Hynix announced participation in Korea's 10-year $450 billion plan to catch up to Taiwan Semiconductor in terms of logic chip manufacturing, even though Korea is already a leader in memory chips. And U.S.-based Intel, which got a new CEO in Pat Gelsinger early in 2021, unveiled its own plan to become a foundry for other companies' chips, announcing a $20 billion plan to build new foundries in Arizona over the next couple of years.

Meanwhile, the U.S. Senate just passed the Endless Frontier Act, which would appropriate $52 billion to reinvigorate semiconductor manufacturing domestically, after chip manufacturing was largely offshored to Asia in recent decades. The House still needs to pass it, and other budget considerations must be made, but it appears that the supply-chain issues the economy is experiencing as the U.S. attempts to emerge from the pandemic have awoken lawmakers on Capitol Hill to the risk of not having enough semiconductor manufacturing capacity within the nation's borders.

A fair slice of those hundreds of billions of dollars set to be spent will go to semiconductor manufacturing equipment makers like Lam. And it delivered booming financial results last quarter with 54% revenue growth and 90% earnings growth. No wonder its stock has continued to rise. 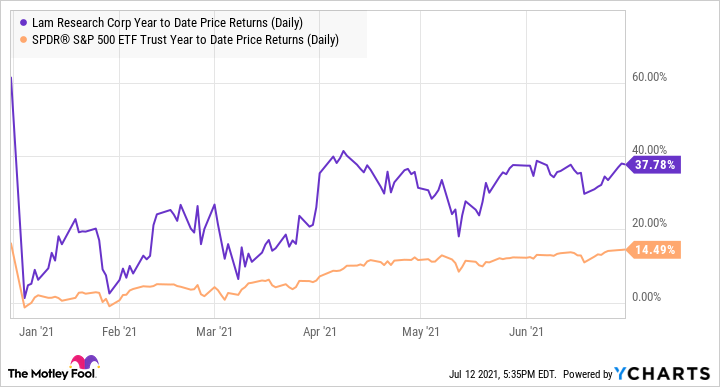 Though both the first half of 2021 and the past 12 months have been terrific for Lam Research, investors can still buy its stock for just 19 times forward earnings estimates. Investors may have been conditioned to expect a decline in earnings at some point, based on historical cycles.

And yet, despite some cyclicality, it appears Lam's results are much more resilient than they were a decade ago. That's due to the emergence of its services segment, which now produces about a third of its revenue, as well as its foundry customers' sustained and more consistent investments in capacity.

So despite the huge run it has had, I'd expect more good things from this dividend growth stock.