Please ensure Javascript is enabled for purposes of website accessibility
Log In Help Join The Motley Fool
Free Article Join Over 1 Million Premium Members And Get More In-Depth Stock Guidance and Research
By Billy Duberstein - Jul 11, 2021 at 6:45AM

This crucial segment of the economy has some of the best long-term growth prospects, with dividend sweeteners on top.

Sure, investors love their dividend stocks, but the biggest stock market gains are usually from growth stocks, which plow all of their earnings back into big market opportunities.

But who says you have to choose? One fascinating sector today is the semiconductor manufacturing sector, companies that can be thought of as the "picks and shovels" to the "gold rush" that is the competition for leading-edge chips.

Although semiconductors, and therefore their manufacturers, are thought of as cyclical companies, over the long term, their clear growth trend is up and to the right. In fact, the semiconductor sector as measured by the iShares Semiconductor ETF (SOXX 2.93%) is up almost 2.7 times that of the broader S&P 500 over the past 10 years: 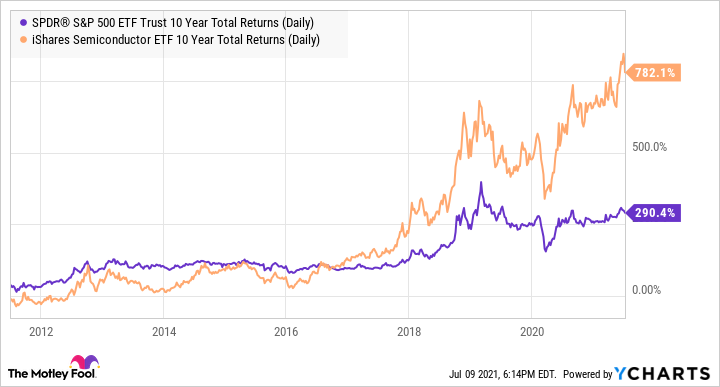 Despite the strong past performance, chip-reliant technologies such as artificial intelligence, 5G, and the Internet of Things aren't slowing down anytime soon. Yet semiconductor manufacturing is becoming more difficult and capital intensive, and the semi equipment sector has consolidated and matured.

That has led to fat profit margins for leading semi equipment companies and foundries -- enough to pay out nice dividends, while also seizing on growth opportunities at the same time. In that light, here are three top semicap equipment names with strong growth runways and dividends to boot.

Why not start with the biggest semiconductor manufacturing company in the world, in Taiwan Semiconductor Manufacturing (TSM 1.50%)? Taiwan Semi isn't an equipment manufacturer, but it is the world's leading pure-play foundry, where other companies turn to get their leading chips made. Thanks to its foundry-only business model, Taiwan Semi has recruited many of the top tech companies in the world to use TSM as their main foundry. Garnering expertise across many types of chips, from Apple's (AAPL 2.14%) M1 chip to Qualcomm's cellular modems to NVIDIA GPUs, Taiwan Semi has cemented itself as not only the largest but also the most capable foundry in the world.

Taiwan first surpassed Intel (INTC 1.46%) in the race to a 7nm chip several years ago, and has only cemented and extended that lead. After its 5nm chips first made it into the first 5G iPhone last year, Apple is already sampling Taiwan Semi's 3nm process, which should be ready some time in 2022, according to the Nikkei Asia.

Just how dominant is TSMC? Even Intel is now sampling TSM's 3nm process, even though Intel is competing with TSM in process technology and has ambitions to be a foundry for third parties itself. Intel just announced yet another delay to its 10nm Sapphire Rapids server chip, which will now be ready in early 2022 rather than 2021. Intel's 10nm process is roughly equivalent to Taiwan Semi's 7nm, but since TSM is already manufacturing 5nm and will soon have 3nm in production, Intel is falling further behind. So even Intel will probably be using TSM's services as it looks to claw back lost market share against Advanced Micro Devices, a TSM client, while it aims to catch up with its own capabilities.

While others like Intel are spending big in an attempt to catch-up, TSM recently announced its own $100 billion three-year spending plan to cement its lead and meet soaring demand for leading-edge chips. For perspective, TSM spent $17.2 billion on capital expenditures last year, so it's essentially doubling that figure over the next three years. With that much spending, investors can be pretty confident growth will follow. Meanwhile, TSM's 1.5% dividend should follow on that long-term growth path along with revenue and profits.

Filling up Taiwan Semi's foundries is equipment from Lam Research (LRCX 4.25%), one of just a handful of front-end semiconductor equipment manufacturers with technological capabilities to meet the industry's most exacting demands. Lam's expertise is in etch and deposition machines, serving both the logic and memory sub-sectors.

Of particular note, Lam is a leader in machines for 3D stacking, a technology process that began to be widely used in the NAND flash memory industry over the past five years. But Lam's equipment is important for logic production as well.

Furthermore, with a large share of the market, Lam has compiled tons of data, which it can then infuse in its latest machines, giving them more automated and self-maintenance capabilities, and giving Lam the ability to sell data-driven services to customers that help them minimize defects and improve yields. Basically, the more machines it sells, the more data Lam collects on highly precise, increasingly difficult manufacturing processes, which Lam can then fashion into even better machines and new services.

While machine sales can be a bit lumpy from quarter to quarter, services tend to steadily grow along with its installed base. Last quarter, services made up about one-third of Lam's revenue, which can go a long way toward smoothing out historical cyclicality.

With specialized and differentiated machines along with high-margin services, Lam is raking in huge profits, with 30% operating margins and a whopping 70% return on equity based on trailing 12-month results. While Lam's dividend only sits at around 0.85% today, that dividend is covered five times over by earnings, so it's near-certain to grow over the coming years. Lam is also returning the rest of its earnings in the form of share repurchases, for a total shareholder yield around 3.2% at today's stock price.

Moore's Law, which is the principle that semiconductors double the amount of transistors they can fit onto a die every one to two years, is slowing down, meaning advances in front-end semiconductor processes is also decelerating. That leaves back-end equipment to pick up the slack, connecting advanced chips, accelerators, and memory together in more energy-efficient packages. Advanced packaging and assembly is set to become much more important and capital-intensive in the age of 5G, the Internet of Things, and AI -- and that spells good things for Kulicke & Soffa.

Furthermore, Kulcike & Soffa has also developed machines for mini and microLED displays, a new type of display technology that should displace traditional OLED and LCD screens, at least to some extent. Apple's new iPad Pro uses miniLED display technology, and other screen-based products like TVs and even phones could adopt miniLED in the future. K&S management predicts a whopping 200% annual growth rate in miniLED revenues through 2025. While that is off a small base, in the coming years, miniLED revenues could become a material new segment at K&S.

While Kulicke & Soffa's stock has had a great year, up about 60%, it's actually down about 16% from all-time highs. It's also the cheapest of the three stocks here, at just 11.5 times 2021 estimated earnings. Like Lam, Kulicke & Soffa pays a growing dividend, which yields 1.1% today, but that was just raised by 16.7% in December and should continue into the future. Also like Lam, K&S devotes even more of its capital return to share repurchases, and has lowered its share count by about 23% since 2015.

In the tech world, software names, FAANG names, and chip designers tend to get more attention in the financial media, and tend to be bid up to pretty high multiples. Yet investors shouldn't overlook the less-glamorous "picks and shovels" equipment stocks that make these in-fashion tech sectors run. If you can stomach some cyclicality and volatility, semi-cap equipment names provide investors with some of the best combinations of dividends and long-term growth prospects today.