When you're evaluating two companies that will compete for the same target market, it's a bit like betting on a boxing match. By judging what each business is capable of before the match starts, keen investors can calculate the odds and pick a profitable bet. Of course, when we're looking at a pair of biotech stocks, the competition will end up being significantly slower than boxing.

In this showdown, the arena is the market for Alzheimer's disease therapeutics, and there are two noteworthy contenders. In one corner, there's the reigning champion, Biogen (NASDAQ:BIIB), the maker of Aduhelm, an Alzheimer's drug which regulators recently approved for sale, a move that was met with great controversy including a Congressional investigation. And in the other corner, there's the scrappy Annovis Bio (NYSEMKT:ANVS), a significantly smaller company that's working on an Alzheimer's therapy which could be significantly more effective than Aduhelm. There's an argument in favor of both stocks, but the most important thing for investors is that the bout has already begun. 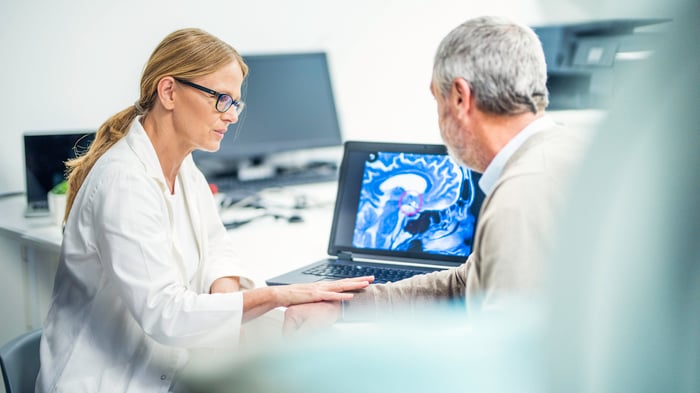 With its stock still sizzling from the Aduhelm approval, Biogen is positioned to capture the entire Alzheimer's market for itself, as there are no competing drugs. Right now, Biogen's trailing revenue is $12.6 billion. The company estimates that up to 2 million patients will be eligible for treatment with Adulhelm in the U.S., eventually making several billions of dollars per year in revenue -- a massive contribution to its already-profitable portfolio. Barring unforeseen circumstances, revenue should start to ramp up aggressively in 2022.

But there are issues with Aduhelm, like the cost of around $56,000 per year. And its efficacy is disputed, even by some of the regulators involved in the approval process at the Food and Drug Administration (FDA). While few deny that Aduhelm works at clearing beta amyloid, a protein associated with the disease, many commentators have pointed out that clearing beta amyloid doesn't necessarily lead to better cognitive functioning for Alzheimer's patients. So, Biogen's future sales aren't 100% guaranteed.

Alzheimer's medicine aside, Biogen has several other drugs approved for sale, and it also has a rich pipeline filled with other neurology candidates in various stages of the clinical trials process. Even if revenue from Aduhelm isn't all it's cracked up to be, the company will be able to recover.

Annovis may succeed where Biogen is struggling

Unlike Biogen, Annovis doesn't have any products on the market yet, so it isn't profitable and it doesn't have any recurring revenue. But, that just means investors who purchase it now can look forward to the chance of it exploding in value if it does eventually move a drug to the market successfully.

So far, it looks like Annovis is on the right track in that department. ANVS401 is Annovis' flagship project, and it could be effective for Alzheimer's disease as well as Parkinson's disease, both of which are being investigated in phase 2 clinical trials. Critically, ANVS401 can do something that Aduhelm can't: improve cognition in patients with Alzheimer's. That means it'll easily outcompete Aduhelm for market share if it gets approved, provided that early results remain true throughout the rest of the clinical trials process.

Until then, however, investors will be relying on the company's clinical trial results to catalyze increases in the stock price. So far, that's led the stock to grow by more than 1,830% this year. 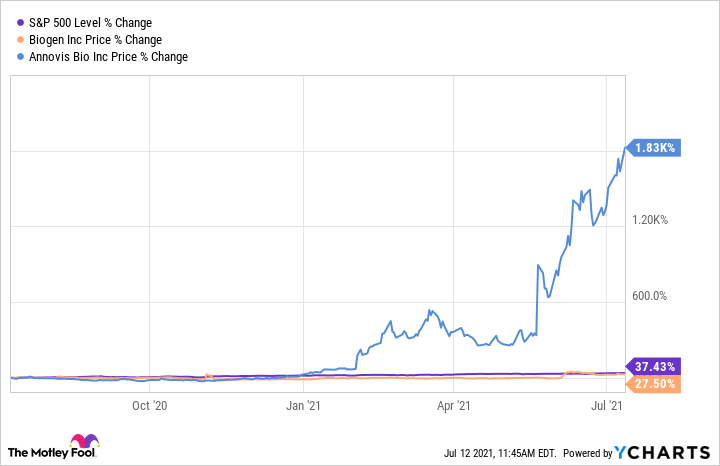 Don't bet on the underdog just yet

At the moment, my hunch is that Biogen is the better biotech stock, though further gyrations in the Aduhelm saga may change my opinion in the near future.

Aduhelm will probably make billions for Biogen, but making money on the stock is very far from a slam dunk. Much of the drug's future revenue is already priced into Biogen's current valuation. And, the ongoing scandal with the FDA isn't doing the stock any favors, nor is there much that management can do to move the process along to a favorable conclusion. Plus, it's entirely possible that revenue from Aduhelm will be underwhelming as a result of widespread skepticism about its efficacy. So, investing in Biogen right now is riskier than it may seem at first glance.

Nonetheless, it's still a much safer bet to invest in a profitable company that has several different sources of revenue than it is to invest in an unproven upstart like Annovis. Despite its promising combination of several different approaches to treating Alzheimer's, Annovis is still a long shot, and its stock isn't particularly cheap at the moment. Setbacks in the clinic or difficulties with regulators could devastate its value even more than similar events might harm Biogen.

In closing, it might be wise to hold off on buying either of these two stocks until there's a bit more clarity about Aduhelm. If you're still eager to invest in at least one of the pair in the meantime, Biogen is the preferable option.