Please ensure Javascript is enabled for purposes of website accessibility
Log In Help Join The Motley Fool
Free Article Join Over 1 Million Premium Members And Get More In-Depth Stock Guidance and Research
By Jeremy Bowman - Jul 17, 2021 at 8:30AM

Ticket sales distribution for the latest Marvel blockbuster shows that streaming is the future of cinema.

Movies are back. Er, sort of.

Disney's (DIS -0.90%) Black Widow set a new pandemic-era record, bringing in $80 million at the domestic box office on its opening weekend. While that might sound like good news for AMC Entertainment (AMC -6.30%) and other movie theater companies, there's a catch.

Disney also took home more than $60 million on its streaming service Disney+, selling the movie at a premium of $30 a pop. Though box office receipts were larger than the streaming sales, Disney gets to keep all of its streaming sales whereas studios generally split the box office haul 60/40 with exhibitors on blockbuster releases (the split is 50/50 for average releases). In other words, Disney only got $48 million over the weekend from domestic theaters, less than the $60 million from Disney+. That's a problem for AMC. 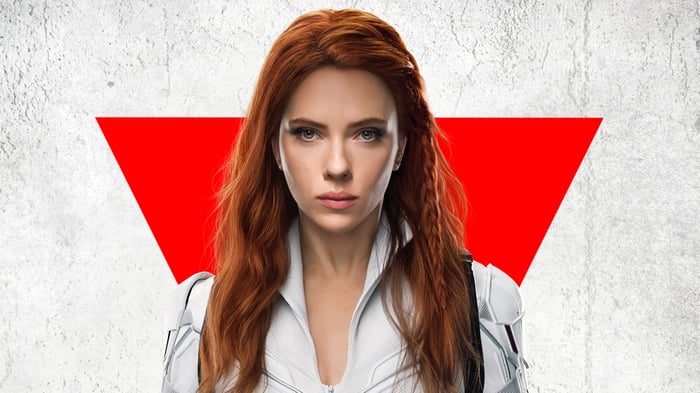 That prediction has been remarkably prescient, especially as streaming services have proliferated over the last two years, but linear TV isn't the only thing being disrupted by streaming. Hastings could have said the same thing about movie theaters themselves. After all, streaming isn't just competing against cable but also the experience of going out to see movies rather than watching them at home. After the pandemic, the supremacy of streaming has become clear.

Once upon a time, people used to talk about what movies they'd seen in the theater as fodder for entertainment conversation. Now, it's much more common to discuss shows you're streaming, a sign of the greater cultural relevance of streaming. Movie theater attendance in the U.S. peaked in 2002, even though the population has grown substantially since then, and streaming options continue to get better, especially with the wave of new services. The movie theater experience, meanwhile, is essentially unchanged from a generation ago.

Pre-pandemic, Hollywood studios like Disney respected the windowing protocol, meaning they would wait a certain amount of time, often 75 days, before making a theatrical release available at home. Now, as the success of Black Widow shows, that divider is no longer available to protect theaters.

Disney will continue to release movies in theaters as long as audiences show up, but streaming is the future here and will gradually disrupt movie houses. It makes more economic sense for Disney to keep as much of the revenue that it can from its blockbusters, and it's also a crowd-pleaser for audiences that would rather watch at home or can't easily go to the theater. The streaming experience will also get better from here on with technology like Ultra HD and 4K TVs. Marvel movie buffs may also choose to invest in their own home theaters rather than shelling out at the mall, now that they know Disney plans to release these blockbusters simultaneously at home and in theaters.

How will this all play out?

The New York Times (NYT -1.20%) and its print operations offer a useful example here. News consumption has gradually shifted from print to digital channels over the last generation. However, most newspaper business models were slow to adapt to this, and the Times has only done so recently, establishing a paywall to build out its digital subscription business. In recent years, revenue has been mostly flat, but sales have shifted from print to digital. Print advertising, meanwhile -- once the biggest driver of its business model -- is drying up, declining from $441.6 million in 2015 to $163.8 million last year. Meanwhile, digital subscription revenue went from $198.9 million in 2015 to $598.3 million in 2020, making up for the loss of the print advertising business.

The balance of revenue in movies from theaters to streaming is set to experience a similar shift. It may not happen as fast as it has with The New York Times, but the movement is inevitable. The demand is there, the technology is there, and there's a clear economic benefit for studios to go direct to the consumers. Nearly every major service has tested doing so since the pandemic started.

In the spirit of Hastings' prediction for linear TV, I'll make a similar one for movie theaters. Over the next 20 years, you'll see streaming become a greater priority for Hollywood studios, while movie theaters will gradually get left behind.

For theater operators like AMC, counting on Hollywood blockbusters is no longer enough.