Please ensure Javascript is enabled for purposes of website accessibility
Log In Help Join The Motley Fool
Free Article Join Over 1 Million Premium Members And Get More In-Depth Stock Guidance and Research
By Zhiyuan Sun - Jul 19, 2021 at 9:46AM

This biotech underdog offers more than meets the eye.

Arrowhead Pharmaceuticals (ARWR 3.64%) is a development-stage biotech company focused on RNA interference (RNAi) therapeutics. The company has nine candidates in clinical trials, including three potential biologics developed jointly with Johnson & Johnson's Janssen subsidiary. The stock had more than doubled year over year to $90 apiece in Junebut fell nearly 30% off its highs after the company announced on July 6 that it was pausing a phase 1/2 clinical trial to study ARO-ENaC for the treatment of cystic fibrosis.

The pause came after a preliminary toxicology report revealed lung inflammation in rats after treatment. What's more, recent phase 1 interim data for another drug candidate, ARO-HIF2, to treat clear cell renal cell carcinoma failed to excite investors. The experimental biologic demonstrated a partial response (at least 30% reduction in tumor diameter) in just 1 out of 17 patients in the investigation.

Investing in emerging biotechs and their drug development is usually a high-risk, high-reward venture, so can you count on Arrowhead to succeed? 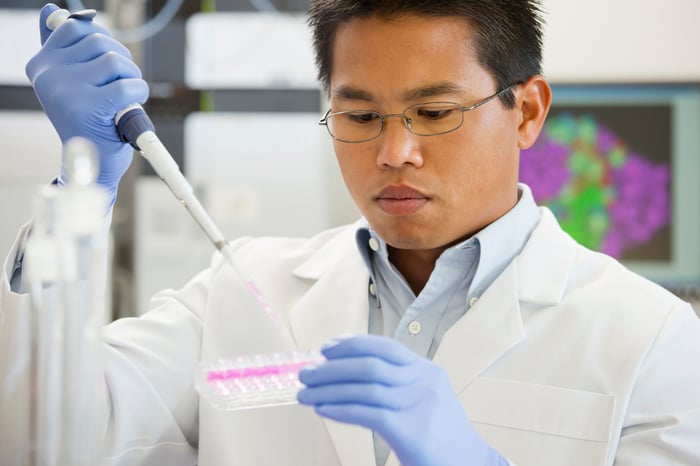 As mentioned previously, these aren't the only pipeline candidates for the $7 billion market cap company, so there's a lot of room to recover. Two of Arrowhead's most promising phase 2 candidates are ARO-AAT and JNJ-3989. Arrowhead is developing the former with Japan-based Takeda Pharmaceutical, while the latter is part of the Johnson & Johnson partnership.

In a five-patient study, ARO-AAT reduced the number of mutating proteins associated with Alpha-1 antitrypsin deficiency (AATD), a hereditary liver disease, by 77% to 97%. The disease is prevalent among 1 in every 2,500 individuals. Despite its rarity, however, Fortune Business Insights projects orphan drugs to treat the condition will reach $2 billion in sales by 2026.

Meanwhile, when given alongside standard-of care-treatments, JNJ-3989 significantly reduced viral biomarkers (such as HBV RNA) in patients with hepatitis B. There are already vaccines out for hepatitis B. However, they are ineffective for individuals who already have the disease, who number over 350 million people worldwide, including 1.2 million in the U.S. It is a market that analysts project will reach $35.63 billion by 2030, representing growth of 29.41% per year from today's levels.

But the path to success is often rugged. For example, results didn't look all that great for Arrowhead's ARO-HSD, which targets nonalcoholic steatohepatitis (NASH), a type of liver inflammation caused by the buildup of fat that affects 3% to 12% of U.S. adults. Currently, no medications exist that can reverse the effects of this fat buildup. In a phase 1 study, there were no significant changes in weight or lipid parameters among patients suspected of having NASH who received ARO-HSD.

Overall, Arrowhead's potential to advance JNJ-3989 through clinical trials is alone enough to justify its valuation. Keep in mind that the company is also well funded, with no debt and over $500 million in cash on its balance sheet. Investors should consider buying the biotech stock on the dip. The company is definitely at the forefront of developing functional RNAi therapeutics.