Please ensure Javascript is enabled for purposes of website accessibility
Log In Help Join The Motley Fool
Free Article Join Over 1 Million Premium Members And Get More In-Depth Stock Guidance and Research
By Neha Chamaria - Jul 19, 2021 at 11:09AM

After a heady run-up in the last month of 2020, shares of uranium mining giant Cameco (CCJ 0.47%) continued their momentum into 2021 and gained a whopping 43.1% in the first half of the year, according to data provided by S&P Global Market Intelligence.

A general sense of optimism in the uranium market and a new emerging trend in the industry that's helping support uranium prices were some of the biggest factors driving Cameco shares higher.

In early February, Bank of America suggested that the U.S. may not close aging nuclear plants before 2030 as it plans. As that could mean greater demand for the key nuclear fuel uranium, uranium stocks soared on the speculation, with Cameco shares gaining big given its leadership position in the industry. Days later, Cameco reported strong fourth-quarter numbers and decided to keep production suspended at its key mine, Cigar Lake. As Cigar Lake is the world's highest-producing uranium mine, Cameco's move was seen as an attempt to support uranium prices. 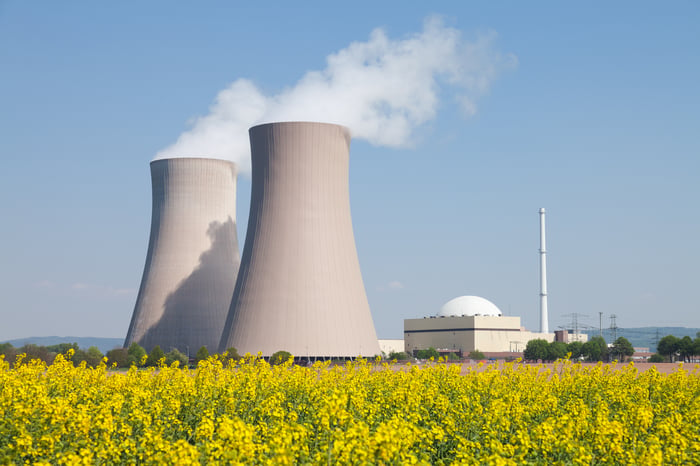 Cameco got another big boost when part of a drawn-out tax dispute with Canada's revenue agency was decided in its favor. The ruling lifted Cameco's hopes that pending disputes for years 2007 through 2014 could turn in its favor as well, which could mean a refund of the $785 million that the company has had to cough up so far.

Meanwhile, a new trend appeared to emerge in the industry, wherein uranium miners started to buy physical uranium from the spot market instead of mining it in anticipation of a recovery in uranium prices. The moves helped tighten supply and hold uranium prices up to some extent.

Cameco, in fact, confirmed market conditions were improving when it added nine million pounds worth of contracts during its first quarter, reported a backlog of nearly 60 million pounds, and said it is negotiating large contracts. Cameco's Q1 numbers impressed the market, as it narrowed its first-quarter net loss to $5 million from $19 million a year ago and ended the quarter with $1 billion in cash.

Even as Cameco tried to curtail supply to support uranium prices, there've been some positive developments on the macro front. The unprecedented winter storm in Texas that knocked off natural gas plants, for example, brought attention back to nuclear energy and spurred hopes that detractors might rethink nuclear energy's importance as a reliable, clean, and sustainable source of energy.

In short, hopes that nuclear energy, and therefore uranium, could see better days has driven uranium stocks higher. But Cameco and other miners still need higher uranium prices to keep the momentum going, and that's something investors may want to keep an eye on in Cameco's upcoming second-quarter earnings report later this month.