Buying and holding can be hard when stocks are swinging wildly from day to day. But research shows that trying to time the market is the most predictable way to underperform. Real wealth is built by buying companies and allowing them to compound earnings over time.

It's a lot easier when you buy companies that have a history of great performance and a clear path to years of profitable growth ahead. Veeva Systems (NYSE:VEEV), Repligen (NASDAQ:RGEN), and ResMed (NYSE:RMD) fit that description. Let's examine each and see why they're excellent choices to tuck away for the next decade. 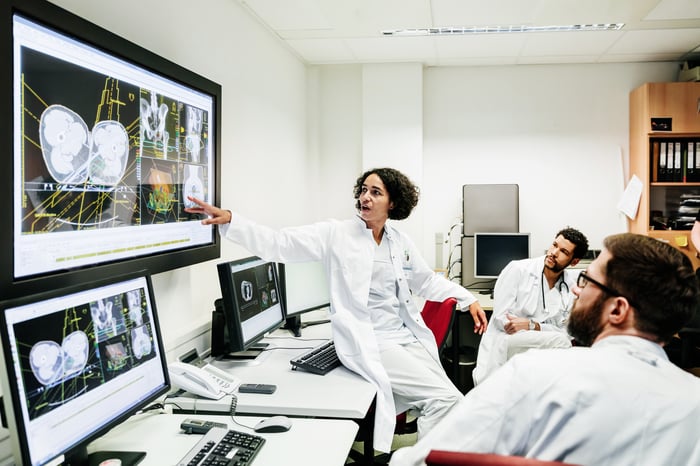 Veeva is a cloud-based software platform specifically designed to meet the challenges of the life sciences industry. In simple terms, it helps customers navigate the drug development and commercialization process more quickly.

The industry apparently needed the help. The number of customers has grown from 95 in 2012 to 993 as of January 2021. Revenue growth has exceeded 25% every year for the past decade, averaging 29% over the past three-year and five-year periods.

That growth is translating to profit. Operating income grew 36% and 37%, respectively, over those time frames.

The combination has turned Veeva into a free cash flow champion. It's converted between 32% and 40% of sales into free cash flow over the past four years. The company's been even better over the last 12 months. Only money minters like software-as-a-service (SaaS) titan Adobe are in the same league. 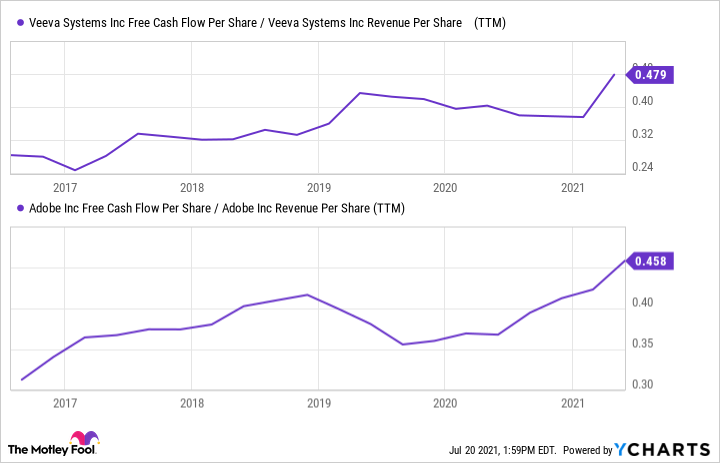 Drug companies are spending an increasing amount of money on research and development, and Veeva's products are gaining adoption in new industries like cosmetics and consumer packaged goods. As a result, the company's growth story is likely just getting started.

Repligen has taken advantage of the shift in drug development from chemical compounds to biologics -- drugs derived from living cells. The company develops and sells equipment and systems to improve the efficiency of manufacturing biologics.

The business is segmented into filtration, chromatography, analytics, and proteins. That portfolio was largely created through small acquisitions that management has used to create an end-to-end solution for its customers.

Those customers consist of major life sciences companies, contract manufacturers, biotech and pharmaceuticals, as well as diagnostics and laboratory businesses. The largest, MilliporeSigma, still represents 11% of Repligen's revenue, but the percentage has been shrinking each year.

The company's relationship with both MilliporeSigma and Cytiva -- a unit of Danaher that used to be GE Healthcare -- is somewhat odd. Those two large customers are also competitors. There's still plenty of room for Repligen to grow. Its annual sales are about 60 times less than Danaher's.

If competition is a problem, there has yet to be any indication. Since 2012, sales have grown at an annual pace of 24%. The growth has increased over the past few years, averaging almost 40% since 2017. With the focus on gene-based medicines, the demand for Repligen's products isn't likely to ebb anytime soon, thanks to the pandemic and CRISPR.

The few who have heard of ResMed mostly think of the company as a provider of machines that help those with sleep apnea breathe better at night. That's a gross simplification. The company also has cloud-based software connecting more than 15 million devices globally. Despite that scale, there's still an enormous untapped market for the company's respiratory devices and supporting software.

Sleep-disordered breathing -- the abnormal respiration during sleep -- remains a largely undiagnosed condition. Out of every 100 Americans, four are diagnosed and another 22 have the disorder without knowing it. That's especially dangerous, as it often coincides with risky conditions such as obesity, diabetes, and hypertension.

Management believes the global opportunity consists of nearly a billion people with mild sleep apnea and more than 400 million with a moderate form of the disorder. Add in the 380 million people worldwide who have chronic obstructive pulmonary disease (COPD), and it's clear ResMed has a gigantic untapped market. By itself, COPD is estimated to cost $50 billion annually in the U.S.

Perhaps the most exciting part of ResMed's business is the cloud-based software for out-patient care. Its single view of the patient across settings such as skilled nursing, home health, and senior living facilities will help health systems manage patients for better outcomes at lower costs. With the healthcare complex moving toward value-based care -- being paid based on good outcomes and low costs -- it could become the leading electronic health-record provider as a growing portion of traditional care moves outside the hospital.

The company has grown revenue about 10% annually over the last decade. The shift to software should facilitate continued growth at higher margins. That would translate to the bottom line. Perhaps that's why the price-to-sales ratio has steadily risen over the last few years from about 4 to 12, currently. 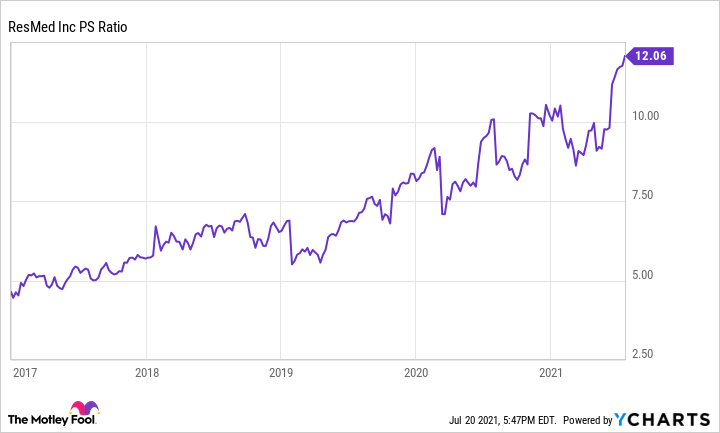 If management can find a way to bring treatment to a portion of the undiagnosed cases and continue its push into out-patient software, the rich valuation can easily be justified. Investors looking for a solid dividend-paying healthcare company to buy and hold for the next decade should consider adding ResMed to their portfolios.