Please ensure Javascript is enabled for purposes of website accessibility
Log In Help Join The Motley Fool
Free Article Join Over 1 Million Premium Members And Get More In-Depth Stock Guidance and Research
By Will Healy – Jul 22, 2021 at 9:25AM

The telecom equipment maker is drawing interest from the Reddit meme-stock crowd.

Amid drastic changes to its business, Nokia (NOK -0.23%) continues to attract investor attention. Once the leading maker of mobile phones, it has redefined itself as a telecom equipment stock in the 5G era. Moreover, it has recently drawn attention from traders on Reddit as a meme stock, in part due to its low per-share price.

Meme stocks do carry some potential for sharp upward moves that traders can capitalize on -- but can this telecom stock generate real wealth for long-term investors? 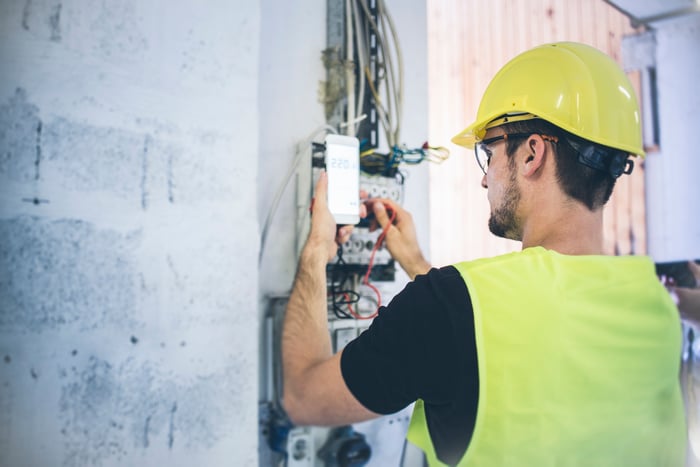 The current state of Nokia stock

Recently, Nokia stock surged higher after the company revealed it would raise guidance in the upcoming quarter. The announcement sent the stock price upward by 9% on July 13, and it has largely held onto those gains in the days since, closing Tuesday trading at $5.81 per share.

Moreover, the increased attention from traders in Reddit's WallStreetBets subreddit has fueled speculation. Some believe the company's July 29 earnings announcement, when management will reveal its new guidance, could spur the stock much higher. Still, despite the recent stock price increase, Nokia's market cap is down by about 4% over the last five years.

Nokia has traded much higher historically, reaching $62 per share at the height of the dot-com bubble in 2000. In addition, shares sold for as much as $42 when its cellphone business peaked in 2007. 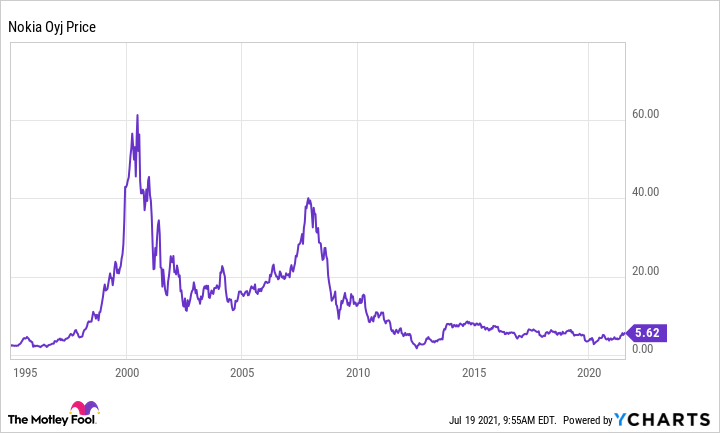 Nonetheless, in the age of smartphones, cellphones are no longer a priority for the company. Now, its mobile networks division makes radio access networks (RANs) and base stations that bolster private wireless networks. Also, as the name implies, its cloud network services division helps companies orient their telecom networks around the cloud.

However, its most vigorous growth is coming from its network infrastructure business. Nokia took over this business following its buyout of Alcatel-Lucent in 2016. It competes with companies such as Ericsson, Huawei, and Samsung to provide infrastructure to telecoms that are upgrading their abilities to provide 5G service.

Unfortunately, researchers from Gartner reported that several network operators had found Nokia's equipment underperformed that of its peers. Ryan Koontz of Rosenblatt Securities said in an interview that Ericsson holds a technical lead of six to 12 months over Nokia in hardware development.

This appears to be affecting crucial client relationships. Instead of choosing Nokia, Verizon awarded an equipment contract worth 7.9 trillion Korean won ($6.9 billion) to Samsung last fall. That's particularly devastating as Nokia's CEO referred to Verizon as a "top three customer" on the Q1 2021 earnings call.

Additionally, Nokia's financials have presented a mixed picture in recent quarters. In Q1 2021, revenue rose 3% year over year to 5.1 billion euros ($6 billion). However, if not for a 22% gain on the network infrastructure side, revenue would have fallen. Also, decreased operating costs helped Nokia generate a profit of 263 million euros ($311 million), a welcome development compared to its loss of 115 million euros ($136 million) in the prior-year quarter.

Other metrics suggest that the prospects for massive share price gains are limited. Nokia's price-to-sales ratio stands at about 1.2, a level that approximates the longer-term averages for its valuation.

Moreover, Nokia has about 5.6 billion shares outstanding. With so many shares available, gains become more difficult as it takes large purchases to move the stock price. In comparison, AMC Entertainment, which many shareholders slammed recently for its efforts to issue additional shares, has made about 502 million shares available.

This oversupply of shares points to a key difference with other low-priced stocks. Most companies trading in the $5 per share range are either small or mid-cap companies. Nokia has a market cap of about $32 billion -- well into large-cap territory. Consequently, if it returned to its all-time high in the $62 per share range, that would take its market cap to $350 billion.

Is Nokia a millionaire-maker?

In the end, Nokia is unlikely to turn small investors into millionaires. Admittedly, an upgrade to its guidance and the speculative interest of meme-stock traders could push its share price higher. However, anecdotal evidence suggests its network equipment is not meeting the standard set by its peers. Moreover, with its revenue flat, investors have less incentive to bid the stock price up.

Unless Nokia can start to match or beat its peers in the telecom equipment market in terms of quality, this stock could struggle to outperform the S&P 500, let alone create millionaires.