Please ensure Javascript is enabled for purposes of website accessibility
Log In Help Join The Motley Fool
Free Article Join Over 1 Million Premium Members And Get More In-Depth Stock Guidance and Research
By Dan Caplinger - Jul 22, 2021 at 10:35AM

Earnings season continues to pick up speed, and a couple of well-known stocks offered their latest look at their respective businesses. Domino's Pizza (DPZ 0.02%) and Union Pacific (UNP 1.33%) both saw their stock prices gain ground after releasing their reports. Below, we'll look more closely to see what the two companies said and what it means for their future.

Shares of Domino's Pizza jumped more than 10% Thursday morning. The pizza restaurant chain's second-quarter results were a lot better than many had expected even as the economy emerges from the pandemic and patrons start to return to dine-in restaurants versus relying on delivery. 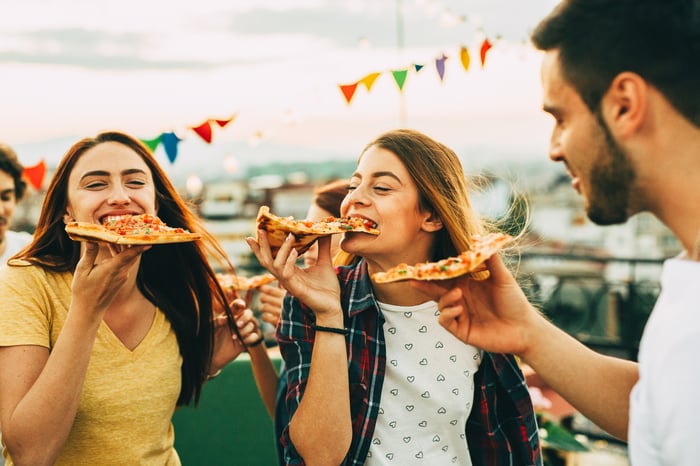 Domino's numbers were impressive. Global retail sales were up nearly 22% year over year, with same-store sales climbing 3.5% in the U.S. market and 13.9% internationally. Domino's opened more than 200 new locations internationally to go with 35 new stores in the U.S., and adjusted earnings of $3.12 per share came in 4% higher than year-ago levels.

Domino's also recommitted to returning capital to shareholders. The company approved a new $1 billion stock repurchase program, having used up its previous buyback. That supplements a modest dividend of $0.94 per share that works out to a yield of less than 1% on the stock.

Many investors had feared that people who were tired of pizza delivery might abandon Domino's, causing a pullback in sales. However, that wasn't the case, and Domino's now looks more optimistic than ever about its long-term growth prospects.

Meanwhile, shares of Union Pacific were up more than 2%. The railroad operator reported record earnings in the second quarter and had other good things to say about its business.

The extent of Union Pacific's rebound showed how extensive the damage from the pandemic was in the year-earlier period. Revenue jumped 30% on a 22% rise in shipment volume. Operating ratios improved by nearly 6 percentage points to 55.1%, and earnings of $2.72 per share soared more than 60% year over year.

Union Pacific saw strength just about across the board. Revenue from auto shipments more than doubled from year-ago levels, and intermodal shipments brought in 33% more in sales. Forest products, metals, and energy products also spurred a better top-line performance for the railroad.

Stock repurchases have also played a role in Union Pacific's share price, with the railroad having spent $2.7 billion buying back 12.2 million shares in the second quarter alone. Combined with a dividend yield of nearly 2%, Union Pacific remains dedicated to returning capital to shareholders as well.

Railroad stocks took a hit earlier this month on fears that the Biden administration would discourage consolidation and alliances in the transportation sector. However, that threat isn't stopping Union Pacific from putting up strong financial numbers, and investors like what they're seeing.

Domino's Stacks Up, Target Misses, and Winter Offically Gets the Blame for Everything