Reserve releases masked the fact that the bank's operating income rose sequentially in the second quarter.

U.S. Bancorp (USB), the country's fifth-largest bank by assets, followed up its strong first-quarter rebound with a strong second quarter. The $558-billion-asset bank generated $1.28 in diluted earnings per share in Q2, down nearly 12% from the first quarter, but more than triple its diluted earnings from the prior-year period.

The bank also generated a 1.44% return on average assets (ROAA), a measurement of how well management uses assets to generate earnings, and a nearly 21% return on tangible common equity (ROTCE), the technical rate of return the company made on its physical capital for the quarter. These are strong results, considering investors usually deem a 1% ROAA to be strong, as well as anything in the teens for ROTCE. And despite the sequential slide on the bottom line, U.S. Bancorp's second-quarter performance was actually an improvement over its first quarter.

For long-term investors, the earnings results in the first half of the year are back to the consistently strong earnings that U.S. Bancorp shareholders have become accustomed to, and that have given the stock its consistently high valuation. It's a good sign to see the bank's core earnings continue to recover. While loan growth is still lagging, fee income bounced back nicely and the bank continued to manage expenses well amid a challenging environment. Let's dig into the quarter.

The main reason U.S. Bancorp reported higher earnings in the first quarter is because the bank released more than $1 billion that it had stored away early in the pandemic to cover anticipated loan losses. In the second quarter, U.S. Bancorp only released $350 million from its reserves. This capital from reserves essentially goes back onto the income statement as profits. Not factoring in reserves, operating income (total revenue minus expenses) at the bank grew by nearly 15% in the second quarter from the first quarter.

The banking industry is still not seeing the loan growth it would like, and U.S. Bancorp is no exception. Average loan balances were flat quarter over quarter, but net interest income grew 2.4% from the first quarter of the year. A big reason for this was because the bank invested some of its excess liquidity in securities when the yield on 10-year Treasury bonds reached 1.75% earlier this year, a move that so far has paid off as the yield on 10-year Treasuries has plummeted down to roughly 1.3%, as of July 21. But there was some small growth in commercial and industrial loans, as well as in retail loans. 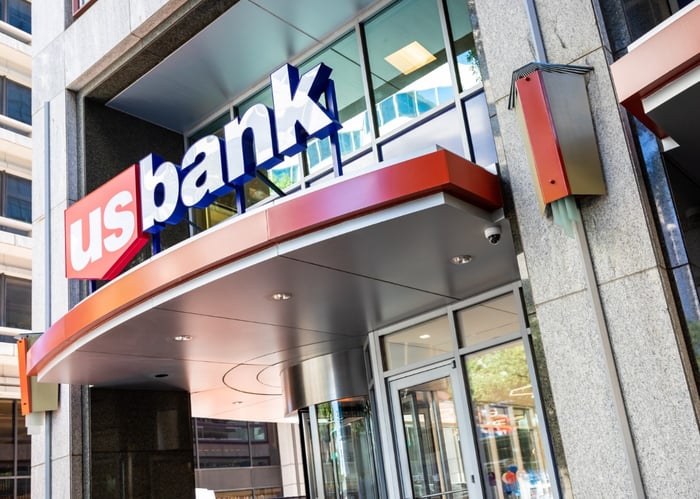 The main source of revenue growth in the quarter came from the bank's fee income business segments, which reported revenue that grew 10% from the first quarter of the year and was slightly up on a year-over-year basis. The main reason for this was a rebound in the bank's niche payments business, which more than offset a decline in mortgage banking revenue after a surge in 2020.

U.S. Bancorp's payments business includes consumer and business credit cards, stored-value cards, debit cards, corporate, government, and purchasing card services, consumer lines of credit, and merchant processing. It's one of the main competitive advantages for the bank. During the earlier phases of the pandemic, these businesses, which produce a good chunk of its overall profits, got hit hard because spending was relatively subdued. But as of late June, CEO Andrew Cecere said total sales volume in all of its payments businesses exceeded 2019 levels for the first time since the beginning of the pandemic, though some softness remains in certain travel and entertainment spending categories. Fee revenue in the payments business was $908 million (or nearly 16% of total revenue in the second quarter), which is up more than 16% from the first quarter and almost 40% higher year over year.

A good quarter of expense management

Expenses have been a big area of focus in the financial sector in the second quarter, with many large banks turning in elevated expenses as they try to strip away COVID-related expenses and get back to more normal expense run rates in the current low-interest rate and challenging revenue environment.

U.S. Bancorp basically kept expenses flat from the prior quarter, though they rose by roughly 2% from Q2 2020. That's good news because while expenses stayed flat on a quarter-over-quarter basis, revenue ticked up 5.7%, giving the bank some nice operating leverage, which is the difference between the growth rate of revenue and the growth rate of expenses. In the second quarter, U.S. Bancorp had 5.5% of operating leverage.

As one analyst pointed out on the bank's earnings call, after six years of negative operating leverage at the bank due to its ongoing investments in its business, the pandemic, and various other reasons, this was one of its best quarters by that metric in a while.CFO Terrence Dolan said that the bank plans to manage expenses flat going forward, despite the challenging revenue environment, and he anticipates more consistent positive operating leverage in a more normalized revenue environment.

Getting back to business as usual

This quarter was much more consistent with the type of earnings U.S. Bancorp normally reports. Revenue seems to be moving in the right direction. Although the bank is still looking for material loan growth, like the rest of the industry, its important payments business has bounced back, while other fee revenue streams performed nicely as well. The bank is also doing a good job of managing expenses as the economy transitions, and credit continues to look good.

Ultimately, I liked what I saw from U.S. Bancorp in the second quarter and believe it resulted in an improvement from the first quarter, despite the headline numbers.

This Warren Buffett Stock Is Starting to Look Cheap
357%