Please ensure Javascript is enabled for purposes of website accessibility
Log In Help Join The Motley Fool
Free Article Join Over 1 Million Premium Members And Get More In-Depth Stock Guidance and Research
By Keith Speights - Jul 22, 2021 at 10:51AM

The company reported disappointing results from a phase 2b clinical study.

Shares of Seres Therapeutics (MCRB 5.92%) were crashing 57.3% lower as of 11 a.m. EDT on Thursday. The steep decline came after the company announced top-line results from a phase 2b clinical study evaluating SER-287 in treating ulcerative colitis (UC).

With the biotech stock losing more than half of its value today, it's no surprise that Seres' clinical results weren't good. The company reported that the primary endpoint of improving clinical remission rates wasn't met. 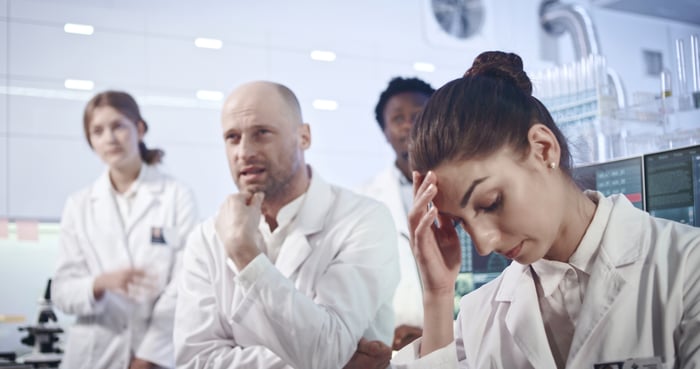 Seres CEO Eric Shaff acknowledged that "these outcomes were not what we, nor the UC community, were hoping for." Because of the poor results, the company is closing the open-label and maintenance parts of the phase 2b study.

The main thing to watch with Seres now is its anticipated regulatory filing for approval of SER-109 in treating recurrent Clostridioides difficile infection. The company recently signed a deal with Nestlé Health Science to co-market the drug pending approval.

Why Shares of Seres Therapeutics Are Up More Than 22% Wednesday