As the U.S. rolled out its coronavirus vaccination campaign, cases of COVID-19 plunged -- and Americans allowed themselves to imagine a return to normal sooner instead of later. But the pandemic has shown us in recent weeks that it's far from over.

Today, COVID cases are on the rise again. And the delta variant is leading the trend. That strain has become dominant in the U.S. -- and is sending many unvaccinated individuals to the hospital. In fact, officials recently said 97% of hospitalized patients are unvaccinated. But are today's authorized vaccines able to stop this highly contagious strain? Let's take a closer look. 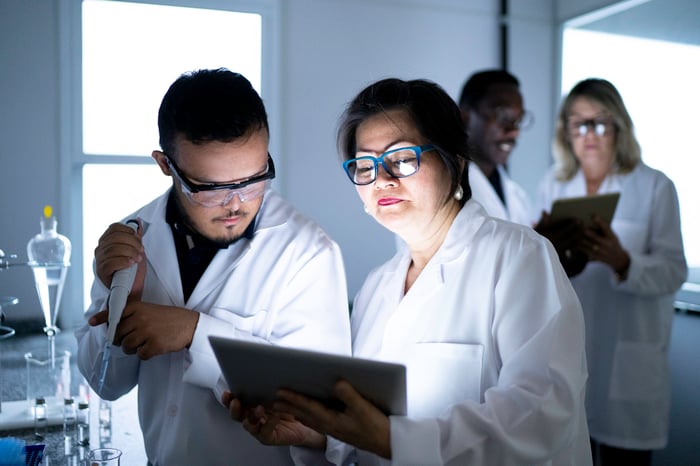 Moderna (NASDAQ:MRNA) tested its vaccine in vitro against several variants. The study covered the beta variant (originally found in South Africa), the delta and kappa variants (both originating in India), the eta (first found in Nigeria), and strains found in Angola and Uganda.

The company used serum samples from eight trial participants one week after their second vaccine dose. Tests showed the vaccine was effective against all of the variants.

Like Moderna's, Pfizer's (NYSE:PFE) performance declines slightly against newer variants compared to the original version of SARS-CoV-2. But, as with Moderna's, in vitro tests showed Pfizer's vaccine remains effective against delta and other variants.

We also have some real-world data on Pfizer, which is particularly useful. A study in the U.K. found the Pfizer vaccine to be 33% effective against symptomatic illness from the delta variant three weeks after the first dose, and 88% effective two weeks after the second dose. This research covered the period of April 5 through May 16.

More recent real-world data paints a darker picture. In Israel, the health ministry found that effectiveness in preventing symptomatic disease declined to 64% over the past month, as the delta variant has gained ground. The good news, however, is that efficacy at preventing serious cases and hospitalization remains high -- at 93%.

The big advantage of the Johnson & Johnson (NYSE:JNJ) vaccine is that it involves one shot. Many people opted for the J&J jab specifically for this reason -- even if its efficacy wasn't as high as that of vaccines from Moderna and Pfizer. J&J's trials showed 85% efficacy against severe disease. Moderna's and Pfizer's efficacy in that category tops 95%. Those vaccines involve two jabs, given about a month apart.

But a recent New York University study of the J&J vaccine indicated low neutralization capabilities. That suggests antibody levels in the vaccinated may not be high enough to fight off the delta variant. The researchers say people vaccinated with the J&J vaccine would benefit from an additional shot.

What do health experts say?

Earlier this month, the U.S. Food and Drug Administration and the Centers for Disease Control and Prevention said: "People who are fully vaccinated are protected from severe disease and death, including from the variants currently circulating in the country such as delta." (The joint statement referred to the Pfizer, Moderna, and Johnson & Johnson vaccines.)

The efficacy numbers we see above support this idea.

So far, Moderna, Pfizer, and Johnson & Johnson haven't stopped the spread of the novel coronavirus. And it's true that overall efficacy is lower against variants of concern. Ideally, the vaccines would prevent 100% of COVID cases -- no matter what the intensity or the variant.

But if we can't have that immediately, here's what's second-best: preventing severe cases. And here, all three vaccines are working at high levels.

So, investors in these coronavirus vaccine stocks don't have reason to worry about the companies' vaccine revenue prospects. In fact, the growth of variants of concern may spur governments to increase orders. If every resident of a country needed a booster, for example, that would lift order and revenue figures.

All of this is positive for these companies' earnings in the quarters to come -- and that's great news for shareholders who plan on holding on to Moderna, Pfizer, or J&J for the long term.