Shares of Agora (NASDAQ:API) were down as much as 25% on Friday after the Chinese Communist Party (CCP) announced new sanctions on technology companies in its home country. As of 1:39 p.m. EDT, Agora stock was down 22.2% on the day.

On Friday, news was circulated that the CCP was looking to heavily regulate the private education and tutoring industry. TAL Education Group (NYSE:TAL) and Gaotu Techedu (NYSE:GOTU), two stocks operating in this space, were down over 50% on the news. It was also reported by Bloomberg News that regulators are planning harsh punishments against ride-hailing company Didi Global (NYSE:DIDI) as well after it upset members of the CCP, which has supreme rule over companies operating in the country. The Bloomberg report stated that Didi Global could be forced to pay a fine even bigger than the $2.8 billion tech giant Alibaba (NYSE:BABA) had to pay last month. Agora won't be directly affected by these regulations, but it looks like investors were spooked by the news, which has caused a huge sell-off in Chinese listed stocks on Friday. 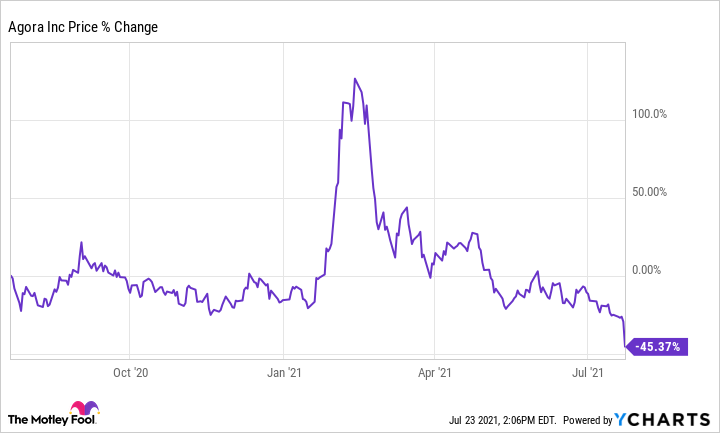 Agora stock is now down almost 50% this year. However, the company, which sells software to embed real-time communication tools into applications, still trades at an aggressive price-to-sales ratio (P/S) of 20.9. With the looming threat of regulation from the CCP, there's no reason for investors to take a risk investing in this stock, especially when you combine it with such a nosebleed valuation.