Chipotle (NYSE:CMG) recently reported earnings that soundly beat expectations. Earnings per share (EPS) came in at $7.46 for the fiscal 2021 second quarter when analysts on Wall Street were expecting earnings of $6.50.

The fast-casual restaurant chain is benefiting as the U.S. lifts many COVID restrictions. Chipotle pivoted quickly at the onset of the pandemic, emphasizing digital sales, and it is now supplementing its digital business with the return of customers to its dining rooms. The one-two punch allowed the company to surpass its previous peak of $2.5 million for average unit volumes (or AUV, the average annual sales per store). And thanks to other progress made during the pandemic, management is confident enough to set an even higher target for AUV going forward. 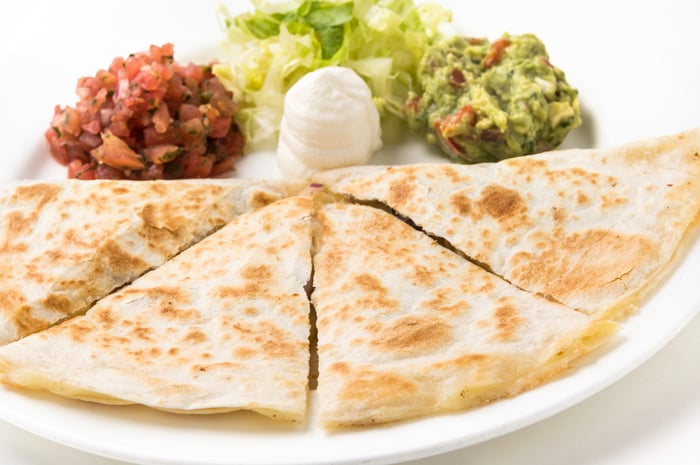 Chipotle thinks it can generate more sales per store

Chipotle moved the goalposts and set a new AUV target of $3 million. CEO Brian Niccol described his company's thinking during the earnings call:

So it's a nice achievement for the organization to have $2.5 million AUVs again. But more importantly, we have growth strategies that will take us to the next leg of our journey, $3 million AUVs, along with industry-leading returns on invested capital that improve as we continue to add Chipotlanes. Stronger restaurant-level economics combined with significant unit growth should allow us to optimize earnings power for many years to come.

The company has regained 70% of in-restaurant sales lost at the onset of the pandemic, and it also managed to retain roughly 80% of digital sales at the same time. This is a positive indication that growing dine-in visits are in addition to online orders rather than replacing them.

Moreover, in June, Chipotle instituted a 3.5% to 4% increase in menu prices. Management saw "little resistance" to the price increases among customers in its various channels, which could be another reason management is confident it can reach its new AUV target.

CFO John Hartung reiterated the company's goal of passing through 40% of incremental store sales to cash flows. Raising the store-level sales target by $500,000 raises the estimated store-level cash flow by $200,000.

Chipotle also reaffirmed that it expects to more than double its current store count of 2,853 to 6,000 in the long run. The company is planning on opening around 200 new locations in 2021. At that pace, it would take more than a decade to reach 6,000 total restaurants.

Still, if you consider the potential increase to AUV, Chipotle should see nearly $600 million in additional annual cash flow, not including new store openings. Rarely do you get a quarterly earnings report with management updates that could result in such significant changes to long-term growth and cash flow. It's no surprise, then, why the stock was up double-digits the day following the report.