Media-streaming specialist Spotify Technology (NYSE:SPOT) is hardly setting the investing world on fire these days. The stock is trading 38% below February's all-time highs, having lost 19% of its market value over the last three months. Should investors load up on Spotify shares at these lower prices, or is the stock losing value for a good reason?

The growth engines under Spotify are running smoothly so far. In the first quarter of fiscal year 2021, total monthly active users (MAUs) rose by 24% to 356 million accounts. The number of premium subscribers increased 21% to 158 million names. Revenue posted a smaller gain of 16%, mostly due to unfavorable currency exchange trends. The average revenue per user (ARPU) fell 7% in dollar terms but came in just 1% lower as measured in constant currencies.

The company expects to add roughly 14 million net new MAUs in the second quarter alongside 6 million premium subscribers. Currency exchange effects should continue to weigh on Spotify's top and bottom lines for the rest of 2021. Still, there is nothing wrong with Spotify's customer growth charts.

Spotify is making heavy investments in exclusive content, both with popular music and in the podcast arena. Recent additions to Spotify's stable of podcast hosts include pop star Taylor Swift, comedian Joe Rogan, and the pairing of rock legend Bruce Springsteen with former President Barack Obama. These premium content creators were effective eardrum magnets for Spotify in the first quarter, and they should continue to pull in new customers in the coming quarters. 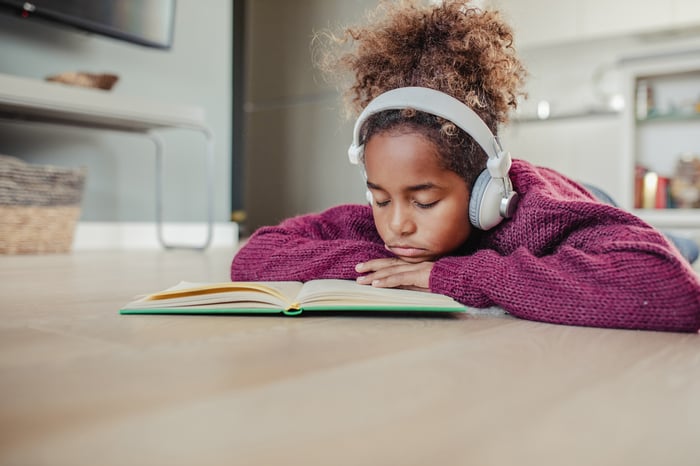 It's time to get some work done. Image source: Getty Images.

It's not all wine and roses for Spotify investors. You already saw how poorly the stock has been performing recently, and the price drop resulted from disappointing trends in the business model.

Spotify's ad-supported service is a notoriously low-margin operation. The company walks a thin line between running enough ads to turn a profit and limiting the advertising time to keep the free users tuned in. As a result, music royalties generally consume nearly all of the company's incoming ad revenue. The gross margin for ad-supported streams was 4.4% in the first quarter, and that's before considering common operating costs such as sales and marketing, product development, and employee salaries.

Premium services don't have that problem. Spotify saw a 28% gross margin for premium subscribers in the same period, supported by price increases in about 30 of its 180 geographic markets. Spotify would love to convert all of its ad-based listeners to paid-up subscriptions, but that will not happen anytime soon.

Instead, the growth trends are moving in the opposite direction. Premium revenue rose 14% year over year, while the less lucrative ad-supported sales jumped 46% higher. Hence, Spotify's profit margin is shrinking in the long run: 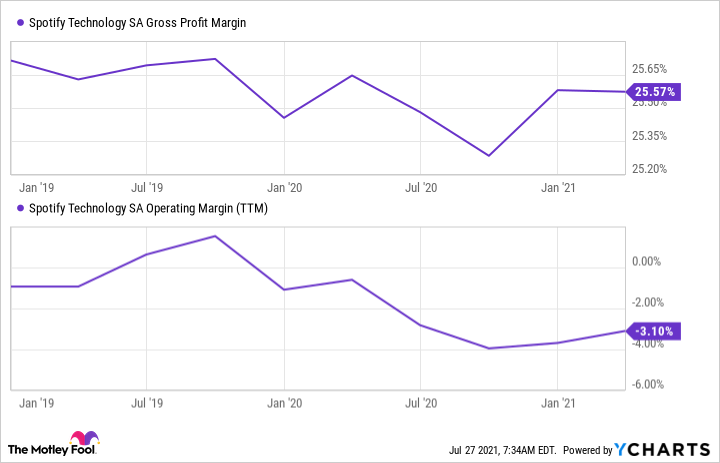 If you extend the business trends seen above for many years to come, you'll end up with a disappointing mess. The profitable premium subscriber business seems destined to drown in the growing horde of cash-burning free users. Buying Spotify stock under these circumstances sounds like a downright irresponsible idea, especially when the stock is trading at 160 times free cash flow.

But Spotify isn't resting on its modest laurels. The company wants to become "the world's number one audio platform," in the words of CEO Daniel Ek. That ambition implies Spotify wants to not only win the audio-streaming market, but also beat traditional outlets such as terrestrial radio. And the "audio platform" part of the goal refers to an expansive view of Spotify's role in the global audio market. Going beyond public podcasts and music tracks, the company is already selling paid audio-sharing services for business use.

"I continue to believe that the opportunity in audio is still largely untapped with tremendous growth potential, far beyond what most of us can imagine today," Ek said in April's first-quarter earnings call. "We believe we have at least five to seven times growth left in the business we are in today; music, podcasting, and paid audio, and we intend to win in those businesses."

Ek expects the audio market to be worth as much as $200 billion of annual revenue by the end of this decade. If he can establish Spotify as the go-to choice for audio services of every stripe, the company should be able to leverage that massive market slice to build a cash machine with sustainable bottom-line margins in the long run.

Talk is cheap, of course. Daniel Ek can't just push a magic button to achieve these lofty long-term goals. The company has a lot of work to do, and there will be lots of potholes in the road ahead. All things considered, I'm intrigued by Spotify's enthusiastic long-term goals, but I need to see some more progress toward sustainable business results before making a significant investment. For now, I see better ideas in other corners of the media-streaming industry.