Please ensure Javascript is enabled for purposes of website accessibility
Log In Help Join The Motley Fool
Free Article Join Over 1 Million Premium Members And Get More In-Depth Stock Guidance and Research
By Travis Hoium - Jul 8, 2021 at 8:27AM

Spending on content now could pay off down the line.

Spotify (SPOT 0.73%) has landed another top podcast, spending $60 million on the Call Her Daddy podcast that was formerly on the Penn National Gaming's Barstool network. This popular show joins The Joe Rogan Experience, Bill Simmons' The Ringer, Dax Shepard's Armchair Expert, and many others under the Spotify banner in one form or another, and the bill is quickly adding up to nearly $1 billion for podcast content.

The spending isn't surprising given Spotify's podcasting strategy. After being beholden to large studios in the music business, it's betting that controlling content in podcasts will be a better business long term. For investors, this could be a great move to drive this growth stock. 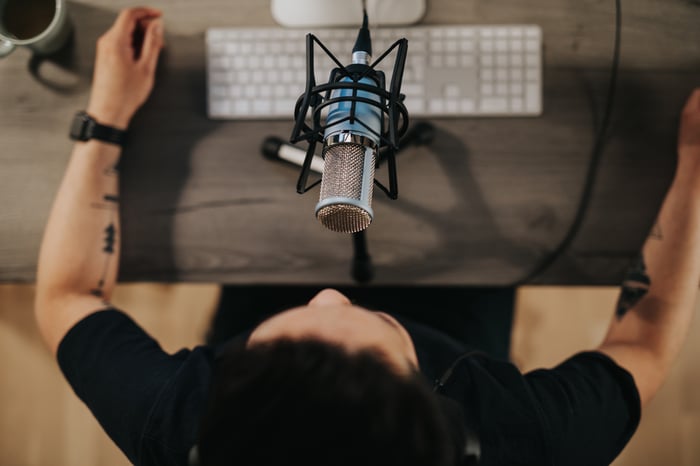 The key to Spotify's podcast strategy is becoming the go-to choice for both producers and listeners. If it can create a network of content that people keep coming back to, it'll be a platform every podcast needs to be on.

Spotify is building the foundation of this network largely through exclusive agreements and acquisitions. If you're a fan of Joe Rogan, for example, now you need to download the Spotify app and start listening to his podcast there. In theory, this could peel off some listeners from Apple's popular podcast app and other podcast players.

There should be at least some networking effects when it comes to the podcast business. If more creators are on the platform, it will attract more listeners and more listeners to track leaders of the economics around. And if Spotify attracts enough podcasts and listeners, it could become an advertising juggernaut.

Powerful podcasters are getting big exclusive deals from Spotify, but the company is paying big up front for content that isn't profitable yet. The bet is that eventually Spotify will be able to build out an ad network that will justify high price tags.

A higher-revenue ad network wouldn't just be good for Spotify exclusives, it'll also help attract lesser-known podcasts to the network looking for a way to monetize their content. Spotify has built a dynamic advertising platform to insert streaming ads based on user demographics, similar to how Google or Facebook do it, which could be very lucrative. Not only does Spotify have the ability to insert streaming advertisements in audio form, but it also can show display ads as podcasts are playing and is growing its video service as well.

If the ad strategy works well, it could mean Spotify can generate higher revenue per podcast for creators than creators could generate on their own. Think about this as similar to the way that Google made it easy to generate revenue on websites with inserted ads in the 2000s. There was no longer a need to reach out to advertisers to sponsor banner ads -- Google did all the work for website owners and generated more money than direct sponsorships could. This monetization platform made Google a juggernaut online, and Spotify is trying to do the same with the audio format.

Right now, Spotify's investment in podcasts doesn't seem to be paying off quickly. As I use the app today, there's a lot of open advertising inventory, and the revenue in podcasting clearly isn't going to be enough to generate much margin in 2021. In the first quarter, ad-supported gross margin, which includes podcast content costs, was just 4.4%. But the payoff isn't intended to be immediate; this is a long game for Spotify.

If we look at other advertising networks like Facebook, Google, and Snapchat, it took years for advertisers to begin valuing the space they were offering. But once advertisers start to learn how to create content that's effective and start getting bigger budgets, average revenue per user for Spotify should begin to go up rapidly.

Snap is a good recent example of a company that spent years generating losses as it built a larger user base and advertising platform. Now, it's seeing ad dollars grow quickly as advertisers learn how to build and value content on its platform. The chart below shows how Snap's average revenue per user has grown over the last few years.

We don't know if Spotify's trajectory will be similar, but with just $0.91 in revenue from all ad-supported monthly active users in the first quarter of 2020, there's a lot of upside potential on both the top line and in growing an anemic ad-supported gross margin of just 4.4%.

The investment Spotify is making in both attracting users and building out the advertising infrastructure isn't going to pay off this year or even next year; we're going to see the fruits of its spending 5 to 10 years from now. That's why I think the investments are great news, and this remains one of my top stocks today.