A new form of streaming is gaining momentum -- and that's not good for the iconic content company.

Netflix is becoming too big -- its market cap has already exceeded $220 billion. At that scale, innovation becomes harder to achieve, while the rise of competitors makes it easier for existing subscribers to flake. However, it's not just intense competition that is causing trouble.

A new practice is rapidly revolutionizing the streaming world that potentially has stock price implications. Let's look at why investors should be cautious about investing in Netflix. 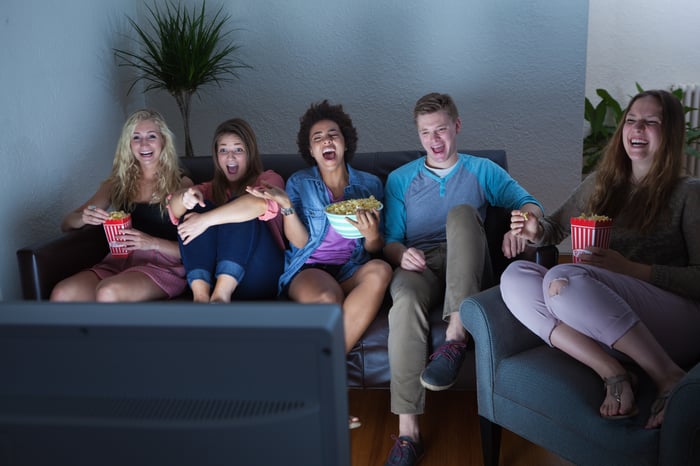 The devil in the detail

Netflix had a pretty amazing second quarter; its revenue went up 19.4% year over year to $7.34 billion. Simultaneously, the company's net income increased by 88% in the same period to $1.35 billion. Those are superb results, but one metric has puzzled analysts and investors alike: the recent loss of 430,000 subscribers in the U.S. and Canada.

Some say it's due to the popularity of other streaming services like Walt Disney's Disney+ or Amazon Prime taking market share. Some observe that as venues reopen following last year's lockdowns, people want to get out of the house and travel instead of sitting and home and watching movies. Others point to features like multi-device streaming that makes getting more than one subscription redundant. But I think there is another risk factor that investors aren't seeing.

The major risk ahead

Over the past few years, a practice known as synchronized viewing (or screen sharing) has gained momentum. This allows individuals to stream movies or TV shows directly to their family and friends free of charge. Intellectual property laws and their enforcement are somewhat archaic -- they have not caught on to the practice, so the whole thing is a grey area. For example, a user on the popular social app Discord can stream Netflix content to as many as 50 people at the same time. These instances are commonly known as "movie nights."

It's obvious why the practice is bad for the stock here. Only one person in the community needs a Netflix subscription to go live with the stream -- saving others a lot of money over the long run. One could realize additional savings by streaming in standard definition instead of high definition. Moreover, the rise of 5G will only make synchronized viewing more popular. Bored after a walk on the beach at a holiday resort? Just pull up an app that allows one to watch Netflix content together with friends -- anytime, anywhere.

There is no data on the phenomena per se as it is a fairly recent trend (but rapidly gaining in popularity). However, there are countless articles from major outlets regarding how to screen share and host virtual movie nights on services like Discord. By the way, that app has more than 150 million monthly active users and 19 million servers. Of course, the practice doesn't affect hard-line Netflix subscribers, but it does offer an enticing alternative for those who don't use it quite as often and can just "limp in" once a week to a stream with friends. Companies like Amazon have already caught on to the practice and have features that only allow Prime Members to join in on watch parties. But like Netflix, Amazon doesn't have the ability to prevent streams on third-party software.

At this point, investors are still viewing Netflix stock as one that will achieve growth over an infinite horizon. It currently trades for 8.5 times sales and 53.4 times earnings. But be warned -- the widespread adoption of synchronized viewing has made it far more economical to cancel one's Netflix subscription and just watch the same content on the friend's stream. Until Netflix does something about the practice, such as lobbying politicians to update intellectual property laws (which would inevitably anger a lot of subscribers), investors should expect subscriber count in the U.S. and Canada to continue to decline or stagnate.