Please ensure Javascript is enabled for purposes of website accessibility
Log In Help Join The Motley Fool
Free Article Join Over 1 Million Premium Members And Get More In-Depth Stock Guidance and Research
By Zhiyuan Sun – Aug 1, 2021 at 10:38AM

Yet another financial revolution is coming, but this time, it will likely disappoint cryptocurrency's biggest enthusiasts.

Many things have morphed beyond the realm of what we originally designed them to do, such as the internet. When Satoshi Nakamoto first invented Bitcoin (BTC -2.14%) in 2008, they envisioned it as a peer-to-peer electronic cash payment system free from the grasp of central banks and governments. Today, those two entities are encroaching on that idealistic dream with a strategy of "if you can't beat them, join them!"

The threat of central bank digital currencies (CBDCs) replacing decentralized cryptocurrencies is a real one, and investors are already seeing the signs. For example, the U.S. Federal Reserve is moving forward in developing its own cryptocurrency with a research paper coming out this summer. What's more, China's central bank is already on the verge of launching the digital renminbi (eYuan). So just what does this mean for the future of decentralized crypto? 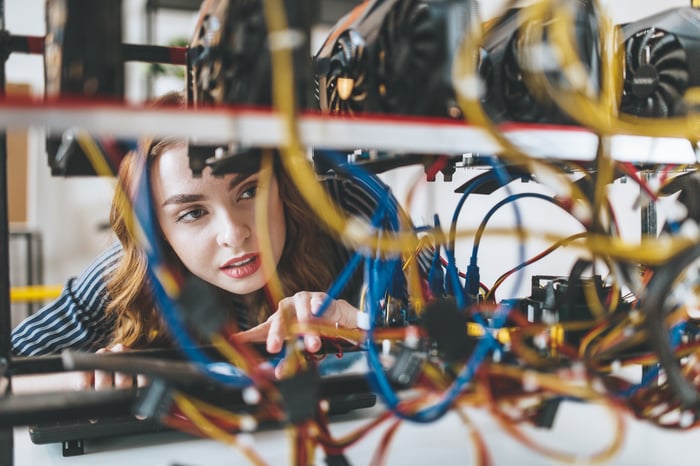 The empire strikes back

It's difficult to see all of the implications at first glance, but CBDCs have the potential to revolutionize our economy, for better or for worse. Let's say the Federal Reserve goes ahead and launches a digital U.S. dollar (eUSD) cryptocurrency. Like all cryptocurrencies, it will have a public ledger, allowing the Fed to see all consumer transactions on the network. Here's the kicker -- the Fed can then use that information to tabulate real-time economic data such as the consumer price index, manufacturing activity, and key product sales. This would greatly increase the Fed's ability to accurately adjust the federal funds rate to balance the economy.

In the event of a force majeure (i.e., a financial crisis, deadly pandemic, alien invasion, etc.), the Fed could send stimulus in the form of eUSD to all applicable parties. Afterwards, the entity could monitor blockchain transactions for direct insight into how recipients are spending and determine if more stimulus is needed for the recovery.

The corporate world would greatly benefit from such a system as well. For example, a blockchain analytics company could perform an analysis on all wallets associated with marijuana dispensaries/point-of-sales. It could then tally the transactions, quickly derive the industry's total addressable market and share this information with sector players to enhance their business strategies for the year.

Lastly, the Fed's eUSD would synergize well with law enforcement agencies and the IRS. Wallets suspected of engaging in illicit transactions or criminal activities could be suspended until their owners are no longer persons of interest. In addition, tax evasion would be far more difficult as the IRS could simply cross-reference wallet transactions with taxpayers' fillings to identify any discrepancies.

What this means for Bitcoin (and other cryptocurrencies)

Ideally, a CBDC network would have little to no transaction fees, be lightning fast, and be environmentally friendly, which goes against everything Bitcoin is right now. In addition, governments could implement recovery services if a coin is sent to the wrong address or simply perform a real-ID check for someone who lost their wallet key. Bitcoin has neither feature.

Moreover, a CBDC network's revolutionary potential, coupled with the legitimacy of government backing, has the potential to entice many people to flock to its coin, putting it in direct competition with decentralized cryptocurrencies. Since the latter require growing user adoption for sustained price appreciation, many cryptocurrencies could end up struggling in the face of this formidable competition.

Of course, CBDCs arguably give governments a lot of new power too, so the whole thing could turn dystopian. But the fact of the matter is governments want CBDCs to gain legitimacy for better economic planning. Decentralized cryptocurrencies might end up facing increased regulations and crackdowns as they're simply not part of the government-approved system. For the sake of argument, it's far more challenging to tabulate economic data if one half of the country uses the eUSD as a medium of exchange and another uses alternatives like Bitcoin. Hence, investors should brace for the possibility that the "golden age" of cryptocurrency investing is coming to an end.

Bitcoin Déjà Vu: What You Can Learn From Previous Downturns
356%