The stock market moved higher on Monday to start the new month.

Investors often seem to start a new month on a positive note, and Monday saw sustained gains for major market benchmarks. Market participants seem to be comfortable that the economy will be able to find ways to overcome any challenges from rising COVID-19 case counts. As of 11:30 a.m. EDT, the Dow Jones Industrial Average (DJINDICES: ^DJI) was up 121 points to 35,057. The S&P 500 (SNPINDEX: ^GSPC) gained 18 points to 4,414, and the Nasdaq Composite (NASDAQINDEX: ^IXIC) picked up 93 points to 14,765.

Over the weekend, Square (NYSE: SQ) surprised investors by releasing earnings early and announcing a huge acquisition. Yet even though the move will ramp up competition pressures on another key player in the buy-now, pay-later fintech space, shares of a key rival to the company that Square bought out also moved higher. Below, we'll look at why Wall Street seems to think this competitor could be the next acquisition target.

Shares of Square moved higher by 11% on Monday morning. The electronic payments specialist and fintech disruptor made a major strategic move by acquiring Australia's Afterpay (OTC: AFTP.F) in a deal worth $29 billion. 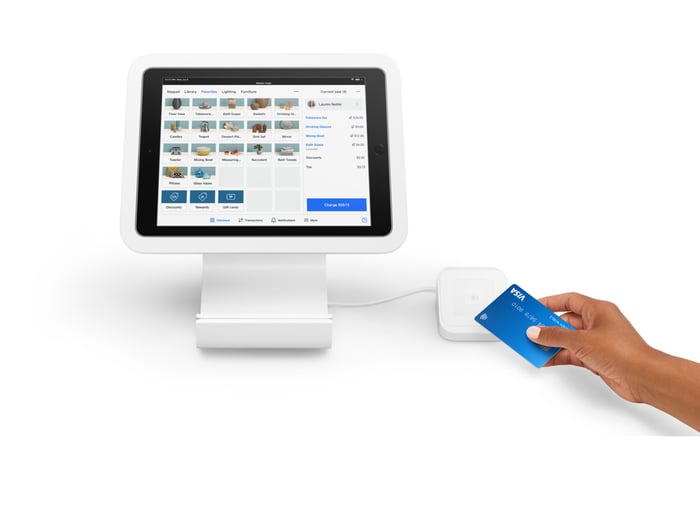 Under the terms of the deal, Afterpay shareholders will receive 0.375 shares of Square for every Afterpay share they own. Square reserved the right to pay a modest 1% of the total value of the deal in cash rather than shares, presumably allowing for redemptions of fractional shares as necessary.

The deal has benefits for both parties. For Afterpay, access to Square will dramatically accelerate its efforts to penetrate the U.S. market with its installment payment service. Meanwhile, Square will gain visibility in the increasingly popular buy-now, pay-later space, as younger consumers seem to prefer that method of shopping compared with credit cards and other ways to buy without making full payment up front.

The all-stock deal allows Square to use its high-flying shares as currency for a smart acquisition. Interestingly, though, a company that's going to be one of Square's main competitors also gained on the day.

Affirming the value of buy-now, pay-later

Shares of Affirm Holdings (Nasdaq: AFRM) were up even more sharply than Square, gaining 14%. The move comes despite the fact that Affirm will face plenty of pressure from a combined Square and Afterpay, but it seems to reflect expectations that another player in the fintech industry will swoop in to offer Affirm a deal that shareholders can't refuse.

Affirm has made big strides forward, building on an initial relationship with connected fitness specialist Peloton Interactive by forging a partnership with e-commerce enabler Shopify. The move higher for the stock comes after a brief drop on news that Apple would look to offer its own direct installment payment service.

Square's strategic acquisition raised the obvious question of whether another company will come in to buy Affirm. PayPal Holdings was seen building its own buy-now, pay-later service, but it could seek to accelerate its efforts by buying Affirm. Similarly, card giants like Visa or Mastercard have been known to make strategic acquisitions of innovative companies in order to keep pace with transformative efforts in the payments space.

It's too early to tell exactly what will happen with Affirm. However, Square's purchase of Afterpay ups the stakes in what was already a popular investment area.

Why Did Shares of Block Fall 27% in April?

Why Block and DoorDash Bounced Back Friday Morning