These stocks should grow your money for a long time.

It can be overwhelming to find the right investments in the stock market. There are thousands of companies that are publicly traded, but another obstacle some investors face is not knowing how much money to start with.

Fortunately, you can start with almost nothing through fractional shares. Furthermore, a small investment can go far if you hold shares in a growing business for a long time period. For example, if you invest $25 every month at 10% annual growth, that seed will grow to $433,000 in 50 years. That's the power of compounding returns.

Here are two great stock ideas to get started. 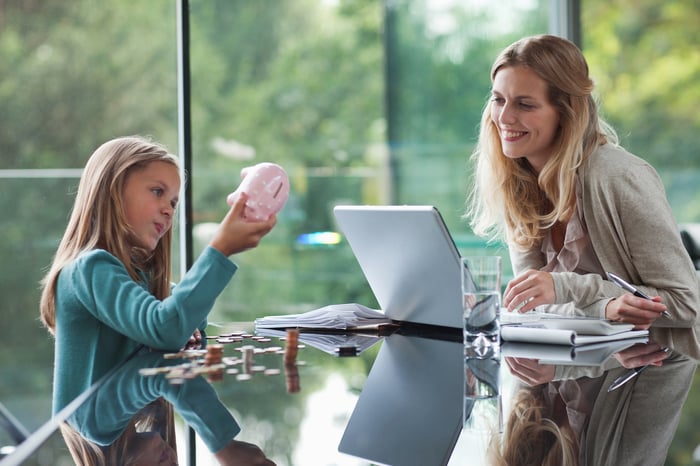 Walt Disney (DIS 0.85%) has delivered a return of 422% over the last 10 years and could very well repeat that performance over the next decade. It owns some of the most valuable brands in the entertainment industry and has only just started to dip its toes into the burgeoning media-streaming market.

Since launching in 2019, Disney+ has grown rapidly to over 100 million subscribers. More original shows coming from Star Wars, Marvel, and Pixar should push the service closer to management's target of at least 230 million subscribers by fiscal 2024.

The stock has rebounded sharply off the March 2020 lows at the start of the pandemic, and this could be the start of a rewarding run for investors. Management sees a long runway of growth with as many as 1 billion people around the world identifying as Disney fans. The company found that 95% of the population in the company's top 12 global markets engaged with Disney content in 2020. That shows high brand recognition worldwide, which is a major competitive advantage.

Recovery from the pandemic should also bring a boost in revenue from Disney's theme parks, which experienced a sharp drop in sales last year. This segment contributed nearly half of Disney's operating profit in fiscal 2019, and the parks segment should continue to grow over time. Management reported in May that its measurements of intent to visit Disney's parks have been trending comparably to 2019 levels, which could be a sign of pent-up demand.

The stock has pulled back in recent months, which could present a good buying opportunity. While it's unclear what the recent spike in COVID-19 cases could mean for the reopening of Disney's parks, there is still substantial long-term upside here once the entertainment empire is firing on all cylinders again.

With more streaming services launching over the last few years, Roku (ROKU 1.59%) is benefiting from growing demand. It's the leading TV operating system, ending the first quarter with 53.6 million active accounts, up 35% year over year.

The acceleration in growth during the pandemic pushed the stock sharply higher, but I believe it could double again over the next three to five years, given the tailwind behind the streaming market.

Roku will report its second-quarter results on Aug. 4. In the first quarter, the number of streaming hours on its platform totaled 18.3 billion, up 49% over the year-ago quarter. This robust growth is turning Roku into an advertising machine, with average revenue per user increasing by 32% in the first quarter.

The company makes some money from selling hardware devices, such as the players that connect to a TV. But most of its revenue comes from the platform itself, where it sells digital advertising and gets a share of subscription fees that users pay to third-party services on the platform.

Other than the secular growth in streaming, the shift to digital ad spending is one of the main reasons you want to consider buying shares of Roku. eMarketer expects digital ad spending as a percentage of total media ad spending to grow from 51% to 67% by 2024. That represents an incremental increase of over $300 billion in ad spending, and the growth in the digital video space will drive a good portion of that amount.

In 2020, digital video advertising increased by 20% year over year, reaching $26 billion, according to the Interactive Advertising Bureau's report with PricewaterhouseCoopers.

One catalyst to watch is Roku's entry into original content. The company recently reported that "millions of people" streamed a Roku Original within the first few weeks of launching this new content.

Roku is finding ways to more deeply engage its users, and its investments in Roku Originals and The Roku Channel could lead to wealth-building returns for investors.

Invest in the growth of digital entertainment

The growth in the global streaming market is far from over. A report from the consulting firm Grand View Research estimates the market will grow 21% annually through 2028, especially as new technologies continue to improve video quality. Disney and Roku are two top entertainment stocks to ride these long-term trends.