Microsoft (NASDAQ:MSFT) posted its fourth-quarter earnings on July 27. Its revenue rose 21% year-over-year to $46.2 billion, clearing expectations by $1.9 billion, as its earnings jumped 49% to $2.17 per share and beat estimates by $0.25. Its commercial cloud revenue -- which mainly comes from Microsoft 365 (formerly Office 365), LinkedIn, Dynamics CRM, and its cloud infrastructure platform Azure -- increased 36% year-over-year to $19.5 billion. 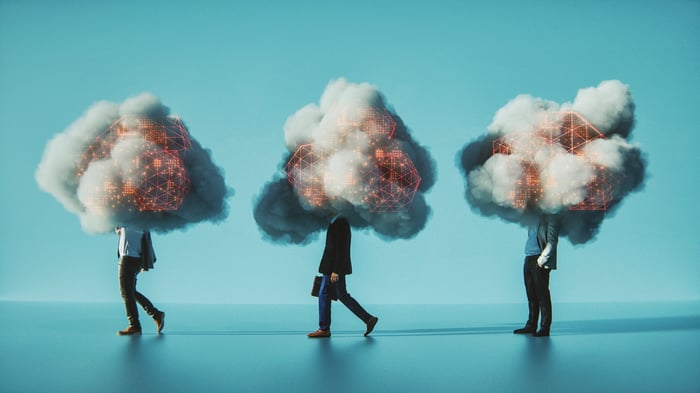 1. It's one of Microsoft's most important businesses

Azure controlled 22% of the global cloud infrastructure market in the second quarter of 2021, according to Canalys. That puts it behind AWS' 31% share, but far ahead of Alphabet's (NASDAQ:GOOG) (NASDAQ:GOOGL) Google Cloud, which ranked third with an 8% share.

Revealing exactly how much revenue and profits Azure is generating would let investors know if Microsoft has pricing power in this competitive market, or if it's merely trading margins for market share.

Amazon's AWS revenue rose 30% to $45.4 billion, or 12% of its top line, in 2020. The segment's operating profit increased 47% to $13.5 billion and accounted for 59% of its operating income. In other words, Amazon can subsidize the expansion of its lower-margin retail business with its higher-margin cloud business, which gives it an advantage against other online and brick-and-mortar retailers.

Alphabet's Google Cloud revenue rose 46% to $13.1 billion, or 7% of its top line, in 2020. The unit's operating loss widened from $4.6 billion to $5.6 billion, but Alphabet's total operating income still increased 20% to $41.2 billion. These numbers suggest Google Cloud is offering lower prices than AWS to expand its market share, but it can afford to pursue this loss-leading strategy because it can offset its cloud losses with its higher-margin ad revenue.

With Azure, investors still don't know exactly how much the cloud platform is boosting Microsoft's revenue, or how much it's dragging down its earnings growth.

During the fourth quarter, Microsoft said its commercial cloud gross margin "increased 4 points to 70% despite revenue mix shift to Azure," and its 14% year-over-year increase in operating expenses was mainly "driven by investments in Azure" -- but we don't know exactly how much it spent.

These vague statements tell us three things about Azure: it generates much lower margins than Microsoft's other commercial cloud businesses, it's offering customers lower rates to keep up with AWS and Google Cloud, and it's constantly expanding with new investments and services.

Providing exact revenue and operating profit figures would clear that air and show investors exactly how much money Microsoft is losing (or possibly making) from one of its fastest-growing businesses.

Microsoft's former CEO Steve Ballmer urged the company to disclose its cloud revenue, margins, and profits back in late 2015, but his successor, Satya Nadella, didn't comply. Nadella's stance made sense back then, since Microsoft was just starting its "mobile first, cloud first" transition, but it doesn't make much sense today -- especially after Amazon and Google laid all their cards on the table.