Physical property is one of the least disrupted industries in a world that is becoming increasingly digital. However, technology company Matterport (MTTR -4.88%) is turning physical property into 3D spaces, unlocking various new ways that businesses can use properties. Matterport could be a game changer for investors. Here are three important reasons why.

Savills World Research estimates that the total value of buildings worldwide could be as high as $230 trillion; most of it is "offline," as these buildings were built years before the internet. These buildings are isolated from the digital world, and are only viewable in photo images and "blueprints," documents that map a space's dimensions and features.

Matterport is bringing buildings into the digital world. Using a combination of special cameras and its smartphone app to record physical spaces, Matterport's patented software then converts them into 3D models that can be viewed, measured, and interacted with. 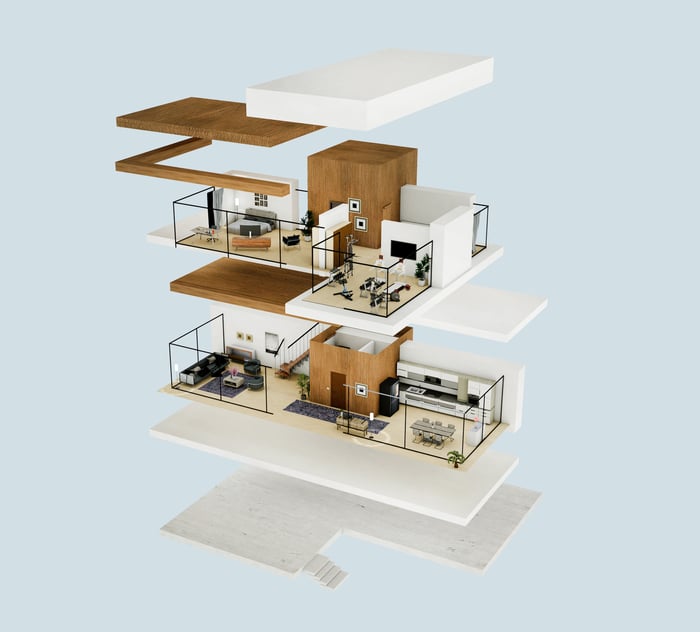 Matterport was founded in 2011, but only went public last month via a SPAC. To date, the company has captured 4.9 million spaces, totaling 15 billion square feet. Management estimates that this is 100X more than its closest competitor, giving Matterport a significant first-mover's advantage.

2. Matterport has many uses

The massive global supply of buildings translates to an addressable market that management estimates to be $240 billion. Matterport's potential upside will be determined by how well it can capture that market.

Digitizing property unlocks a variety of uses for Matterport's customers. Existing customers are using the technology to give consumers digital access to properties. Prospective homebuyers can tour digital versions of houses on Redfin, and renters can preview properties before booking them on Airbnb. Insurance companies can document property claims better than photos could. Retailers are even starting to use Matterport to construct virtual representations of their stores, where online customers can browse and purchase from within 3D storefronts.

Matterport has collected more than 3 billion data points to date, and management hopes to begin using that data to provide data-based insights to its customers. This could include measuring dimensions within buildings, breaking down trends, or simply answering customer questions. Imagine wanting to replace windows in a commercial building and being able to determine measurements without setting foot on location!

From maintenance to real estate to retail, there are many ways that companies can use digital spaces. The many buildings in the world and the potential applications of this technology could lead to years of potential growth opportunities for Matterport.

3. Fueling many years of growth ahead

Matterport sells camera hardware for capturing spaces and offers its technology on a subscription-based model. Revenue in 2020 was $86 million, with 38% being hardware sales. The company's subscriptions have higher gross margins than its product sales, and management expects subscription revenue to outpace hardware sales over time, increasing Matterport's overall profitability. The business is not currently profitable, however, having lost $11.6 million from operations in 2020.

Matterport's business is positioned to grow revenue for the foreseeable future thanks to the multiple ways the company is expanding. It released a smartphone app in 2020, for example, which has made it much easier to get started on the platform.

It offers a "freemium" model, where users can try Matterport for free before becoming paid customers to unlock the full platform. Enterprise customers that have converted from free to paid subscribers include Shopify, Starbucks, Hermes Paris, and Andersen Windows & Doors. Management disclosed that 13% of the Fortune 1000 are currently using the free model.

Its subscriber growth increased six-fold in 2021's Q1 over 2020, growing total revenue 108% to $26.9 million year-over-year. Management is guiding for 2021 full-year revenue to grow 43% from 2020 to $123 million. The increase in subscribers could indicate strong revenue growth over the coming years, because customers spend 29% more after subscribing to Matterport's platform.

Is Matterport a buy today?

Matterport is newly public and is still just under $4 billion in market cap, giving investors long-term potential if the business can successfully grow. Matterport trades at a price-to-sales ratio of 30 using 2021 estimated revenue, a similar P/S ratio to that of other high-growth software stocks. Shareholders will want to make sure that subscription growth continues and that Matterport successfully converts freemium users into paying customers.

With such a large addressable market, its distinct first-mover's advantage, and little notable competition, Matterport is a company that could grow into its valuation, rewarding patient investors over time.

Why Matterport Has Massive Upside Potential
376%