The Nasdaq Composite is holding up better than its fellow market benchmarks.

Wednesday was generally a down day in the stock market, with major indexes showing losses of as much as 1%. However, the Nasdaq Composite (^IXIC) held up quite well, just barely falling below the unchanged mark as of noon EDT.

Most people think of tech stocks when they consider the Nasdaq. But today, it was the biotech industry that scored some big wins that helped the index outperform its peers. Below, we'll highlight BeyondSpring (BYSI -1.04%) and Novavax (NVAX -2.88%) and their contributions to give the overall Nasdaq a boost.

Hope for a big win against cancer

Shares of BeyondSpring skyrocketed almost 150% as of midday on Wednesday. The clinical-stage biotech company announced extremely encouraging results in a phase 3 trial that had investors excited about the future of a key pipeline candidate treatment.

BeyondSpring has been conducting a phase 3 clinical trial of its cancer therapeutic plinabulin in patients with certain types of non-small cell lung cancer. The company released positive top-line data from the trial, showing that combining plinabulin with the common chemotherapy treatment docetaxel increased overall survival compared to chemotherapy alone. The BeyondSpring drug also met key secondary endpoints, including overall response rates and progression-free survival, as well as reductions in incidents of grade 4 neutropenia. 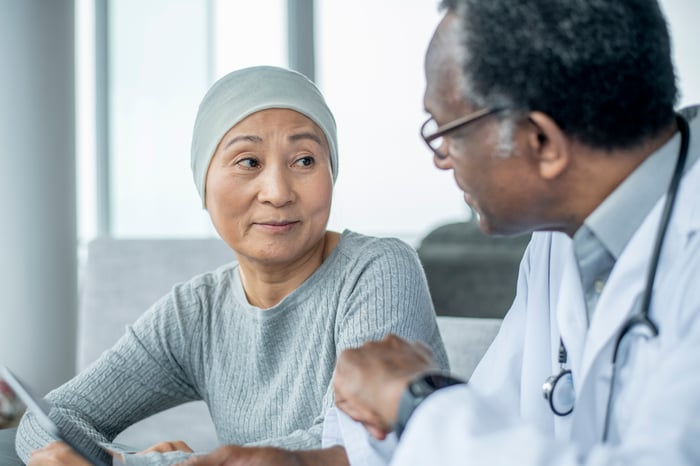 The news comes as a pleasant turnaround for shareholders, who've had to deal with a steady decline in the biotech company's share price since 2017. Sluggish progress forced BeyondSpring to do stock offerings to raise cash in past years, diluting investors and causing some to question its future potential.

Now, investors are hopeful that BeyondSpring will be able to use these study results as the basis for gaining approval from the U.S. Food and Drug Administration (FDA). That won't happen overnight, and investors might need to prepare for another stock offering with the price having skyrocketed. In the long run, though, a successful cancer treatment could be a major win for BeyondSpring.

A big sale for Novavax

Elsewhere, shares of Novavax vaulted higher by nearly 20%. The COVID-19 vaccine developer still hasn't received full approval for its candidate, but that's not stopping buyers from lining up to purchase it in the hope that it will get approved soon.

Novavax signed a new agreement with the European Commission under which the EC will buy up to 200 million doses of its experimental vaccine. The agreement calls for initial shipments of 100 million doses, giving the government body an option to double its purchase through 2023.

Novavax has been optimistic that its vaccine will offer a different way for health officials to protect against COVID-19 infection. The company's candidate is a protein subunit vaccine, which differs from the mRNA vaccines and vector vaccines that have been available in Europe and the U.S. to date.

Nevertheless, until Novavax actually gains approval from the FDA and the European Medicines Agency, none of these agreements will produce any true revenue for the company. That means that even with today's big gain in Novavax shares, there could be even more upside if a favorable determination from regulators comes in the near future.