But don't let that distract you from the company's attractive qualities.

After reaching an all-time high of $171.09 on Jan. 14, Peloton Interactive (PTON 13.00%) stock has shed 30% of its value in the past six months. Investors are clearly concerned the at-home fitness leader's business will suffer as the U.S. economy reopens and more people start to feel comfortable joining gyms again.

Peloton has also been battling supply chain and safety issues, both of which have added to the pessimistic sentiment around the stock. But the company's business is booming, and it will continue to benefit from powerful competitive advantages in a market with plenty of room for growth. 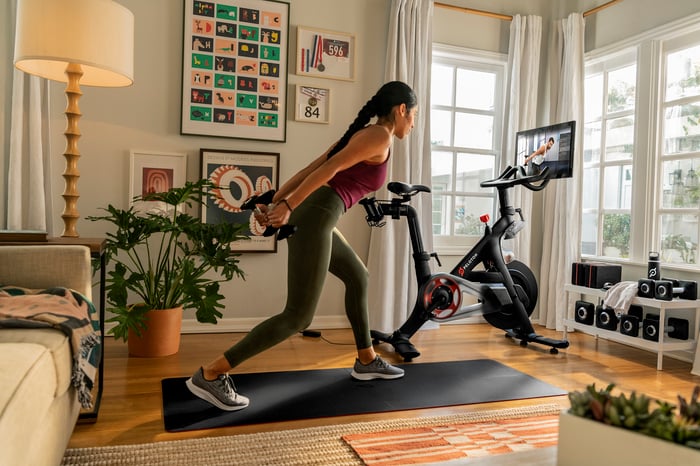 The company was certainly not the first to develop stationary bikes and treadmills, but Peloton is doing it better than anyone else. Sales have surged since the pandemic struck last March, and this momentum has persisted even as many regions lift their COVID-based restrictions. In the fiscal 2021 third quarter, which ended March 31, revenue jumped 141% versus the year-ago period to $1.26 billion.

The company has two main drivers behind its competitive advantage -- intangible assets and switching costs. These should ease investors' worries about the business.

Intangible assets, including its strong brand and technological know-how in creating a fantastic user experience, will be hard for rivals to replicate. With a net promoter score (NPS) of 94, Peloton has a better reputation with its customers than what even tech giant Apple or fast-food chain Chick-Fil-A enjoy. Boosting this advantage is the sheer amount of data Peloton collects from users, which it can use to keep improving its hardware and software offerings.

Once customers shell out the hefty investment for Peloton equipment (a Bike costs just under $1,900), they're also more likely to commit to the Peloton ecosystem. And customers do stick with the equipment, as evidenced by the company's impressive average monthly churn of just 0.31% for connected fitness subscribers in the fiscal third quarter, a six-year low. User engagement overall is impressive with connected fitness subscribers completing an average of 26 workouts per month in the quarter. That represents the strongest level of engagement since the pandemic started.

Peloton still has serious growth opportunities in front of it. The business only operates in the U.S., Canada, the U.K., Germany, and Australia (where it launched on July 14). That leaves plenty of other developed markets to grow into, and the company can profit incrementally by selling subscriptions to its lower-cost digital app in developing countries too.

And the company only sells stationary bikes and treadmills at this point. Just think of the possibilities for it to expand into different types of connected fitness equipment. Peloton could bring to market a rowing machine, an elliptical, and more. Younger and less affluent customers make up an increasing share of its user base. And according to a 2019 survey, a whopping four out of five members were not in the market for home exercise equipment before purchasing a Peloton machine.

Besides geographic and product expansion, Peloton has other possible ways to grow its addressable market. It recently announced the release of an in-app video game called Lanebreak for its exercise bikes. And the company is reportedly working on a digital heart-rate armband to enter the wearables market, which would pair wirelessly with existing Peloton products and allow users to more accurately track their workouts.

A new corporate wellness program will let different companies offer subsidized Peloton memberships and other benefits to their employees. What's more, a partnership with insurance giant UnitedHealth Group offers even more opportunities in wellness as the insurer's policy holders can sign up for Peloton memberships free of charge for a set period of time.

Shareholders appear to have regained some optimism around Peloton's prospects -- shares have risen considerably since early May. But don't let the stock's negative overall performance this year dictate your behavior as an investor. Strong competitive advantages will protect Peloton's position for a long time. Coupled with its seemingly never-ending list of new initiatives, those advantages give investors plenty of reason to be bullish.