Please ensure Javascript is enabled for purposes of website accessibility
Log In Help Join The Motley Fool
Free Article Join Over 1 Million Premium Members And Get More In-Depth Stock Guidance and Research
By Zhiyuan Sun – Aug 4, 2021 at 8:24AM

The No.1 digital currency is staging a comeback. Will it last?

The cryptocurrency mania that gripped investors for much of 2020 took a 180-degree turn in April. Since then, Bitcoin's (BTC 2.44%) value plunged by about 53% before rebounding 28% in the last two weeks.

The coin is now teetering near $38,000 levels after its short-term risk factors have dissipated somewhat. So can investors count on the iconic cryptocurrency once more to carry their account balance to the moon? 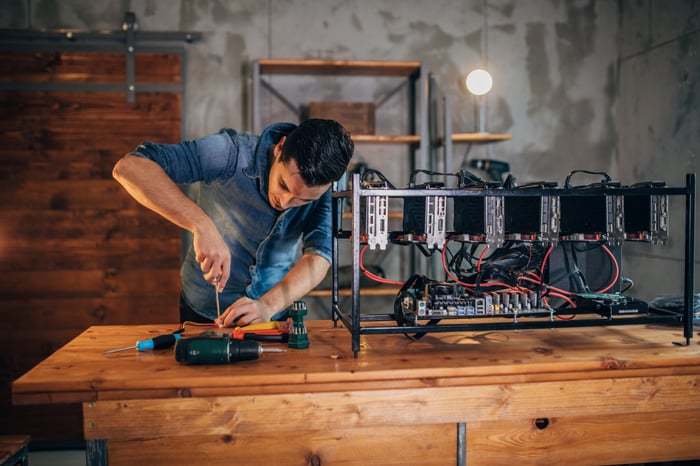 Blessings from the triumvirate

But the biggest catalyst of the three is Wood's plan to ready the first Bitcoin ETF fund, which would trade under the symbol "ARKB" if approved by regulatory agencies. Like all networks, Bitcoin derives its intrinsic value based on its number of users. As more users flock to the network, they bring in more capital, which causes the price of each coin to rise as the supply is limited. An ETF accomplishes just this as it allows more investors to become "Bitcoiners" without worrying about exchange hacks or paying ludicrous account fees to purchase the asset.

Bitcoin has always been popular among Chinese elites, as it provides a method of siphoning capital abroad in lieu of the Central Government's stringent policies against doing so. Recent provincial crackdowns on crypto mining and the banning of financial institutions from dealing with crypto investors has caused fear, uncertainty, and doubt to spread. However, it's not game-ending.

The ruling Chinese Communist Party has stopped short of banning ownership of cryptocurrencies. So Chinese billionaires and entrepreneurs alike could easily use offshore accounts, offshore exchanges, and "stooge" entities to buy Bitcoin and transfer their hard-earned money abroad, bypassing recent regulations. Remember that capital inflows into Bitcoin would inevitably cause its price to rise because the supply is fixed, so the coin could continue its rally for some time. Keep in mind that there are only about 74.5 million Bitcoin wallet users out there, so its adoption is far from fully saturated.

But the long-term prospects remain uncertain

Bitcoin's network is full of catalysts and inhibitors. On the one hand, growing user adoption, rising retail investor demand, more vendors accepting Bitcoin, and countries adopting it as legal tender (like El Salvador) would all increase its value. On the other hand, issues like government crackdowns and environmental sustainability pose significant risks to its moon mission.

Speaking of the matter, Bitcoin's mining difficulty goes up exponentially over time, so miners need to purchase better GPUs that consume more electricity. Right now, it takes 1,544 kWh of electricity to process just one Bitcoin transaction, which is about the same amount of energy that an average U.S. household consumes in 53 days. At this rate, I'd expect Bitcoin's energy use to surpass that of global energy production by the end of the century.

What's more, Bitcoin faces a looming risk of replacement by central bank digital currencies (CBDCs). Both the U.S. Federal Reserve and the Chinese Government are considering implementing such an idea. For example, the issuance of a digital USD token would allow the Federal Reserve to monitor consumer transactions on the public ledger, gaining real-time insight on economic indicators and allowing it to adjust rates accordingly. But such a measure would not be possible if there are competing, decentralized cryptocurrencies in use, leading to incomplete consumer data. So I think it's only a matter of time before governments strike back at the network.

Overall, Bitcoin fell too fast and too hard to warrant a short-term trading rebound. However, the long-term risks are only just emerging. I would recommend investors wait for the bubble to deflate more on the way down before considering opening a stake.