Shares of the movie theater stock fell after shareholders rejected a dilution plan and as Disney's "Black Widow" played well with the streaming audience.

Shares of AMC Entertainment (AMC -9.40%) were pulling back last month as the high-flying movie theater stock got a dose of reality when Disney (DIS -3.79%) successfully debuted "Black Widow" in theaters and on Disney+ simultaneously. The news added credence to the argument that movie theaters are getting disrupted by streaming services, especially after the surge in streaming during the pandemic.

According to data from S&P Global Market Intelligence, the stock finished the month down 32%. As you can see from the chart below, the stock's slide came during the first half of the month. 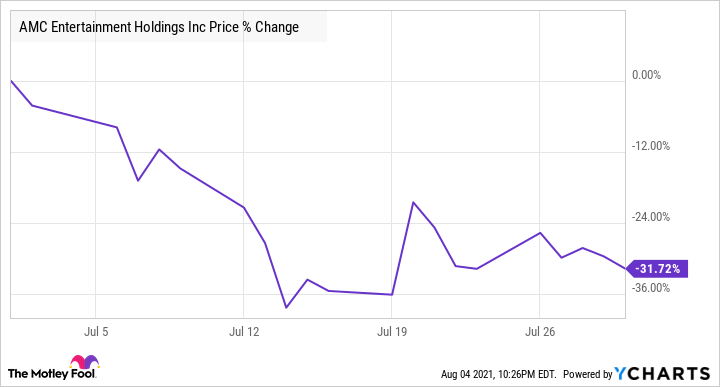 AMC stock fell 28% over a three-day span after Disney reported the results for "Black Widow" on opening weekend. The entertainment giant said that "Black Widow" brought in $215 million at the box office and through Disney+ Premier Access, which allows subscribers to the stream new movies for a $30 fee in addition to the price of the subscription. Disney said that "Black Widow" brought in more than $60 million for Premier Access, which is more valuable than box office revenue since Disney doesn't share that revenue with theaters. Typically, theaters and studios split box office revenue 50/50.

A decision by AMC shareholders to reject the company's plan to sell 25 million more shares also seemed to drive the stock lower as it signaled that investors had become fed up with the near-constant share dilution over the last year. That may have also indicated that the meme stock rally in AMC was coming to an end.

AMC stock soared to stratospheric levels in June after CEO Adam Aron announced a special investor rewards program, tied into the customer-facing Stubs reward program, in an attempt to fuel retail excitement over the stock.

However, it's been clear that the stock has been overvalued for months, and AMC may finally be starting to return to earth. The stock has continued to slide in August as meme investors may be moving on to the next big thing, but AMC could still have a long way to fall from here.