The results weren't nearly as bad as last week's sell-off made them out to be.

As a Teladoc Health (TDOC -7.26%) shareholder, I cringed when I saw the stock's initial sell-off on July 28, the day the company released its second-quarter results last week -- it fell as much as 11.8% before recovering. Often, a stock's price after earnings provides a good sense of how good or bad the numvers were. But it can also be misleading in many cases, especially when investors overreact.

That's what I believe happened with Teladoc -- the earnings report wasn't nearly as bad as I expected it to be based on the reaction. Although the company's net loss of $0.86 per share was worse than the $0.56 loss analysts were expecting, it was actually a pretty good quarter for the company, and there were many positives to pull from it. 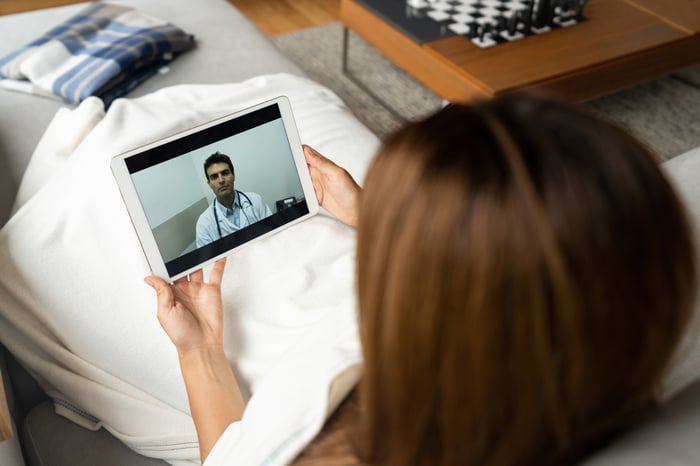 I was expecting a drop-off in virtual visits, given that many areas are reopening and in-person visits to the doctor's office are resuming. However, not only did Teladoc fail to report a drop in visits, it counted 3.5 million for the period ending June 30  -- higher than the first quarter's numbers of 3.2 million, and higher than management's guidance, which forecasted a range of 3.2 million to 3.4 million. And the company expects that number to continue growing, potentially topping 3.6 million visits in the third quarter.

Revenue in Q2 totaled $503 million, up 11% from the previous quarter. Historically, the company has said that the first and fourth quarters of the year are its busiest, as those are the periods associated with benefits enrollment season. Q1 and Q4 are also when the company says visit fees are the highest, since winter is when people normally get sick with colds and flu. For Teladoc to have such a strong showing in a traditionally "off" quarter for the company is a great sign for the business.

Adjusted earnings were better than in prior periods

Investors may have been alarmed at Teladoc's Q2 net loss of $133.8 million -- more than five times the $25.7 million loss it incurred a year earlier. However, it's important to be careful when comparing these periods, because a year ago the company had not yet closed its acquisition of chronic care company Livongo -- that didn't happen until October 2020. The prior-year results are skewed since they reflect a different business, one much smaller than the one that includes Livongo. Deprecation and amortization expenses alone are $40 million higher than they were a year ago.

A more appropriate measuring stick might be the company's Q1 results. Compared with those numbers, Teladoc showed improvement, as in the previous period its loss topped $200 million. And when looking at the company's adjusted earnings before interest, taxes, depreciation, and amortization (EBITDA), which factors out noncash items, Teladoc's profit was $66.8 million in Q2 -- more than double the $26.3 million it reported a year earlier. It was also higher than Q1's adjusted profit of $56.6 million.

Ironically, the company may have done itself a disservice by providing too much information and guidance on its net loss for the year. In the Q2 earnings release, management forecasted that the net loss per share for 2021 would range between negative $3.35 and negative $3.60. Although that's an improvement from last year's net loss per share of $5.36, investors may have been alarmed at the sign that still more losses were on the way. Through the first six months of the current fiscal year, Teladoc's net loss sits at a negative $2.16 per share, so a forecasted loss of $3.60 may not have suggested enough improvement for bearish investors.

In the two previous periods, the company didn't provide a net loss guidance at all for the full year, so it's impossible to tell whether this outlook has gotten better or worse. Adjusted EBITDA guidance for 2021 remains the same, however. Teladoc still projects that to be within a range of $255 million to $275 million.

The important thing is that th company does appear to be moving in the right direction; for the third quarter, it expects a per-share loss of no worse than $0.78, slightly better than the $0.86 loss it incurred in Q2.

Is Teladoc a buy?

There isn't anything in Teladoc's most recent results to convince me the company is headed in the wrong direction or that it has become a worse investment than it was before the release of the report. It still has significant potential now that Livongo is part of its business and the two companies can serve the needs of a wider customer base. And the recent announcement that Teladoc is partnering with Microsoft and will integrate its platform with the Teams application is another great opportunity that could lead to even more growth down the road.

In the past year, shares of Teladoc have fallen more than 37% while the S&P 500 has risen 35%. The healthcare stock is trading near its 52-week low of $129.74 and could be a good pickup for long-term investors. Analysts from Fortune Business Insights project the telehealth market will be worth nearly $560 billion by 2027, growing at a compounded annual growth rate of 25.2% until then. Owning an industry leader like Teladoc could be a great way to gain exposure to the hot telehealth segment.