The company doesn't have a growth problem -- it has a demand problem.

Amazon's (AMZN 0.24%) latest earnings results were enough to beat analysts' expectations, but the stock fell after management issued lower-than-expected guidance for the third quarter. After reviewing management's comments on the earnings call, it appears this is another case of the market missing the forest for the trees.

As of this writing, the stock is down 6.5% since the earnings report, but strong demand from new Prime customers is causing Amazon to spend aggressively to support growth. The e-commerce giant's record of generating high returns on capital should give investors a good reason to pick up some shares during this pullback. 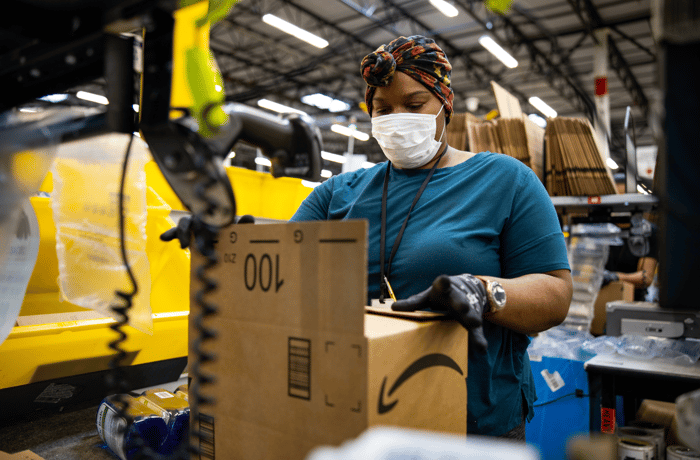 Watch for another revenue acceleration

Amazon posted revenue growth of 27% year over year in the second quarter, or 24% adjusted for currency fluctuations. That's a sharp deceleration from the first quarter's 41% currency-adjusted growth. But the biggest problem for investors was management's third-quarter guidance, which calls for year-over-year revenue growth to further decelerate to between 10% and 16%.

As a result, many have overlooked the increased capital spending. When Amazon has increased such investments in the past, it usually results in an acceleration in revenue growth soon after.

For the trailing 12 months ended June 30, capital expenditures totaled $47.2 billion, up 144% from the year-ago period.

This spending is going toward a number of internal projects, but most importantly, Amazon is expanding its fulfillment capacity as CFO Brian Olsavsky explained during the earnings call, "This is all part of a multiyear investment cycle for us. Unit volumes, while obviously growing at lower rates off last year's large comp, continue to remain high, and we see strong demand for [fulfilled by Amazon] and third-party sellers."

Olsavsky also mentioned the investments are going toward building out the last-mile and middle-mile delivery capabilities of Amazon's transportation network to support fast-shipping offers for customers.

The pandemic has presented Amazon with an excess demand problem. With 50 million new Prime members added during the pandemic, Amazon is having to quickly ramp up spending to support its much larger customer base.

Last year, Amazon saw a notable acceleration in revenue growth from the first to the second quarter, partially thanks to its addition of greater fullfillment capacity and hundreds of thousands of employees. "This allowed our revenue growth rate to jump to the 35% to 45% range and remained at that level through Q1 of this year when we had 41% growth," Olsavsky said during the recent earnings call.

While investors shouldn't expect Amazon to deliver 40% growth rates again, the company could see a return to levels of 20% or more in 2022. 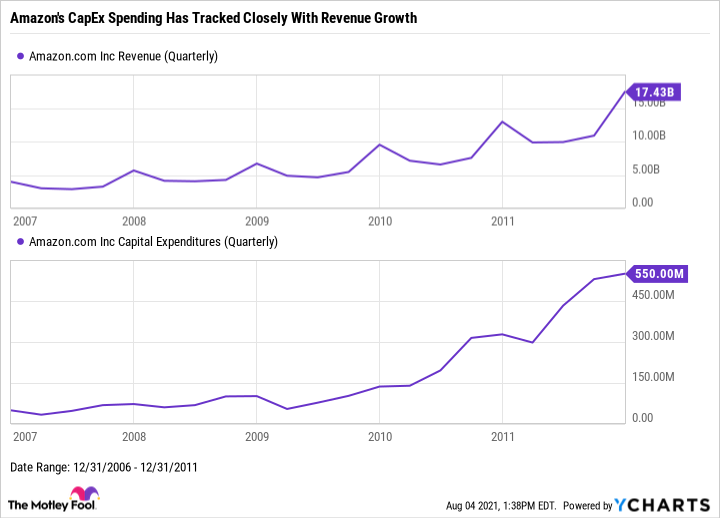 In 2011, Amazon said the increase in capital spending was to drive continued business growth, Amazon Web Services, and additional capacity to support fulfillment operations. You could take that statement from 10 years ago and plug it into the latest earnings call. Those are the same key areas the company continues to invest in going forward.

Given Amazon's record of driving high returns on incremental capital spending, investors should consider adding shares of this leading growth stock during the post-earnings decline.