The stock dropped roughly $40 per share over the course of the month.

Shares of CRISPR Therapeutics (CRSP -0.86%) lost 25.2% of their value in July, according to data from S&P Global Intelligence. The stock was at $161.22 when the market opened on July 1, and fell to $121.02 by the time it closed on Friday, July 30. The stock lost ground on all but a handful of days during the month, a slow, but steady, slide downward.

There really wasn't any huge breaking news that hurt the stock, but it was at the tip of a trend away from high-valuation stocks with growth potential into value stocks throughout the month. The company, which works on gene-editing therapies, doesn't have any consistent revenue yet. 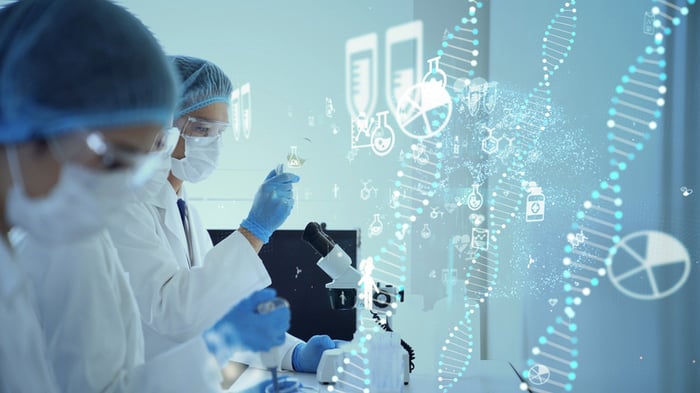 The move downward in July reflects that there are still plenty of questions when the company will bring its lead gene-editing therapy, CTX001, to market. One potential use of CTX001 is to treat two serious genetic blood disorders: transfusion-dependent beta thalassemia (TDT) and severe sickle cell disease (SCD). CTX001 is known as an autologous therapy because a patient's own cells are edited and used for the treatment with CTX001, turning on a fetal form of hemoglobin in the patients' bodies to correct genetic disorders.

So far, the early trials for CTX001 seem to be proceeding well. On June 11, CRISPR and Vertex Pharmaceuticals (VRTX 0.33%) announced new data regarding 22 patients being treated with CTX001. They said that after at least three months and in some cases as long as a year, patients treated with it continued to show a sustained response to the therapy.

It found that 15 of those patients with TDT were still transfusion-free and that the remaining seven patients of the group with SCD had been free of the painful side effects of SCD, known as vaso-occlusive crises.

The biotech stock has climbed in August, mostly due to positive news coming out of the company's second-quarter report on July 29.

The company said it had $2.5 billion in cash, compared to $1.8 billion in the previous quarter, thanks primarily to an upfront payment of $900 million from Vertex, as part of a collaboration agreement regarding the development of CTX001. That also meant CRISPR had positive net income in the quarter of $759.2 million, compared to a net loss of $79.7 million, year over year.

There's also the possibility that CRISPR, because of its potential, could be purchased by a large pharmaceutical company, which would drive up the stock. In the meantime, it continues to have plenty of potential for long-term investors, as long as they are prepared for short-term volatility.