Shares of Activision Blizzard (ATVI -0.29%) bounced higher after the company delivered second-quarter results that exceeded management's guidance as well as analysts' estimates. Bookings came in slightly above estimates at $1.92 billion, but adjusted earnings per share (EPS) smashed expectations, coming in 58% higher than the consensus figure at $1.20.

Activision Blizzard has been under pressure in recent weeks after a California state regulator filed a lawsuit alleging misconduct within the company, specifically regarding issues of harassment and discrimination toward female employees. The company has since appointed new leadership at the Blizzard studio.

As you can imagine, management had plenty to discuss on the earnings call. Here are three quotes that cover recent leadership changes and future growth opportunities. 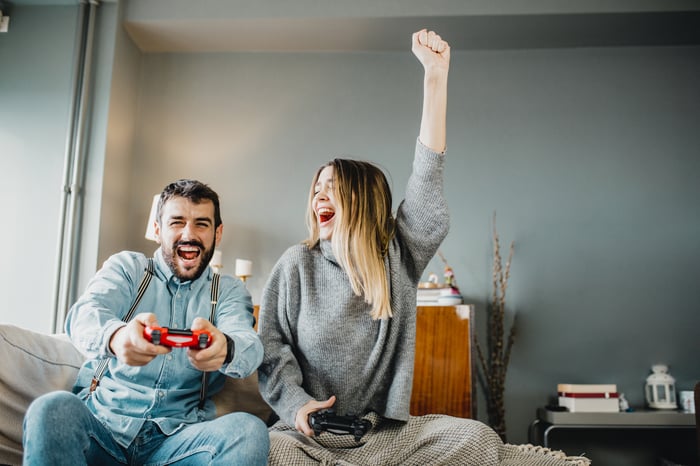 The news of the lawsuit was a punch in the gut for the company. CEO Bobby Kotick released a letter to all employees on July 27, stating that management's initial responses to the complaints against the company were "tone deaf" and committed to taking swift action to correct the issues raised.

At the beginning of the earnings call, Kotick got right to the issue: "I want to start by making it clear to everyone that there is no place at our company where discrimination, harassment, or unequal treatment of any kind will be tolerated, nowhere."

On Aug. 3, the company announced that former head of Blizzard Entertainment, J. Allen Brack, was leaving "to pursue new opportunities." In Brack's place, the company appointed Blizzard's executive vice president of development, Jen Oneal, to step in as co-leader of the segment. Serving alongside Oneal will be Blizzard executive vice president and general manager of platform and technology Mike Ybarra.

The changes at Blizzard show the company is trying to take swift action now to address the various complaints, but from an investor's point of view, it does raise an additional concern about continuity in execution, especially with several new titles currently in development that will be crucial to the company's future.

Oneal spoke to both issues with this statement: "When we come together, we make some of the best games in the industry, and we're now seeing that energy applied to our culture, which is equally important."

On the call, management reported that Diablo 2: Resurrected is scheduled to launch on Sept. 23 for PC and consoles. The mobile version of Diablo: Immortal is continuing to progress through testing, but the game will be delayed until the first half of 2022. Management also said the teams are making "strong progress" on Diablo IV and Overwatch 2, with the latter passing "an important milestone" in recent weeks.

Another highlight for the quarter came from mobile bookings, which exceeded an annual rate of $3 billion for the first time. Call of Duty: Mobile is contributing to that success with the title expected to reach $1 billion in consumer spending this year.

CFO Armin Zerza commented, "The mobile platform delivered more than 40% of total net bookings and is a key strategic priority for us as we expand each of our key franchises to mobile in the coming years."

Activision Blizzard raised its full-year guidance and now expects bookings and adjusted EPS to come in at $8.65 billion and $3.54, respectively. This would represent slightly improved bookings and about 10% earnings growth over 2020.

The company is well positioned to benefit from the long-term trend of more people playing video games. The stock is a better value after the recent pullback too as shares have declined 20% from their high reached earlier this year. With negative headlines still swirling around the business, this might be a timely opportunity to buy shares ahead of the new Diablo and Call of Duty titles coming this fall.

Should You Buy Actvision Blizzard Stock Before the Microsoft Buyout Is Complete?
366%