News of labor shortages is seemingly everywhere. The coronavirus pandemic and the forced temporary business shutdowns it caused led employers to let go of millions of workers in the U.S. Now, as nearly 350 million vaccine doses have been administered, businesses are opening again.

That reopening has created an overwhelming demand for workers. At the same time, there are fewer workers to attract. Some workers are less enthusiastic about returning due to several factors: a continued fear of contracting COVID-19 while working, a lack of child care options while kids are home from school, and the temporary continuation of generous unemployment benefits.

All this has combined to create a situation where companies offering less stressful, more flexible jobs are gaining an advantage against others. 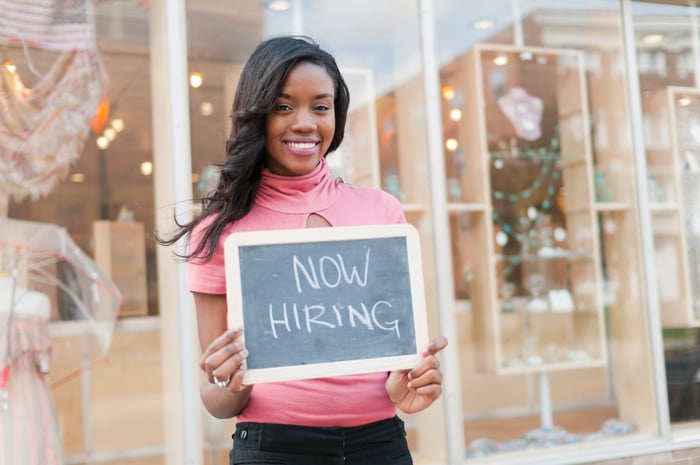 Let's consider four companies currently in hiring mode at the moment: Amazon (AMZN -3.31%), Disney (DIS -3.52%), Chipotle (CMG -2.13%), and DoorDash (DASH -3.55%). Each is looking for and hiring workers. However, each is offering somewhat different working conditions.

For instance, working at a distribution warehouse for e-commerce giant Amazon has been described as very difficult by some employees there. The workers are held to high standards and are judged on how productive they are while on the clock. One does not have to look too far to find troubling stories about working conditions at Amazon warehouses. In Amazon's defense, company management said it is spending time and resources on improving conditions for employees.

Similarly, restaurant chain Chipotle workers in some locations have found employment to be more stressful of late. They work in a fast-paced environment where customers expect speed in food production. Understaffing has led to some workers spending long hours on their feet and their work is made further difficult in localities where worker mask mandates are still in place. It's not surprising Chipotle management announced hourly wages increases in the hopes of attracting and maintain adequate staff levels during these challenging times.

In contrast, food delivery service DoorDash offers its contract workers more flexibility, more freedom, and potentially more enjoyable working conditions. Dashers get to set their own schedule, working as much or as little as they want, and they have less pressure when it comes to management observing every move they make.

Working at a Disney theme park does involve customer service and it can be trying for some in some situations, but it also has some unique perks. Employees get to spend their working days in a place people willingly pay hundreds (even thousands) of dollars to get into. Further, the theme parks offer varying roles to better fit individual worker preferences. And the nature of the work means many of these employees end up being decently compensated for what they do in order to ensure the position is filled.

If a potential employee's geographic location gave them the option to work for DoorDash or Disney, all else being equal, it would seem they would be less inclined to choose Amazon or Chipotle. It follows then that, to entice workers, the latter companies would have to provide greater incentives in wages or otherwise.

At least in the near term, with the imbalance between jobs and workers in favor of workers, companies that offer better-quality jobs will be at an advantage. Others will have to pay more to remain competitive.

Investors should keep things like this in mind when thinking about reopening economies and what potential effect they have on stock prices. Some businesses may have surging demand for their products or services as they reopen but may not fulfill that demand. Or, to maintain their standards for service, they may need to increase wages as Amazon and Chipotle have already done, which will take a bite out of profits. Either way, they will be at a disadvantage as long as the imbalance remains.