Please ensure Javascript is enabled for purposes of website accessibility
Log In Help Join The Motley Fool
Free Article Join Over 1 Million Premium Members And Get More In-Depth Stock Guidance and Research
By Adam Levine-Weinberg – Aug 10, 2021 at 7:25AM

Kohl's and Sephora have officially launched their retail partnership, and it's great news for the department store chain.

In late 2020, Kohl's (KSS -0.25%) struck a game-changing partnership with Sephora. The agreement called for the department store chain to open Sephora-branded beauty shops in most of its stores and create a co-branded online beauty assortment.

A little over a week ago, Kohl's launched its Sephora e-commerce shop. And on Friday, it opened the first handful of Sephora shops within its brick-and-mortar stores. This could mark a big turning point for Kohl's fortunes.

Kohl's isn't the first department store to team up with Sephora. JCPenney has operated Sephora shops inside many of its stores for over a decade. But the beauty retailer -- owned by LVMH Moet Hennessy Louis Vuitton -- got into a legal squabble with JCPenney last year, ahead of the latter's bankruptcy filing. The ailing department store alleged that Sephora had threatened to terminate their agreement ahead of schedule.

While Sephora claimed that it remained committed to its partnership with JCPenney, it's clear that it was looking for a better alternative. JCPenney's falling sales and store traffic, its subpar reputation, and its mall-focused store footprint have made it an undesirable partner for Sephora.

This led to the announcement last December of a new retail partnership between Sephora and Kohl's. By 2023, the two companies plan to open at least 850 Sephora shops inside Kohl's stores. Thanks to Kohl's largely off-mall real estate, these shops will complement Sephora's company-operated mall-based stores very nicely. 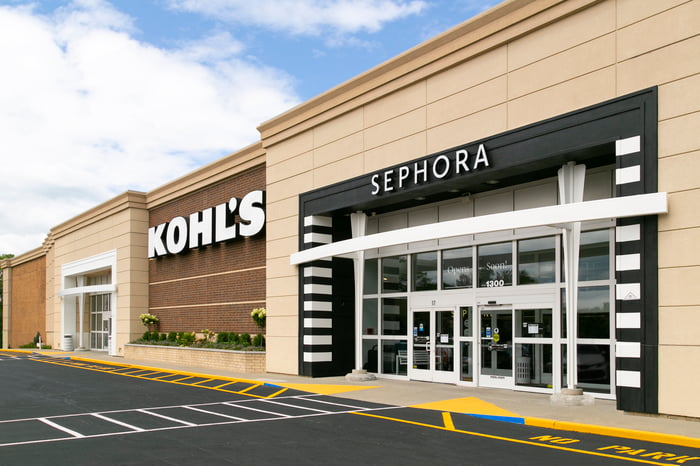 For now, JCPenney continues to operate Sephora shops in most of its stores. However, they will close next year. JCPenney is working on a new beauty experience to replace them.

Kohl's launched its Sephora e-commerce shop at the beginning of August. The department store giant is selling an expanded assortment of Sephora beauty products online compared to what it will display in its stores, and it offers free shipping to any of its stores for online orders. At stores that feature Sephora boutiques, Kohl's is promising pickup in one hour or less for online orders of in-stock merchandise.

Last Friday, Kohl's began the rollout of its new brick-and-mortar Sephora shops. Just four of the shops opened in the first wave last week. More than 70 additional Sephora shops will open on Aug. 20, though. By year-end, Kohl's plans to have about 200 Sephora shops operating.

Each Sephora shop inside Kohl's will occupy over 2,500 square feet and feature approximately 125 brands. While the "beauty advisors" who staff the shops work for Kohl's, they have been specially trained by Sephora. 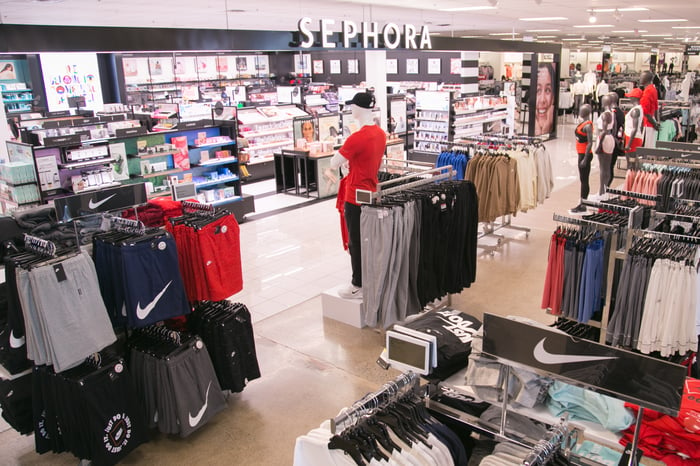 The beginning of a new era for Kohl's

In recent years, Kohl's has lagged rivals in the beauty category, despite enhanced investments in this area. Thus, the nationwide launch of Sephora on Kohl's e-commerce platform should help drive an inflection in the department store's beauty sales.

That said, Kohl's will only have Sephora shops in a small fraction of its stores in the near term. As the brick-and-mortar footprint expands over the next two years, it should drive significant incremental sales growth. Additionally, the Sephora shops will bring new customers into Kohl's stores, giving the company a great opportunity to encourage cross-shopping in other departments.

Even before the pandemic, Kohl's was struggling to grow. In 2019, sales decreased 1.5%, causing net income to plunge 17% year over year. However, Kohls' is well positioned to turn things around now. Many competitors closed stores during the pandemic, putting market share up for grabs. Recent brand launches like Lands' End and Eddie Bauer could aid Kohl's sales recovery.

Most importantly, the Sephora partnership could add $2 billion to Kohl's top line within a few years. Considering that Kohl's net sales peaked at around $19 billion in 2018, this will likely push the department store chain's top line to new heights. That in turn should drive strong earnings growth over the next few years, giving Kohl's stock a big boost.