Americans are continuing their quest for the open road and wide vistas, and Camping World is there to sell to them.

Continuing to live its financial life in the fast lane, Camping World Holdings (CWH 1.05%) reported consensus-crushing second-quarter 2021 results on Aug. 2. This is the company's fourth consecutive quarter of topping Wall Street earnings per share forecasts. Unlike previous quarters, where investors remained cautious because of the recreational vehicle sector's notorious volatility, the market responded positively to Camping World's success this time around, with its stock closing up 7.16% at the end of the day.

With the new information available, there are at least three important takeaways supporting a bull case for Camping World.

Camping World's second quarter set a slew of fresh records, with revenue jumping 28.3% year over year to an all-time peak of $2.06 billion. In this context, it's worth remembering that the RV sales bull run triggered by COVID-19 lockdowns was already in full swing by Q2 2020, which means the improved results are comparing favorably to an already positive situation for the company last year. At the bottom line, adjusted earnings per share (EPS) skyrocketed 54.9% year over year from $1.62 to $2.51 EPS. Adjusted earnings before interest, taxes, depreciation, and amortization, or EBITDA, set a third record by surging 51% to $333.3 million. 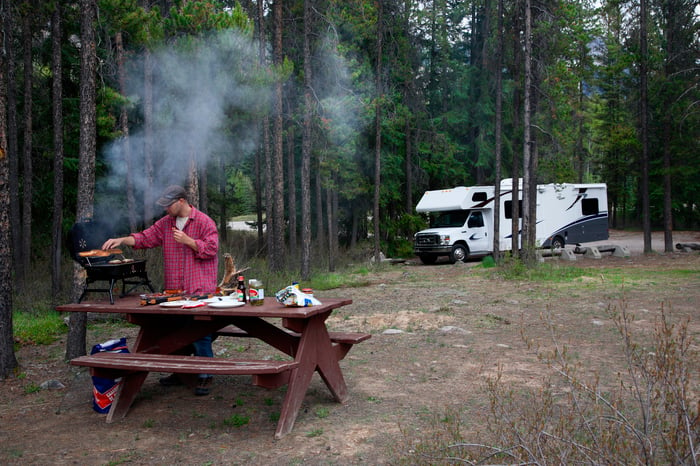 The company also expanded its dealership SuperCenter network by nine locations. As a result, it now has a current or upcoming presence in 46 of the 48 contiguous U.S. states, bringing it closer to its strategic goal of establishing a physical presence in every state.

Significantly, Camping World's gross and net margins both improved. Gross margin increased 644 basis points to 36.9%, while net margin rose from 10.2% to 11.9% year over year. From this, it's possible to infer the company's profitability growth isn't simply due to more sales piling up but also higher efficiency and better margins on individual sales.

Pursuing better margins is a strategic goal for Camping World, which the RV seller appears to be executing on with considerable success. During the Q2 earnings conference call, CEO Marcus Lemonis highlighted this growth factor when he said "maximizing margin" is "a golden ticket that we've been given, and it's our obligation to seize that."

2. It's boosting the quality of its stocks and balance sheet

Not content with higher sales, Camping World appears to be rolling at least some of its record gains back into internal improvements and investments. It continued its share buyback program, reducing dilution and increasing the future EPS of outstanding stock still in investors' hands. During Q2, it repurchased $45.5 million in common stock, amounting to roughly 1.15 million shares.

Even more recently, in the first days of August, the company earmarked more funds for stock repurchases, adding $125 million to the buyback program. This sum is in addition to the $33 million remaining from an earlier authorization. Lemonis remarked, "the increased stock repurchase program reflects the confidence our senior management team" has "in the Company's future performance and ability to generate strong cash flow." The actual repurchases will occur on an opportunistic basis rather than a set schedule.

In terms of debt, Camping World has also improved its balance sheet health. Its current leverage is approximately 1.14 times adjusted EBITDA, according to Lemonis, and it continues paying down its long-term debt. It also refinanced its credit facilities, cutting margin rate by 25 basis points and gaining more time to repay with a renegotiated 2028 term. It ended the quarter with about 15% more cash than at the end of Q2 2020. Overall, the company appears to have a lean balance sheet with good cash flow and reserves to complement its program of buying back stocks to give its investors more value.

The market continues to be very favorable for Camping World and the RV sector in general. Outdoor lifestyle stocks are thriving as people seek the wide open spaces of the North American continent. With many countries continuing air travel restrictions, and the previously highly popular cruise ship vacations still largely off-limits, vacationing almost appears to be returning to pre-jetliner patterns, with people mostly getting their relaxation at regional camping areas or national parks.

Even beyond the pandemic, however, the RV trend may have gained momentum of its own as more people, and many from younger generations, become invested in the lifestyle. Data from the RV Industry Association shows all-time highs for June RV shipments (the latest month with available data). Shipments topped the previous record June high in 2017 by 7% and last June by 23.5%, with 50,706 units shipped. The second quarter as a whole has the most shipments for any quarter since records started being kept decades ago.

Camping World raised its guidance against this backdrop of record sales. It now predicts $810 million adjusted EBITDA for the full fiscal year 2021, up 5.2% from its May forecast. Lemonis declined to guide for 2022 results during the earnings conference call, but said Camping World's executives are "excited" about the future.

He also teased that, related to electric RVs, on "the morning of September 15, we will unveil a product offering that the outdoor and recreational space has never seen before, all in one place." With a potential new offering appealing to the electrification craze upcoming, strong momentum, a favorable market, and balance sheet improvements, it looks as though Camping World will likely be a good investment among consumer discretionary stocks through this year and likely into the longer term.