Please ensure Javascript is enabled for purposes of website accessibility
Log In Help Join The Motley Fool
Free Article Join Over 1 Million Premium Members And Get More In-Depth Stock Guidance and Research
By Keith Speights – Aug 12, 2021 at 5:55AM

All of them are more important than market cap -- another front where Canopy tops Tilray.

There are two top players in the Canadian cannabis market. And then there's the rest of the pack. Canopy Growth (CGC 4.57%) has reigned throughout much of the last few years as the biggest Canadian cannabis producer based on market cap. But thanks to its merger with Aphria earlier this year, Tilray (TLRY 1.85%) now runs neck and neck with Canopy.

Tilray has also been the much bigger winner this year in terms of stock performance. Its shares have skyrocketed more than 70%. Meanwhile, Canopy Growth stock has floundered, falling more than 20% year to date. 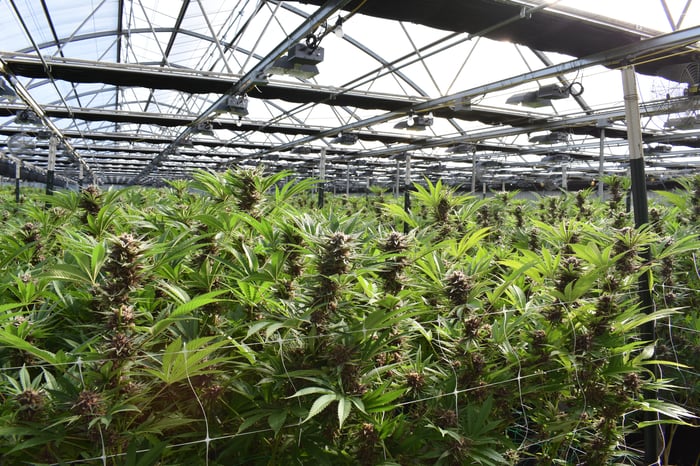 When Aphria and Tilray announced plans to merge back in December 2020, the companies claimed that they would together have the largest market share in the Canadian recreational adult-use cannabis market. However, the Aphria-Tilray merger closed in May, yet the combined entity doesn't rank No. 1 in said market.

In Canopy Growth's fiscal 2022 Q1 conference call last week, CEO David Klein stated, "Amid a very competitive environment, we maintained market share leadership with 15.2% share of the tracked provinces in Q1 2021." Canopy held that top spot, thanks to its own acquisitions of Ace Valley and Supreme Cannabis.

Tilray is the biggest moneymaker in the total Canadian cannabis market, including medical and recreational sales. It has also been gaining overall market share each month since April. For now, though, there's one top dog in the Canadian recreational market -- and it's Canopy Growth, not Tilray.

If cash is king, then Canopy Growth definitely sits on the cannabis throne. The company's cash and short-term investments totaled 2.1 billion in Canadian dollars (close to $1.7 billion) as of June 30, 2021.

Tilray's cash stockpile doesn't come close to that that level. The company reported cash and cash equivalents of $488.5 million as of May 31, 2021.

Neither one of these cannabis operators is generating real positive earnings right now. The profits that both Canopy Growth and Tilray posted in their latest quarters were due to changes in the fair value of derivative liabilities. Basically, both marijuana stocks fell, which gave them other income on paper related to a change in the value of warrants for Canopy and convertible debentures for Tilray.

Because they're not truly profitable, both Canopy and Tilray need cash for operations and for any expansion plans. Canopy is clearly in the stronger position on this front.

The last way that Canopy Growth beats Tilray is arguably the most important. Both of these companies anxiously await the opportunity to enter the U.S. cannabis market. Canopy is in a better position to do so than its competitor.

Canopy has a growing CBD business in the U.S. Its Martha Stewart CBD brand now ranks No. 3 in the U.S., and Canopy's Quatreau CBD-infused beverages have been launched in seven states so far.

Tilray's Simon said in the company's latest quarterly update that Tilray will pursue mergers or acquisitions of U.S. multistate operators when cannabis is legalized in the U.S. That makes sense. However, Canopy is already set and ready to go now, while Tilray is waiting.