After the Olympics, Peacock may never recover.

The streaming wars are likely to end with a small handful of streaming stocks controlling the content distribution of most TV shows, movies, and live sports around the world. To win, companies need to build scale and create a growth flywheel between content and users that eventually becomes sustainable and profitable.

For example, Netflix (NFLX 0.06%) spent a decade building its streaming business. With 209 million paid subscribers around the world, the company has already spent $8 billion on content in 2021. It's safe to say the flywheel is working wonders for Netflix. Disney (DIS -1.43%) didn't get into streaming in earnest until November 2019 when Disney+ launched, but it leveraged nearly a century of content and used a low initial price of $6.99 per month and new hit titles like The Mandalorian and Loki to get customers signing up. It now has over 100 million subscribers and is raising prices to $7.99 a month as it grows its streaming-only library of content, so it's likely Disney will be one of the companies left standing in streaming.

Comcast (CMCSA -0.63%) and its NBC Universal business would like to join the streaming wars with the Peacock service. The Olympics were supposed to be a jumping-off point with some content going to Peacock and the service being advertised every chance possible on NBC and affiliated cable networks. But once again, Comcast has blown a golden opportunity to turn the Olympics into a win for the company and has shown just how incoherent its streaming strategy seems to be. 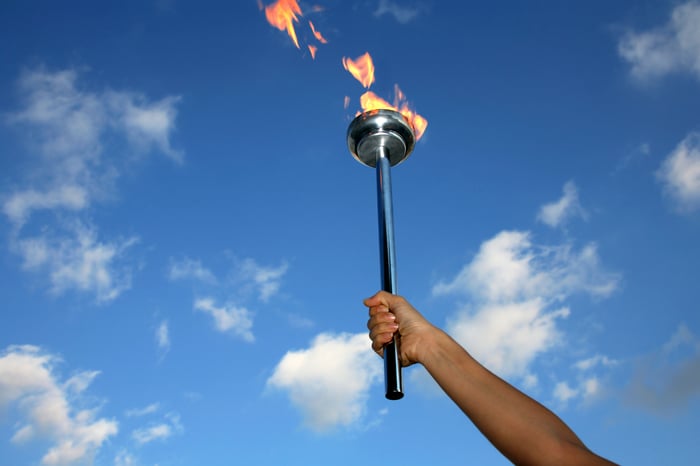 It's hard to state how much Comcast needed the Olympics to establish Peacock as a real streaming player. Comcast says Peacock has 42 million subscribers, but in the second quarter of 2021, Peacock reported $122 million of revenue and an adjusted EBITDA loss of $363 million, so the service is clearly burning money.

There are free subscription options up to a $9.99 per month option, so if we use $5 per month as an average price (the lowest-cost option), that means there are at most 8.1 million customers paying for Peacock in the quarter. That's incredibly underwhelming compared to Netflix and Disney's paid subscriber count.

The Olympics was a perfect time to get people to sign up for initial trials for Peacock. Building the customer list is critical to a streaming service, and what better time than the Olympics to build the list? This would also give Peacock a chance to show it has compelling content that will attract more users in the future, starting with the flywheel I talked about above. Disney is building dozens of shows just for Disney+, and Netflix is spending billions on content. Besides the Olympics, Peacock is using The Boss Baby: Family Business and Dr. Death as its featured content, which seems underwhelming versus the competition.

As far as the experience with the Olympics on Peacock goes, it seems like Comcast may have angered more people than it impressed. Not every event was streamed live, some events weren't available on-demand immediately after airing, and there was even dead space on replays where ads would be on the live feed. We don't know final subscriber numbers, but it seems like Peacock was more of a mess than anything during the Olympics.

Failing to go all-in on the Olympics

NBC seems to have tried to balance the legacy linear TV channels and the streaming option and failed to please anyone in the process. If the goal was to get people to Peacock, it needed to go all-in, pushing nearly all of its content there and forcing people to sign up or miss the Olympics. Instead, there were at least four channels with Olympics content on any given night, plus a web streaming option, plus Peacock. For a casual viewer like me, where's the incentive to sign up for Peacock when there are other options?

As nice as it would have been to get every event on-demand, I have a YouTube TV subscription that allows me to record most events and watch them at my pleasure. The few that were "spoiled" for me on Twitter or through other notifications weren't a huge deal at the end of the day. And my desire to see full basketball games or the gymnastics finals live wasn't reason enough to sign up for another streaming service. But if the Olympics experience on linear TV was so limited that I had to sign up for Peacock, and everything was available on-demand, what choice would I have?

The problem is that NBC was trying to keep multiple stations full of content and advertisements while also trying to promote streaming. But it had its hands in both pots and never pushed all-in on the streaming side. So outside of the diehards for an event, what incentive was there to download Peacock, enter your credit card and personal information, and learn how to use yet another streaming service?

Botching the Olympics once again

It's a theme every four years to complain about the Olympics coverage, and that's no different in 2021. But in Comcast's case, I think this is a missed opportunity to force millions of sports fans to sign up for Peacock. Instead, the company gave people enough to watch on NBC and cable channels to get a fairly reasonable Olympic experience that was just a little delayed and underwhelming. That was good enough for most people.

What I worry about s that Peacock may never be able to recover. The service is burning hundreds of millions of dollars per year, and by the next summer games in 2024 (since the Winter Olympics isn't likely to be a game-changer for Peacock), the company may have already lost the streaming wars to rivals with more subscribers and better content. This is a lost opportunity for Comcast.

Stocks I Love From Companies I Hate
376%