Cassava Sciences (SAVA 3.81%) is one of the largest gainers in the market in 2021. It's August and the stock is already up 1,700%. That's an amazing return for Fools who bought in January. What is driving the stock so high? Can it keep going?

Motley Fool analyst and editor Olivia Zitkus and Fool.com writer Taylor Carmichael have a virtual chat about this high-flying stock. This Fool Live discussion was recorded on July 30. 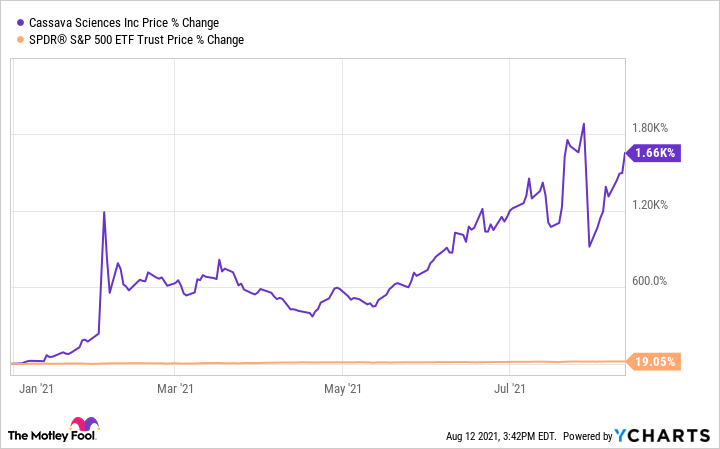 10 stocks we like better than Cassava Sciences, Inc.
When our award-winning analyst team has a stock tip, it can pay to listen. After all, the newsletter they have run for over a decade, Motley Fool Stock Advisor, has tripled the market.*

They just revealed what they believe are the ten best stocks for investors to buy right now... and Cassava Sciences, Inc. wasn't one of them! That's right -- they think these 10 stocks are even better buys.

Olivia Zitkus: On that note, I would like to turn to another Alzheimer's disease drug developer, which I know you've written a good bit about lately, Cassava Sciences, which is up, I think over 1,200% year to date. Yesterday, it was up 1,800% year to date and now it's taken a bit of a hit.

Taylor Carmichael: Yeah. Cassava is very interesting. I actually bought some shares in Cassava earlier this year because investigating the Biogen drug and just seeing how huge this market opportunity is. Alzheimer's is $100 billion market opportunity and there are no good treatments for Alzheimer's. It has been like a graveyard for Big Pharma for decades. There are no good treatments, people are still getting worse, there's still a significant decline. Cassava a year ago was a micro-cap. At the beginning of the year, they were a small cap, they were about $200 million, $300 million. They reported positive Phase II data. First off, last year, they reported bad Phase II data and it turns out, according to the company, the lab screwed up, the original lab that they used and they just messed up the data. They had a university look at the data and the university said this is really good data and so they rereleased the data in the fall and they said, our Phase II data is excellent actually. The stock cratered when the first report came out and when the second report came out, it slowly came back. It came back in several months and then in February, the company released from a different study, also Phase II, they started reporting that patients were actually getting better on their drug. It wasn't just slowing the decline, that they were seeing cognitive improvement on the scale and so that was notable. All the biomarkers were up, that's good.

Taylor Carmichael: But what you really want to see is your patients getting better. And they reported that and that sent the stock skyrocketing. It hit at one point, literally, the day after they issued the report, it went to $120 or $130, then it slowly pulled back and then when the Biogen (NASDAQ:BIIB) news came out, it came back up again and it's been really volatile. This is the same study that was back in February, and now they just issued another update. Their data is even better than it was in February.

Taylor Carmichael: That is even better. The company is very happy with their data. The market is not, the market killed them and I'm just like, wow. It's just been a very volatile stock. Again, this is Phase II, so it's very early. The market often has trouble valuing companies that are in flux and you're trying to figure out, is this good data is this bad data?

Olivia Zitkus: Yeah. This is a clinical study being funded by the NIH (National Institute of Health) now. Just for background, the drug is called simufilam. The big thing about this drug is that it improves cognition points on that benchmark test you were mentioning, which no other Alzheimer's drug has been proven to actually improve cognition of mild to severe Alzheimer's patients. For an 18 percent mean improvement from benchmark to month nine, that's huge. It's surprising that over the past 24 hours, the stock sank 25 percent yesterday.

Taylor Carmichael: It's been incredibly volatile. We just bought it a month ago and it's still up for us actually, so that's how much it went up, a huge amount up until the study and then it's cratered in the last few days. Who knows what it's going to do on Monday? As I said, the news is actually good. One caveat, it's an open-label study, so there's no placebo. There is such a thing that's called a placebo effect. I don't know how it all works, but you want to have placebo in your testing.

Taylor Carmichael: To give your data. I think that's one reason people are a little skeptical of this data. Other reason, again, Alzheimer's has been a graveyard for pharmaceutical companies for a long time.

Next Video: Cassava Sciences vs. Biogen