The most important number to consider may not even be part of its financials this quarter.

Cannabis producer Planet 13 (PLNH.F -1.46%) has been one of the sector's hottest buys over the past 12 months, rising more than 110% in value while the Horizons Marijuana Life Sciences ETF increased by just 37%. Planet 13 has done an excellent job growing its Las Vegas SuperStore, making it not only a solid source of revenue growth for the company but a popular tourist attraction on the Las Vegas Strip as well.

However, the stock isn't without its risks, and Planet 13's upcoming earnings report (which could come toward the end of this month) may answer some big questions. Investors will want to pay close attention, because there's a lot on the line this quarter that may determine how much of a premium the stock will command moving forward. 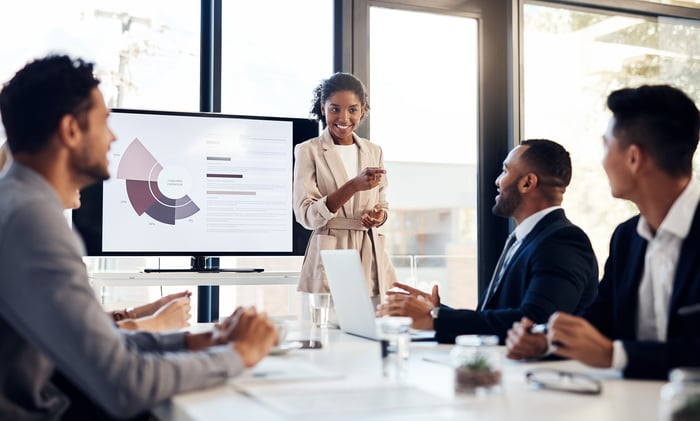 All eyes on Santa Ana

Planet 13's Las Vegas SuperStore is a hit, to put it mildly. The company has continued to post record sales numbers; revenue hit $11.9 million in July, with the vast majority coming from the Strip location. During the month, the company's newest location in Santa Ana, Calif., contributed approximately $800,000. The store had its grand opening on July 1 and marks Planet 13's entry into the California market.

Although that means the location won't provide any revenue for the second quarter and period ending June 30, investors will definitely want to look for an update on Santa Ana sales in the company's earnings release. The California location is still in its infancy, but if it fails to become the hot success story that the Las Vegas SuperStore has proven to be, some of the excitement around the stock could dissipate. Planet 13's success in Las Vegas may not necessarily translate into success in California, where its new dispensary is a 10-minute drive not from casinos but from Disneyland.

It's difficult to gauge just how strong the $800,000 in monthly revenue is out of the gate, but investors will be expecting a whole lot more in the future. At 55,000 square feet, the new dispensary is close to half the size of the mammoth Las Vegas-based store. However, the California pot market is the largest in the world, worth more than $4 billion (Nevada is closer to about $700 million in sales); investors may be expecting Santa Ana to contribute more than half of the revenue that the Las Vegas superstore is generating, given that significantly larger market. It will undoubtedly take time, but early results and growth numbers could offer hints as to how the business is performing.

The reason Santa Ana is important is that right now, investors are paying a significant premium for shares of Planet 13. The stock is trading at a higher forward price-to-sales multiple than some of the bigger names in the industry: 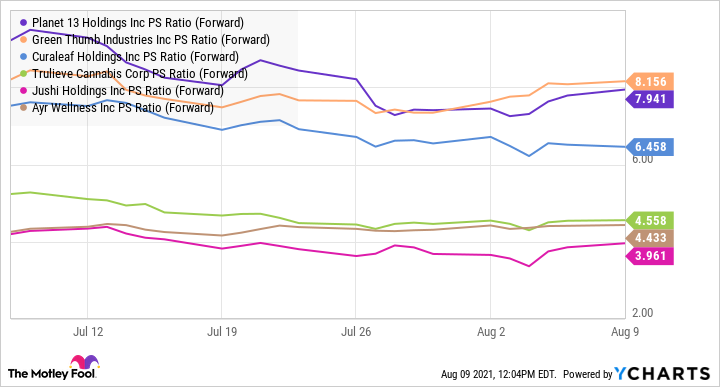 For Planet 13 to justify such a high premium, it's going to need to show that its business model can work well outside of just Nevada. This is especially important since the company has won a license for a recreational dispensary in Chicago this month; this could be the site of another SuperStore location.

The success of Planet 13's growth strategy has up until now been focused on just one market. With potential expansion into a third state in the near future, the company faces some big tests. And investors won't want to wait around for a repeat of the success it has enjoyed in Nevada. If it underwhelms in Santa Ana, concerns may mount that similar struggles could happen in Chicago. But if it is able to post strong numbers in its newest dispensary, then the sky could be the limit for Planet 13's stock.

Planet 13 has tremendous potential over the long haul. The company has strategically selected locations that it believes will facilitate revenue growth. But on the flip side, its dispensaries haven't been small, and that puts a lot of pressure on the business to perform and generate impressive sales numbers. Otherwise, costs could quickly chip away at the company's margins and bottom line.

For the quarter ending March 31, the company's adjusted earnings before interest, taxes, depreciation, and amortization (EBITDA) came in at $5.2 million, more than double the prior-year profit of $2.4 million. A strong bottom line is another reason why the stock is an above-average cannabis investment.

However, the high revenue multiple is the main reason I haven't invested in the stock today; Planet 13 simply hasn't proven that its business is worth an inflated premium. If it can prove that it has found a recipe for success that can work in multiple markets and states, that could very well change. But as of now, that isn't the case. The safest route for investors is to wait to see how Santa Ana is doing and how fast sales are growing there before buying the stock.

David Jagielski has no position in any of the stocks mentioned. The Motley Fool owns shares of and recommends Ayr Wellness, Green Thumb Industries, Jushi Holdings, Planet 13 Holdings Inc., and Trulieve Cannabis Corp. The Motley Fool has a disclosure policy.