Shares of Cano Health (NYSE: CANO) climbed more than 10% on Thursday. The stock closed at $10.66 on Wednesday, opened at $11.50 on Thursday and rose to as high as $11.89 in early trading. The stock only began trading on the New York Stock Exchange on June 4 through a merger with a special purpose acquisition company (SPAC) sponsored by billionaire Barry Sternlicht, the chairman of Starwood Capital Group Management.

You can thank some impressive second-quarter numbers, which were released early Thursday, for the spike. Cano Health operates 108 primary care facilities for seniors in Florida, Texas, Nevada, and Puerto Rico and said it has plans to also be in New Jersey, New York, New Mexico, and two other states to be announced by the end of the year. 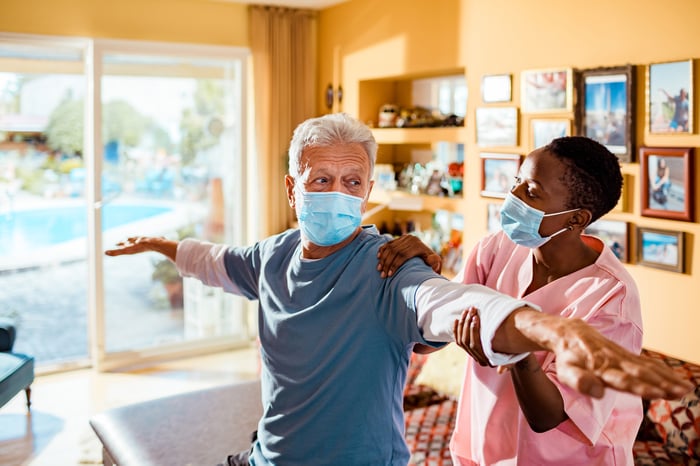 The company reported revenue of $393.2 million, an increase of 130% year over year, which Cano credited to its membership growth and recent acquisitions. It also listed net income of $4.9 million, compared to a loss of $11 million in the same period in 2020 and an improvement from the $10.5 million in lost in the first quarter.

Cano said in the second-quarter report that its membership grew to 208,000, up 110% year over year, making it the sixth quarter in the past seven it has seen triple-digit year-over-year increases.

Investors will watch to see if Cano can continue to grow membership and revenue. It has said it expects to have 215,000 members and yearly revenue this year of $1.6 billion. A key concern is the uptick in COVID-19 cases, particularly in the company's home state of Florida. The company said its membership mortality rate is 50% lower than the senior population in Florida, but a continued rise could impact the company's business. As of Aug. 9, the company said its seven-day average of COVID-19 cases among its members was 14.3, compared to the company's peak average of 24 in January.

The healthcare clinic company has been growing through a spate of acquisitions, including a $300 million purchase of Doctor's Medical Center and its 18 medical centers in South Florida in July. This should help the company's revenue numbers, but the company will also need to keep its debt in check.