Please ensure Javascript is enabled for purposes of website accessibility
Log In Help Join The Motley Fool
Free Article Join Over 1 Million Premium Members And Get More In-Depth Stock Guidance and Research
By Jeremy Bowman – Aug 13, 2021 at 8:13AM

After a strong first week for the stock, investors could be poised to reap more gains.

It's barely been a week since GXO Logistics (GXO -0.02%) rang the bell at the New York Stock Exchange, marking its separation from XPO Logistics (XPO 0.13%). The decision is already looking like a smart move for the now-bifurcated transportation and logistics powerhouse.

Billed as a way of generating shareholder value, the move separated XPO's contract logistics business, now called GXO, from its transportation operations, which were primarily comprised of its less-than-truckload (LTL) and freight logistics segments. XPO CEO and GXO Chairman Brad Jacobs had long argued that XPO was trading at a "conglomerate discount," meaning its business was difficult to value because it had no publicly traded peers and had become too complex for investors to evaluate.

Splitting off GXO Logistics, which runs nearly 1,000 warehouses around the world for customers such as Apple, Nike, and Nestle helps solve that problem. Investors can compare GXO directly with competitors like Clipper and Kuehne + Nagel, while the current XPO business matches up directly with LTL providers like Old Dominion Freight Line and Saia. 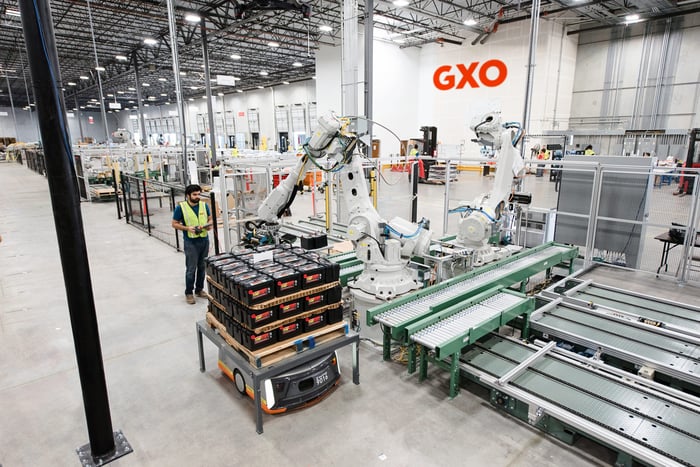 XPO closed July 30, the last day before the split, at $138.69 and opened Monday with the same combined price -- XPO at $80.69 and GXO at $58. Both stocks jumped on opening day and have continued to trade at elevated prices since then. Investors received a share of GXO for every share of XPO that they owned, and the two stocks combined closed at $149.41 on Aug. 9, representing a gain of nearly 10%. GXO shares had surged to as high as $77.48 last week before cooling off.

The two companies brought significant momentum into the spin-off after XPO posted a strong second-quarter earnings report at the end of July. Revenue came in at $5.04 billion, up from $3.5 billion in the lockdown-afflicted quarter a year ago and, even better, increased 19% from Q2 2019, showing the company has fully recovered from the impact of the pandemic.

That result was well ahead of estimates at $4.82. It also beat the consensus on the bottom line with adjusted earnings per share of $1.86, compared to expectations of $1.65.

What's next for GXO

GXO has set a high bar for itself as it becomes an independent company. At its Investor Day conference in July, the company laid out guidance for 2022, including revenue growth of 8%-12% and earnings before interest, taxes, depreciation, and amortization (EBITDA) growth of 14%-20%.

As the biggest publicly traded pure-play company in a fragmented industry, GXO looks poised to make acquisitions, riding a trend of consolidations in the industry. That's also in the company's DNA, as XPO became one of the biggest logistics and transportation companies in the world through a roll-up strategy, making a series of acquisitions to gain scale and expand into new business lines.

Commenting on the company's growth strategy in an interview with The Motley Fool, GXO Chief Investment Officer Mark Manduca said the market is "ripe for consolidation" but that any acquisition had to pass the test of delivering a 28% return on capital as GXO's business currently does. Manduca said that the company would be "very, very selective about the assets" it acquires.

The main opportunity in front of the company is organic growth as it tackles the $130 billion contract-logistics market, and consolidation should also happen naturally as the larger players in the industry, like GXO, get bigger. Manduca noted that 20% of industry contracts are coming up for renewal, giving the company ample opportunity to grab market share.

GXO has big growth ambitions over the long term as it benefits from tailwinds in e-commerce, automation, and outsourcing. In the near term, however, Manduca said the company's objective, after doing a whopping 300-plus investor meetings in the run-up to the spin-off, is to deliver on its guidance and the promises it's made. Promising 14%-20% EBITDA growth is easy; delivering it will require hard work and the company will have to outperform its peers.

Still, as the largest pure-play player in the industry, and with technology like GXO Smart productivity optimization software and more than 3,000 robots and automation systems, GXO looks like the favorite in the sector.

On a valuation basis, as well, the stock still looks well-priced. The company is targeting $600 million-$630 million in adjusted EBITDA this year, meaning it trades at about 12 times that figure, less than many of its peers.

Given the company's valuation and its market opportunity, GXO should be a winner if it can execute on its plan.

Down 30%, This Growth Stock Could Be Set to Soar

How GXO Logistics Is Beating Inflation

What's Next for GXO Logistics After the Clipper Acquisition

This Logistics Leader Could Be the Perfect E-Commerce Stock
356%