If the drug can overcome JAK inhibitor-class concerns, it could capture share in the growing atopic dermatitis market.

On Aug. 4, pharmaceutical giant AbbVie (ABBV 0.17%) reported encouraging results from a phase 3b study of adults with a chronic skin disease known as moderate to severe atopic dermatitis or eczema.

We'll take a look at the results of the study, the challenges facing Rinvoq, and its potential in the atopic dermatitis market if or when the drug is cleared by regulatory agencies to determine how all this will affect AbbVie and its investors. 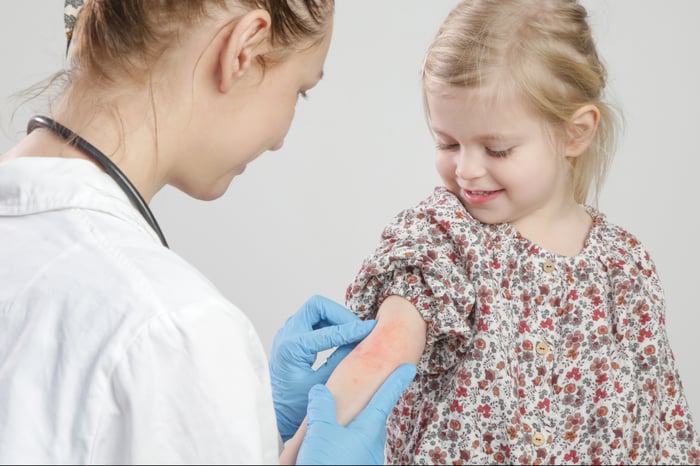 Rinvoq achieved superiority compared to Dupixent for the trial's primary endpoint, meaning the former drug reported a higher number of patients with at least a 75% improvement in the Eczema Area and Severity Index (EASI 75) at week 16, according to AbbVie. Patients receiving 30 mg daily of Rinvoq achieved EASI 75 at a 71% rate at week 16, compared with just 61% of patients who received 300 mg of Dupixent every other week. Better yet, 28% and 61%, respectively, of those receiving Rinvoq achieved clear skin (EASI 100) or almost clear skin (EASI 90) at 16 weeks, compared with 8% and 39%, respectively, for those receiving Dupixent.

AbbVie's vice chairman and president, Mike Severino, indicated in his opening remarks during AbbVie's Q2 2021 earnings call that he believes Rinvoq will be approved for the moderate to severe atopic dermatitis indication in the European Union this month. If and when that happens, AbbVie's greater efficacy could translate into more patients being prescribed the drug over Dupixent.

And that could mean some serious revenue for AbbVie, especially considering that Dupixent was the top-selling atopic dermatitis drug in the world in 2020, generating $8.1 billion in revenue for Sanofi and Regeneron to split. Dupixent also has indications for asthma and chronic rhinosinusitis with nasal polyps, which is in part responsible for its sales.

Although more patients receiving Rinvoq reported serious adverse events during the study than did those receiving Dupixent (2.9% versus 1.2%), AbbVie noted that Rinvoq's safety profile was consistent with observations in previous studies. This means that Rinvoq hasn't turned up any new risks to patients as studies progressed into later stages.

The AAFA estimates that 40% of atopic dermatitis patients in the U.S. suffer from moderate to severe cases, which often result in significant quality-of-life limitations. Even if Rinvoq offers a higher risk of serious adverse events, patients and their doctors may choose it over Dupixent -- the prospect of achieving clear or almost clear skin at a much greater rate with Rinvoq could be seen as clinically worth the risk.

Rinvoq will need to shed the JAK inhibitor-class perception

The major cloud currently hanging over Rinvoq is the increased scrutiny faced by the JAK inhibitor class as a whole. After Pfizer's (PFE -0.35%) post-marketing study of JAK inhibitor Xeljanz (used to treat arthritis and other conditions) discovered serious heart side effects and cancer earlier this year, the U.S. Food and Drug Administration decided to delay decisions on the entire JAK inhibitor drug class for the time being.

Whether Rinvoq's efficacy will be able to overtake fears of major adverse cardiac events and cancer remains to be seen, but Piper Sandler analyst Christopher Raymond noted it is unlikely that "Rinvoq would be painted with the same brush as Xeljanz." This is because the respective rate of cardiovascular and cancer events for Rinvoq  is just 0.4 and 0.8 events for every 100 patient years, per Fierce Pharma. For context, the rate of cardiovascular and cancer events for Xeljanz is considerably higher at 0.98 and 1.13, respectively. Based on this evidence, all indications seem to point to Rinvoq being a safer JAK inhibitor than Xeljanz.

An atopic dermatitis indication could be a blockbuster

Provided that Rinvoq is able to secure regulatory approvals for a moderate to severe atopic dermatitis indication, there is quite a bit of potential for the drug to become a blockbuster this decade. Analysts at research firm Market Data Forecast anticipate that the global atopic dermatitis market will grow by 13.1% annually, from $11.8 billion in sales in 2021 to $21.8 billion by 2026.

Assuming that 40% of atopic dermatitis cases globally are moderate to severe, AbbVie's potential addressable market would grow from $4.7 billion in 2021 to $8.7 billion by 2026.If we assume it can achieve an 8% market share in moderate to severe atopic dermatitis (Dupixent has been able to embed itself firmly in the market, and other companies will likely soon be launching treatments), Rinvoq could be bringing in about $700 million in revenue for this indication by 2026 -- a nice addition to AbbVie's overall revenue, which is projected to hit $55.9 billion in 2021.

Plenty of irons in the fire

Rinvoq isn't the only drug in late-stage clinical trials for which AbbVie expects approvals in the near future. Apart from Rinvoq's phase 3 clinical trials for Crohn's disease and ulcerative colitis, AbbVie and Boehringer Ingelheim's immunology drug Skyrizi, which is not a JAK inhibitor, awaits regulatory approvals for Crohn's disease and psoriatic arthritis next year.

Skyrizi's only approved indication to date, for plaque psoriasis (for which it has 34% patient share), has helped the drug to generate $1.25 billion in the first half of this year alone. Adding possible Crohn's disease and psoriatic arthritis indications by next year would give Skyrizi access to two more multibillion-dollar drug markets, which would undoubtedly add hundreds of millions in annualized revenue in short order for the company.

In the oncology segment, AbbVie believes Venclexta will be approved for myelodysplastic syndrome (MDS) next year. AbbVie also believes its combination of Venclexta with Imbruvica (the latter of which was developed with Johnson & Johnson's (JNJ -0.06%) Janssen Pharmaceuticals) will snag regulatory approvals for the treatment of relapsed or refractory mantle cell lymphoma (R/R MCL) and Stage 1 chronic lymphocytic leukemia (1L CLL) by next year.

Healthcare investors who would like to bet on the efficacy of JAK inibitors -- or who just want a reliable performer for their portfolios -- may find AbbVie a promising prospect today. At just 10.3 times its trailing-12-month free cash flow, AbbVie is trading well below its median historical price to FCF ratio of 13.6, suggesting the company is attractively valued based on its stable operating fundamentals.