A down week was capped off with news that founder Sir Richard Branson sold a large amount of stock.

It was just a month ago when space tourism company Virgin Galactic Holdings (SPCE 3.15%) was celebrating a successful flight to the edge of space with company founder Sir Richard Branson on board. The company's stock ran up ahead of that flight, but much of those gains were lost this week, and part of it is due to activity by Branson himself. For the week, Virgin Galactic shares are down almost 25% as of midday Friday.

Pressure on the shares began when the company reported its second-quarter financial results late last week. The company provided an updated flight plan schedule which included a months-long maintenance period after the next scheduled test flight in late September. That effectively pushes back its plans for its first commercial service flight by close to a year. It previously had targeted early 2022 to begin its commercial service. 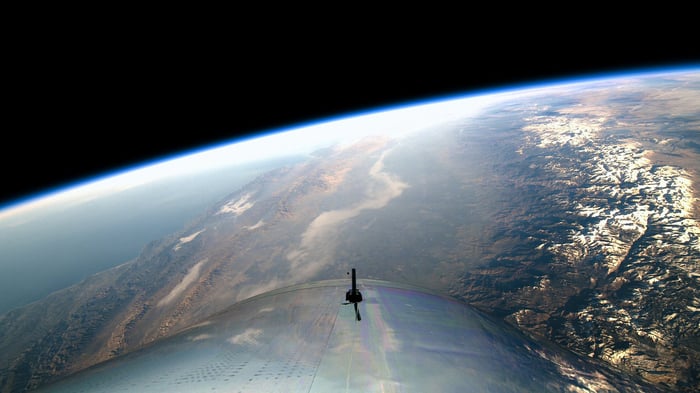 That news brought at least two new stock downgrades from Wall Street analysts. This week, analysts from Morgan Stanley and Credit Suisse both said there is no near-term catalyst now that the company will have a large gap between its next two flights. Virgin Galactic said it is using the "enhancement period" to upgrade the mother aircraft that carries the spacecraft for mid-air launch.

Virgin Galactic shares slid throughout the week on these consistent opinions. And then on Friday, the stock took another hit when a Securities and Exchange Commission filing showed that Branson, through his Virgin Investments group, sold about $300 million worth of stock over the course of several days this week.

The shares were sold at prices ranging from $26 per share to a little more than $32 per share. The stock was recently trading at a little over $25 per share. The Virgin Group noted that it remains the largest single shareholder in Virgin Galactic, and said proceeds from the sale would support Branson's portfolio of global travel and leisure companies.

But for shareholders in Virgin Galactic, the damage has been done this week. Any investor speculating in this sector should have a long-term time horizon, and expect plenty of volatility along the way.