Please ensure Javascript is enabled for purposes of website accessibility
Log In Help Join The Motley Fool
Free Article Join Over 1 Million Premium Members And Get More In-Depth Stock Guidance and Research
By Jim Halley – Aug 16, 2021 at 6:30AM

Whitestone REIT (WSR 1.29%), Stag Industrial (STAG 0.15%), and Realty Income (O 0.51%) are three real estate investment trusts (REITs) that pay a dividend every month. There are reasons for investors to like getting paid monthly, rather than quarterly.

Monthly dividends can help retirees have a more consistent cash flow. Instead of trying to balance out your portfolio by staggering quarterly dividend-paying stocks to achieve consistent income, you can accomplish the same thing by having monthly payers.

There's also the advantage, albeit slight, of having those dividends compound more quickly. It's a lot easier to take that money and reinvest it, if you choose. One last advantage monthly payers have, especially in today's society of immediate gratification, is that it's fun to see money coming in every month. 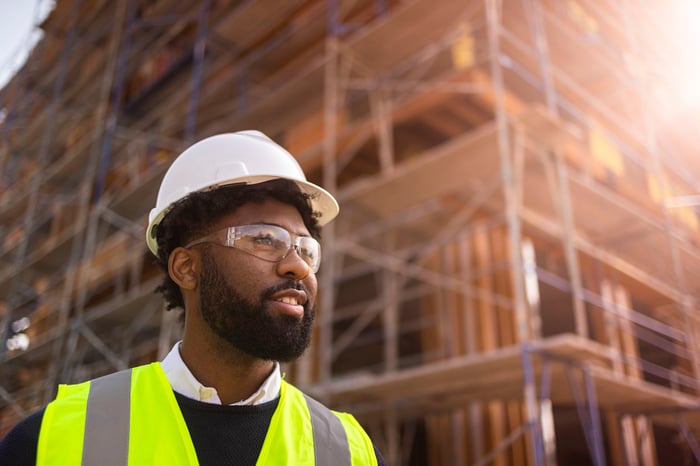 Whitestone is a REIT that focuses on e-commerce-resistant retail properties, clients in wealthy neighborhoods. These include grocery stores, restaurants, and other businesses that provide daily necessities or entertainment, primarily in open-air shopping centers in the Sun Belt.

The company's stock is up more than 15% for the year. It has paid out a monthly dividend for 133 consecutive months (just over 11 years). In the past 10 years, it has seen significant growth, from real estate holdings worth $150 million to roughly $1.5 billion in properties today.

Whitestone concentrates on high-end clients, but it was still concerned last year by pandemic-related shutdowns, leading it to trim its monthly dividend in April 2020 from $0.095 per share to $0.035 per share. As of this past April, the monthly dividend is up to $0.035833 a share, which at its price on Friday, works out to a yield of 4.60%.

A better measure of a REIT's dividend safety than its cash dividend payout ratio is the funds from operation (FFO) payout ratio. In the past quarter, Whitestone paid out a quarterly dividend of $0.1075 per share but it brought in $0.24 per share in FFO, meaning its FFO payout ratio is only 44.7%, a very conservative ratio that means the dividend is well covered and can easily be raised.

The company's second-quarter report shows that the company's properties have an 89.9% total occupancy rate, and all of its numbers appear to be on the upswing. Through the first six months, the company reported revenue of $59.7 million, up 11% year over year, while its FFO core was $22.1 million through six months, up 10% over the same period in 2020. It also strengthened its position by trimming debt by $47.6 million compared to last year.

At its current price, the stock has an annual FFO-to-price ratio of 0.869, which makes it seem underpriced.

Stag Industrial has seen its shares rise more than 30% this year. That has brought the yield down a bit, to 3.46%, but that's still impressive compared to the S&P average of 1.30%. Stag gives investors a monthly dividend of $0.120833 per share and has raised it for seven consecutive years.

The company concentrates on single-tenant industrial properties, with 40% of its portfolio connected to e-commerce, according to Stag. Its portfolio is diverse with no one client responsible for more than 4% of its tenant revenue.

That means there's likely plenty of growth ahead for Stag and its clients. A report by Grand View Research puts the compound annual growth rate (CAGR) of e-commerce between 2020 and 2027 to be 14.7%, reaching a market size of $27.15 trillion by 2027.

The stock's annual FFO per share for the trailing 12 months is 2.612, a little pricier than Whitestone, but still much lower than a typical REIT. 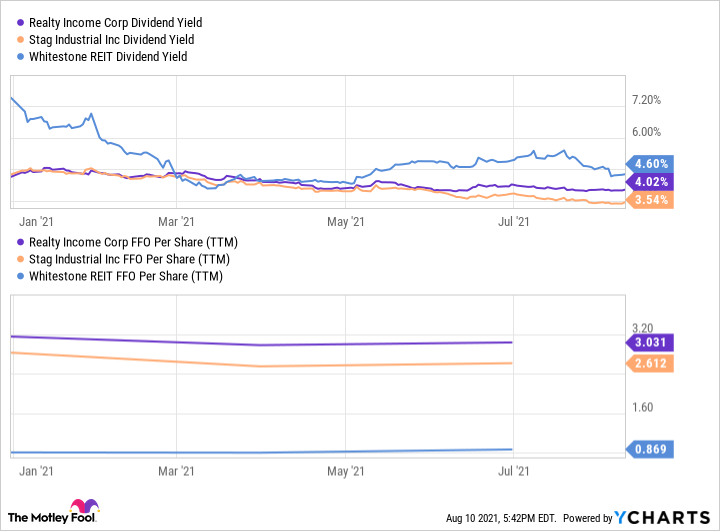 Realty Income has set the standard

Realty Income's stock is up slightly more than 20% this year. The company pays out a monthly dividend of $0.2355 per share, giving it a yield of 3.93%. There's little risk in the dividend; it has been paid out for 613 consecutive months and has been raised for 95 consecutive quarters with a CAGR of 4.4%.

The client base is apparently solid, with the company reporting that 99.4% of its contractual rent was collected in July.

The company's FFO payout ratio of 86.62% is slightly concerning, but its track record of dividend increases speaks for itself. Of the three REITs, it has the highest annual FFO per share price at 3.031.

Trying to make the smart choice

It nearly always make sense to take the long-term view when judging stocks, and that holds true particularly for REITs, which are ideal for income-oriented investors looking for strong dividends. What you're looking for is yield, but also stability.

That's why I prefer Realty Income over these other two REITs. The company's record of dividend increases and safety allows investors to sleep with fewer worries. But it might make sense to wait for a lower price point since it does seem to be currently overpriced.

I also like Whitestone over Stag Industrial because of Whitestone's higher yield, lower FFO-to-payout ratio, and its business model of high-income properties in growth areas. While its yield is greater than Realty Income's, that's not enough to make up for Realty's consistency.