Your mortgage, phone, and electric bills all come monthly, so why not get paid monthly?

There's nothing like regular dividends to encourage investors. It's one thing to get paid quarterly, but getting paid every month is even better, particularly if the yield is more than 4%.

Monthly dividend stocks are often real estate investment trusts (REITs) or business development companies (BDCs), which tend to be diverse investments. Instead of relying on the sales of one or two blockbuster products, they generally have multiple revenue streams from multiple companies.

Three monthly payers that I like right now because of their share growth and high dividend yields are Gladstone Investment (GAIN 1.78%), STAG Industrial (STAG 1.84%), and Realty Income (O 1.88%). 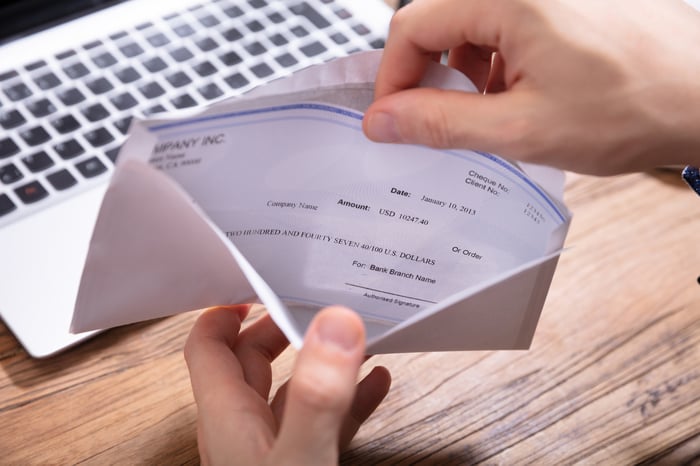 Gladstone Investment's shares are up more than 59% over the past 12 months, and more than 23% since the start of the year. The company increased its monthly dividend 2.94% in January 2020 to $0.07 a share, giving it a yield of 6.71% at its closing price on Thursday. It has handed out a dividend for 186 consecutive months and has not trimmed its dividend since 2009.

Like REITs, BDCs can avoid income tax as along as they distribute 90% of their taxable income to shareholders, the main reason their dividends are so good. The downside to this is they must raise capital from debt and equity markets, meaning they may have a hard time raising capital in a prolonged downturn, making them riskier than typical stocks.

Gladstone has concentrated on a diverse client base, helping to alleviate some of that risk. As of Dec. 31, it was investing in 28 companies over 17 states and 13 industries.

BDCs can be hard to analyze, but to me, the best ones show a steady growth in tangible book value, the value of the total net assets of a company not including any intangible assets. Over the past five years, Gladstone's has risen 23.82% while its total return price has grown 176.8%. 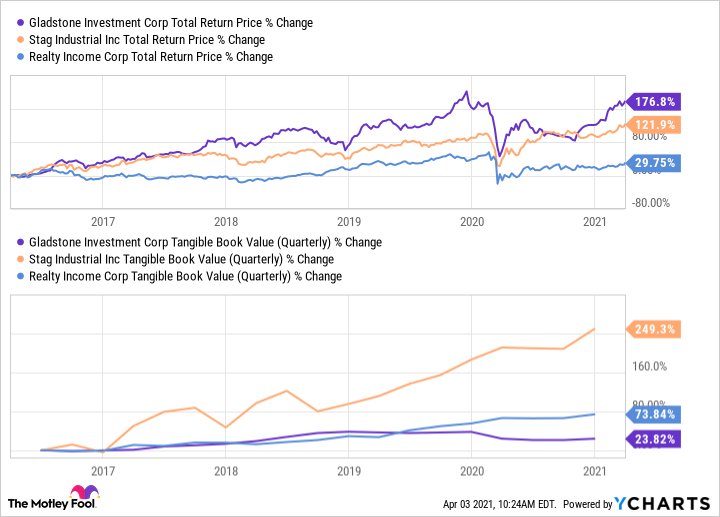 STAG Industrial is a REIT that specializes in industrial commercial real estate. Its shares are up more than 56% over the past 12 months and more than 10% over the past year. The company offers a monthly dividend of $0.120833 per share, which equates to $1.45 per share a year, giving it a current yield of 4.2%.

The quality of STAG's tenants, which include Amazon, the General Services Administration, and Ford, among others, makes it a more secure choice. The company said in a recent report that more than 60% of its tenants have annual revenue in excess of $1 billion.

In the fourth quarter, STAG reported that its buildings had an occupancy rate of 96.9% on the total portfolio and 97.2% on the operating portfolio. As of Feb. 10, it had collected rent on 99.6% of those buildings for the year ending Dec. 31, 2020.

The company has a lot of momentum behind it. It showed net income of $196.7 million for 2020, a rise of 349% year over year. The company's core FFO was a reported $288.7 million, up 21.6% year over year. Much of the property STAG owns is in warehouses, and the growth in e-commerce has kept warehouses a hot commodity. According to U.S. Census Bureau statistics, e-commerce sales accounted for $791.7 billion in 2020, an increase of 32.4% over the prior year. And the percentage of e-commerce of retail sales increased to 14% last year, a rise of 3% over the prior year.

Over the past five years, STAG has increased its total return price by 121.9% while increasing its funds from operations (FFO) per share by 99.77%.

Realty Income is built for the long haul

No monthly dividend portfolio is complete without the aptly named Realty Income, which joined the S&P 500's Dividend Aristocrat list in 2020. Realty has delivered a dividend for 607 consecutive months and raised that dividend for 93 consecutive quarters.

The company's shares are up more than 42% over the past 12 months and more than 4.7% this year. The REIT just raised its monthly dividend to $0.235 per share, representing an annual dividend of $2.82 a share and a current yield of 4.33%. This is a company built for long-term investors. If you had invested in the company when it was first listed on the New York Stock Exchange in 1994, you would have an average compound annual return of 15.3%, which compares favorably to the S&P 500 average of 10.4% or the Nasdaq Composite average of 11.4% over that time.

Realty Income is big and diverse, with more than 6,500 properties that hold long-term leases and tenants such as Walgreen Boots Alliance, FedEx, Walmart, CVS Health, and Dollar General, all of whom have high credit ratings. While some of them faced financial headwinds because of the pandemic, Realty Income continues to get paid. It collected contractual rent at the rate of 93.6% in the fourth quarter.

You don't have to choose just one

There's no reason why investors can't have all three of these nest eggs in their basket. Realty Income is the easiest choice because of its dependability and because it should fare better this year as businesses open up. STAG Industrial was able to take advantage of the e-commerce explosion last year, and while e-commerce may not grow at the same rate this year, that trend isn't going backward. It's also a good bet because of its diverse and elite tenant base. Gladstone Investment carries more risk than the two REITs, but will also reward investors with a bigger yield on the dividend.