Tradeweb Markets is a trading platform for institutional investors that continues to grab market share.

Robinhood's appeal is based on its goal is to "democratize finance for all," but it's not the first trading platform to open up a previously intimidating market. Tradeweb Markets (TW 0.83%) helped bring trading into the modern digital age for institutional traders -- like pension funds and insurance companies -- over two decades ago.

Since 1996, Tradeweb has been a key player in digitizing U.S. Treasury trading, with an electronic trading platform that brought trading online. You could make the argument that Tradeweb was even an early generation fintech company.

While Tradeweb has been around since the late '90s, it's only been publicly traded since April 2019. During this time, Tradeweb has returned about 150%, compared to the S&P 500's 62% -- and this only tells part of the story. The company has seen strong growth as it's expanded its platform and product offerings over the years, and it's taking an increasing share of the market from the competition, making this a stock worth watching.

Tradeweb provides electronic trading on its various platforms for large institutional customers like hedge funds, central banks, and wholesale traders such as market makers. The company serves 2,500 clients across 40 different product types, and makes money from transactions fees, commissions, and subscription fees. Its largest products are focused on interest rates (which includes assets like U.S. Treasuries) and credit (which includes things like corporate debt).

In the second quarter, Tradeweb grew revenue 23% from the same period the year before, to nearly $261 million. Expenses grew just 13%, a sign of improving profitability, which helped net income grow 56% to $66 million in the quarter. 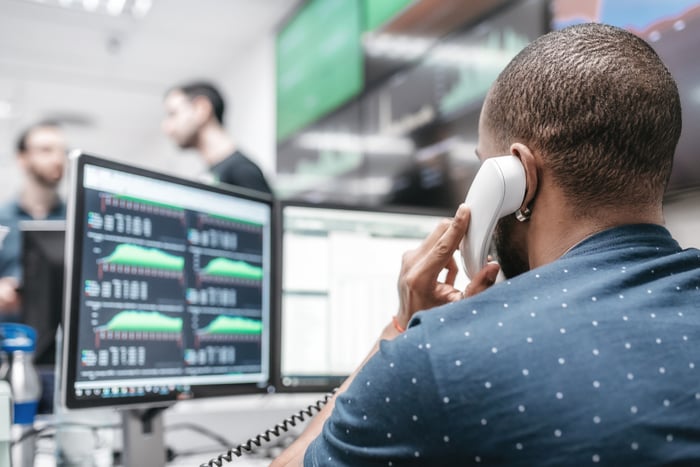 Becoming the platform of choice for many institutional traders

Tradeweb's primary competition is from other exchange operators such as Nasdaq, Bloomberg, Intercontinental Exchange, and CME Group. According to data from Greenwich MarketView, as reported by Bloomberg, Tradeweb has the second-largest share of electronic Treasuries trading, trailing only CME's BrokerTec platform.

In the past five years, Tradeweb's revenue has grown at a stellar 14.6% compound annual growth rate (CAGR), and the company continues to grab market share from the competition. In the first half of the year, its share of the U.S. Treasury market was 15.8%, up from 13.8% last year and over double its 2016 market share of 7.5%.

Investors should pay attention to this

Tradeweb's business is sensitive to a slow trading environment, where volatility tends to be lower. Lower volatility means tighter bid-ask spreads, which is the difference between the highest price a buyer will pay and the lowest price a seller will take. In times of high market volatility, the bid-ask spread can widen, which can benefit a platform operator like Tradeweb. However, when the bid-ask spread is smaller, it can negatively impact the trading volume -- and ultimately the bottom line.

Trading activity could slow down if easy monetary policies continue, such as near-zero interest rates and quantitative easing, which tend to lessen market volatility. For this reason, Tradeweb has worked to diversify fees across fixed and variable rates while growing its electronic trading platform. It believes secular growth trends in electronic trading can help it weather lower-volatility periods.

The company has jumped on early opportunities to facilitate China bond trading, in addition to expanding the trading on its rates products with its recent acquisition of Nasdaq's U.S. fixed income trading platform for $190 million. The deal closed at the end of June, with Tradeweb President Billy Hult saying "we can continue to focus on expanding the number of wholesale U.S. Treasury market participants on our platform and driving further growth on Dealerweb." Tradeweb's growth continued its strength in July as the company announced an average daily volume of $972 billion, an increase of 34% from the same month last year.

Tradeweb has done a stellar job of building its trading platform, and is increasingly the platform of choice for many big institutional traders. Lower volatility could be a headwind for earnings, but the company expects its added market share will more than make up for it, putting Tradeweb on strong footing in the institutional trading space for years to come.

Here's Why This Fintech Is a No-Brainer Growth Stock

3 Reasons This Growth Stock Could Be a Monster
376%